Jackie Chan and Chris Tucker reprise their roles from the first film, although this time the setting is Hong Kong. The two decide to spend their vacation there, but a bomb explodes killing two U.S. customs agents who had been investigating a counterfeiting ring and the two get involved with the case and go after the Triad criminals who were responsible. Also with John Lone, Zhang Ziyi and Roselyn Sanchez. [1:45]

SEX/NUDITY 4 - A bare-chested man loses the towel that was wrapped around his waist and we see his bare buttocks, and two naked men are kicked out of a car and run through the street with their private parts covered by trash can lids and newspapers. A man watches a woman (through a telescope) undress down to her bra and panties which expose cleavage and part of her buttocks. Two men in a massage parlor are shown a group of scantily clad women (we see lots of cleavage and midriffs and thighs) and are told to choose. We see two men getting massages from women wearing sheer bathrobes over thong panties and bikini tops. A woman opens her bathrobe and we see her bra-covered breast. A man removes his bathrobe and exposes his bare chest, and we see several other bare-chested men. A man flirts with, and makes suggestive remarks to many women throughout the movie, and a man flirts with and makes suggestive remarks to two men (he is presented as a gay stereotype). A man thrusts his hips suggestively while singing on stage. A group of scantily clad women dance suggestively, and we see women at a party in evening gowns that reveal cleavage, backs and thighs. A woman kisses a man in appreciation. A man and woman dance close and she runs her fingers through his hair.

VIOLENCE/GORE 6 - A man is shot and falls off the back of a ship, a woman is shot and we see her bloody arm, and a man is stabbed and we see the bloody knife in his chest while he lies dead on the floor. A man falls out a window and crashes into a car below (we see this scene again in the outtakes during the end credits). Two women wrestle over a gun and shots are fired into a crowded casino. Two men fight a large group of men with lots of kicking, punching, flipping, jumping; one man uses a trash can and a chair to defend himself. A man chases a group who run up bamboo scaffolding, he catches up with them and they fight with kicks and punches, and several men fall to the ground (we hear them yell on the way down and crash when they hit). A woman with a sword fights with a man; he dodges the blade using chairs and a roulette wheel to defend himself. A man fights with a group of men with punching and kicking and several of the participants end up falling off a ship. A group of security guards chase a man; he throws money and coins in their way and then punches and kicks them. Two men fight briefly and end up grabbing each other by the throat. Two women fight with high kicks and punches. A woman kicks a man in the face twice and knocks him out, a woman hits two men on the head with a gun knocking them out, and a woman kicks and slaps a man in the face. Two men are kicked and punched and locked in the back of a truck, and two men are kicked and punched and thrown into a dumpster. Two men jump from a window and dangle from wires high over a street, the wires break and they careen into a flagpole that they spin around and then land on the ground and are nearly hit by two trucks. A man is hit in the chest with a pole, falls off the roof of a building and dangles from a bamboo pole, and another man is pushed off a rooftop and hangs from a pole. A man is nearly pierced by a spear. A man is punched in the face and kneed in the groin. Two men fall to the ground when the pole they are dangling from breaks, a man crashes through a window and lands on the floor, and a woman jumps through a window. A woman throws a knife which pierces the apple another woman is biting into (there is no resulting injury). There are two explosions in buildings; we hear about two people having been killed and we see people being blown through the air, a fire burning and people running and screaming. There is an explosion which blows up a casino table causing people to run and scream, and a woman carries a bomb which explodes. A woman is knocked out when she steps on a spear which flies up and hits her in the head. Two men chase a man and end up facing a group with guns drawn. Several people are threatened with guns several times; a woman shoves a grenade in a man's mouth and tapes it shut. A man shoves a life preserver over a man's head and threatens him. A woman nearly cuts the head off a chicken with a big cleaver, several times. A woman talks about wanting to kill a woman and bury her in the desert, and tells a man that she'll blow his teeth into his brain. Two men kick a door down, grab a package and run frantically thinking it's a bomb. A man climbs (hand over hand) across a mooring rope to gain access to a ship. A man throws a laptop on the floor and stomps on it repeatedly. A man yells abusively at several people in order to create a distraction. Several people are verbally threatened with violence.

MESSAGE - Let go of the past.

(Note: There is an outtake reel that runs during the end credits which includes scenes of Jackie Chan getting injured during the shoot. And another outtake reel has a man talking about sexual activities he'd like to perform on two men.) 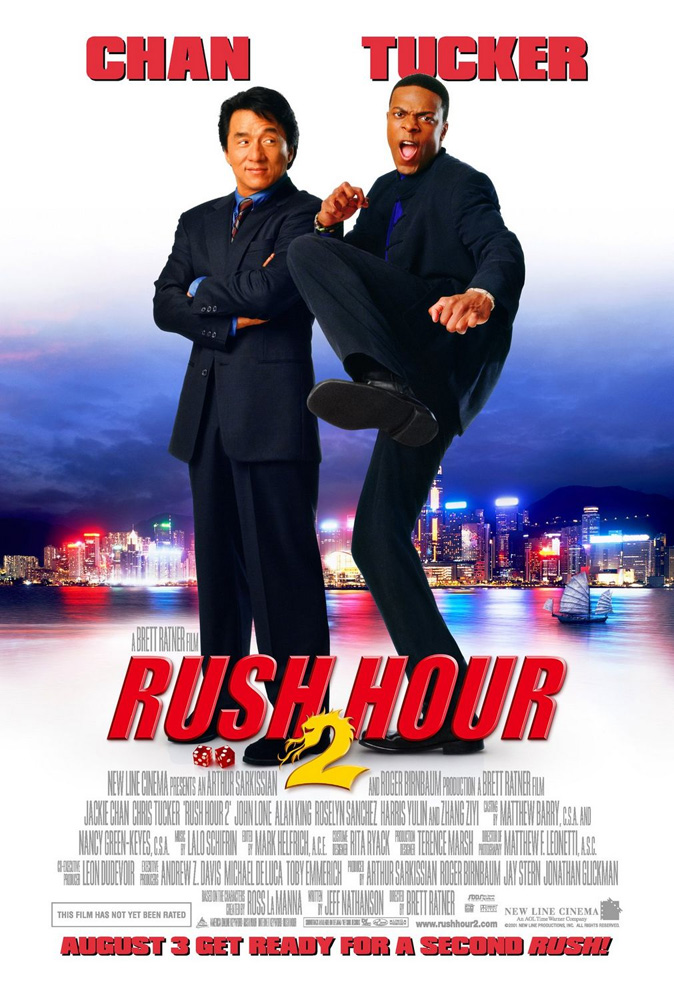