When the son (Seann William Scott) of an underworld kingpin disappears in the Amazon while looking for a priceless artifact, the kingpin sends his "retrieval" expert (Dwayne Douglas Johnson, aka The Rock) to get him back. The two men must eventually join forces to fight their way through the Brazilian jungle, running into very aggressive baboons, rebels, and the henchmen of an unsavory mine owner (Christopher Walken) who wants the artifact for himself. Also with Rosario Dawson and Ernie Misko. Directed by Peter Berg. [1:30]

SEX/NUDITY 5 - A man and a woman kiss several times, and a woman kisses two men on the cheeks. Many baboons gather in trees surrounding two men, one jumps onto a man and begins molesting his chest by thrusting against it, and the others in the trees thrust against the tree trunks. Baboons approach two men who lie immobile on the ground and start thrusting at trees, until one man manages to wave a stick at them and yell. A man accuses another man of "eyeballing" his girlfriend. We see a poster of a topless woman in the distance (we can discern bare breasts). Men and women dance seductively together in a nightclub scene. A man takes off his shirt and we see his bare chest, and another man is shown bare-chested. Women wear revealing outfits that show cleavage, bare abdomens and thighs. A man in handcuffs asks another man to unzip his pants, then he jiggles and wiggles around complaining that he is unable to get his private parts out of his pants in order to urinate, and he asks the man to help him; the man refuses and then we hear a trickle.

VIOLENCE/GORE 5 - A man is shot in the back and falls dead to the ground (we see blood pour from his chest), another man is shot in the leg twice, and another man is shot a few times (he staggers away and then falls dead). Many people are shot by a group of men who crash into a camp. A shootout in a village has one man shooting many other men, one man is trapped in a truck that eventually explodes sending him through the air, and one man beats many others up with punches and kicks. A man is shot at by several men, he fights them with punches and kicks and holds one with a gun in his mouth and holds another at gunpoint. A whip wraps around a man's arm and then his fingers are struck with the whip (we see blood on his fingers). A man is shot twice with bean bags and falls to the ground in pain. An extensive fight scene shows a man fighting with many men; one swings from a rope and kicks and punches the man, then punches him repeatedly in the stomach and face, kicks him repeatedly, and two men swing from ropes and lift the man into the air throwing him into a tree where he crashes into limbs all the way down to the ground. A man throws a hatchet at another man, then they fight with knives and a flaming log. A bar fight breaks out and one man fights several other men: there are punches thrown, kicks exchanged, men are thrown on tables, slammed into the floor, and two men are kicked hard in the knees (we hear cracking); also, a man gets a knee to the face, and a man is hit in the head twice with a turntable. Three men whip and kick a man, then pull knives on him, and they continue to fight with punches and kicks. A man is shot at and a man threatens to cut another man's eyes out. A jeep with two men in it drives off a steep cliff, the two men tumble and bounce down the side of the mountain hitting trees and rocks as they go (we hear crunching and groans and thuds), they land in water and the jeep careens down on top of them. Two men are held at gunpoint by many men. Two men are ensnared by pig snares and hang from a rope around their feet. Many baboons growl, scream and bare their teeth at two men. Huge boulders and timbers begin to crumble and give way nearly trapping three people. A herd of bulls stampede through a village, tearing down buildings and dragging people through the street. A water tower collapses and lands on a jeep and the people in it jump free just in time. A man punches a man in the face twice, the man being punched jumps on the other man's back and holds him around the neck, he is slammed into a tree several times and flung off his back and hard onto the ground. A man and a woman argue and she tries to shoot him. A man breaks a glass bottle on another man's arm, then head-butts him, and the man throws him to the floor and handcuffs him. A man lights a match that ignites methane in a cave. Baboons approach two men who lie immobile on the ground and begin to get aggressive. We hear about poisonous frogs and other things that can kill you in the Brazilian jungle. Three men fall off a platform. People run in panic through a village. We see football plays where players are knocked down hard and then piled upon. A man throws a drink in another man's face. An airplane flies close to cows gathered on a runway. A woman talks about a vicious parasite that can swim into your urinary tract by way of your private parts, which then have to be amputated. Two men hallucinate and fall to the ground unable to move after eating a fruit; the same thing happens to three other men.

MESSAGE - Money can change people. Adventure and danger can make people friendlier toward each other. 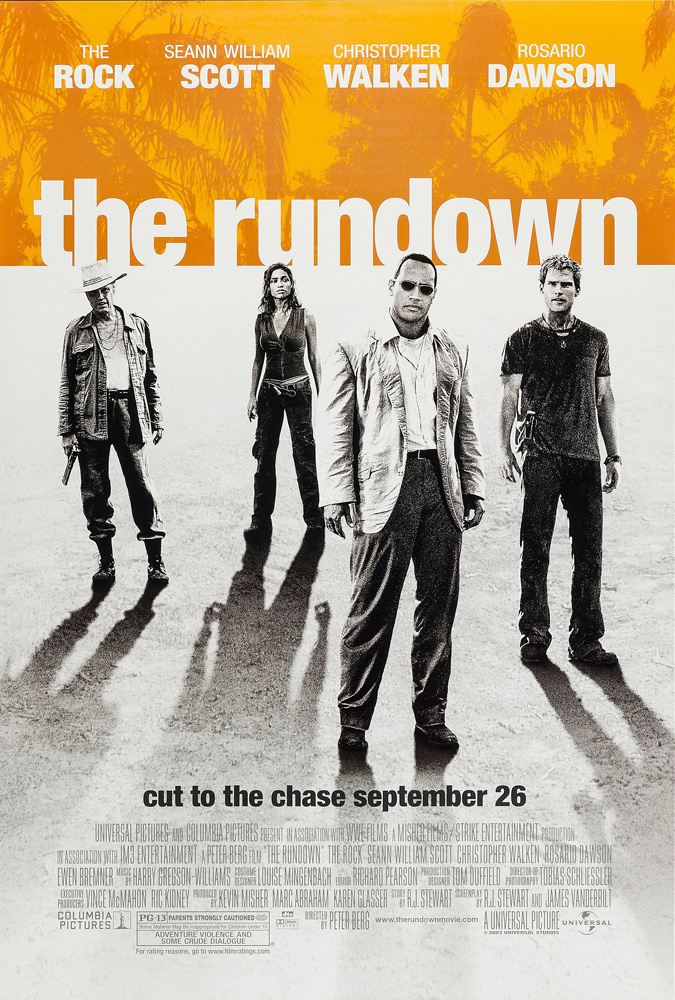