The Nickelodeon babies and their families go on what they think is going to be a wonderful cruise, but end up marooned on a desert island -- or so they think: they soon run into Nickelodeon's Thornberries. Various complications ensue: Nigel Thornberry bonks his head and starts behaving like a 3-year-old, bossy Angelica meets bossy Debbie, and Eliza talks to Spike (who sounds very much like Bruce Willis). Also with the voices of Jodi Carlisle, Christine Cavanaugh, Lacey Chabert and Melanie Chartoff. Directed by Kate Boutilier. [1:20]

SEX/NUDITY 1 - A woman tears off her skirt (she's wearing pettipants) and a man covers another man's eyes (this scene is accompanied by seductive music). A teenage girl wears outfits that reveal her bare legs, cleavage and abdomen. A teenage girl wears a bikini. We see the babies' bare buttocks several times.

VIOLENCE/GORE 3 - A boat with children on board is tossed around during a violent storm; a wall of water crashes onto them, the boat capsizes, and we see splinters of the boat floating in the water. A dog is lost at sea for some time. A leopard growls and surrounds a group of babies, it chases them, they run through jungle, over a geyser and they fall into a cave. A baby falls over a ledge and slides down a hill, a boy runs into a tree, a boy gives another boy a wedgie. A man falls over a cliff, crashes into branches, lands on the ground and is bonked on the head by a coconut. A dog gets pounded by waves as he swims out to sea, he sinks under water and seems unconscious but surfaces again. A dog and a leopard growl, snarl and threaten each other, one falls off a cliff, and one slips down a wall into water. Monkeys bully a smaller monkey. A leopard jumps behind a baby and chases him while snarling and snapping. A girl drives an RV recklessly and crashes into water, where it sinks. A girl drives a bathysphere through water, crashing into things and eventually coming to rest on the ocean floor (we hear that they are running out of oxygen and do not have power to surface). Babies in a jeep crash over a ledge, into crocodile infested water below, they get out of the jeep and begin sinking in quick sand. A man is chased by a leopard, he jumps on a turtle's shell and sails through water while being snapped at by crocodiles. A man panics when he thinks they are marooned on an island. Babies are left unattended and run through a deserted island alone. A girl tries to scare babies by telling them they are going to be lobster food. A woman is hit by a branch, a monkey panics and screams when it thunders loudly, a boy throws muffins hitting a teenage girl in the head and face, a girl kicks a rock and screams, a plant eats a fly, and a baby is wrapped in webbing. People yell at each other several times, in different scenes. A woman vomits over the side of a boat (we hear a splat in the water and gagging). Other icky stuff include: bugs crawl into a baby's mouth, a baby puts a millipede in his mouth to eat it (it is pulled out), a baby puts his finger in his nose then puts it in his mouth, a baby pulls a waffle out of his diaper and he and his friends eat it with ketchup, a dog's nose runs, a bird defecates and it hits a girl in the face, a baby has a caterpillar in his mouth, a boy talks about a "booger farm," a dog says "I ate a diaper once," a baby licks another baby's foot, a man blows a nose bubble, a boy urinates on a tree (we hear the trickle) and we see a dog urinating and marking, a dog sniffs a leopard's backside, birds defecate on a leopard. We see lots of beetles and bugs and a dog says, "I can't smell my own butt." A man gets sand in his mouth when he kisses the ground. Rats swarm out of a boat's cabin, and dogs and cats run wild through a cruise ship.

LANGUAGE 1 - Some name-calling, insults and some mild scatological terms.

MESSAGE - We must always make the time to be together as a family. Stu Pickles is an irresponsible oaf, but a talented inventor. 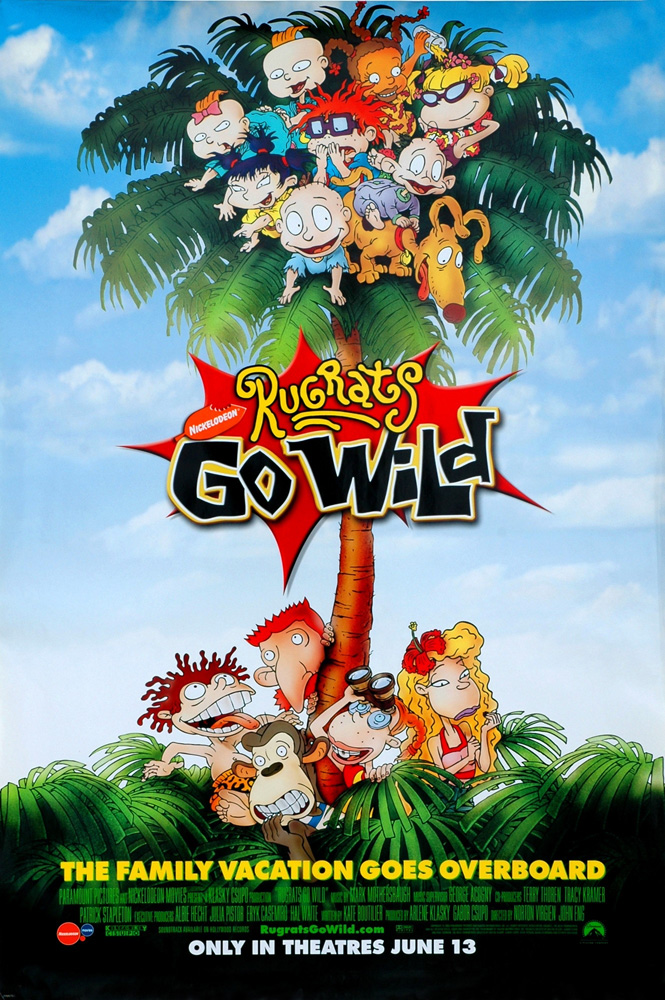