Jerry Zucker of "Airplane" and "Naked Gun 2-1/2: The Smell Of Fear" directs Whoopi Goldberg, John Cleese, Cuba Gooding Jr., Rowan Atkinson, Jon Lovitz and others in the slapstick farce about how far people will go for the chance to win $2 million: Las Vegas casino owner Cleese invites the winners of special slot machine tokens to compete in a no-rules race toward Silver City, New Mexico, while high rollers are betting on who's going to get there first. Also with Seth Green, Breckin Meyer, Amy Smart, Kathy Najimy, Kathy Bates, Dean Cain and Wayne Knight. [1:50]

SEX/NUDITY 4 - We hear a man propositioning a prostitute with a description of what he'd like to do with her. Two women kiss two men, and a man kisses a woman. Two men (brothers) kiss each other on the mouth when they are relieved that they are ok. We see a man in his boxer shorts a few times. A man and woman flirt between two moving cars and show each other their body piercings; the woman opens her shirt and we see the side of one of her breasts. We see a painting with nudes on the ceiling of a hotel lobby. There is a discussion of pornographic movies including a brief description of the content of one entitled "Afro Whores." There is a discussion about strippers being at a bachelor party, and there is a reference to repopulating the earth. There are a couple of references to a man having a sex-change operation. There are references to a woman having had a baby with descriptions of the process.

VIOLENCE/GORE 5 - A man runs toward a speeding train and slams into its side. There is a discussion of killing a man and cutting out his heart. We also see a human heart in a cooler full of ice; the heart ends up dumped on the floor of a car, tossed out the window of a car, and grabbed by a stray dog. A man is hit by a car and flies through the air (he gets up uninjured). A man burns his finger and mouth with a cigarette lighter, and a lit cigarette lands on a woman's hair which catches fire, filling a bus with smoke and causing the occupants to scream in panic. We see a smoldering dog clinging to an electric fence, and a man grabs the electric fence and is shocked. We see a man with a speech impediment and then learn why: he has an infected tongue piercing which has left his tongue blue and full of pus (we see his tongue several times). A woman slips on a glass and tumbles down a long flight of stairs landing hard on the floor. A man is shot at, a man fires a gun at the ceiling over a group of people and a man threatens a couple with a gun. Two men tie their car to a communications tower and the car is pulled up the tower leaving the man inside dangling from the steering wheel; a man who's on the tower falls onto the windshield. Two women in a car roll down a steep hill and fly off a cliff landing on a pile of junked cars; a skeleton pops out of one car and lands on their windshield. A woman flies her helicopter over a couple in a pool, coming down very low; the pool breaks up and the flooding water takes the couple with it. A man is nearly run down by a speeding car and a group of people is nearly run down by a car. A cow lands on two people driving a convertible. A man clings to the hood of a speeding car, and a man and woman hit a man they think is molesting their baby. A woman in a helicopter chases a man in a truck until she forces him off the road and he's knocked out. She drops heavy tools from the helicopter onto the truck denting it. A motorcycle gang bashes a car with chains. A man dangles from the window of a moving truck and the window is closed on his head. A man is punched in the face and is knocked out, a woman head-butts a man while he is driving and the car swerves, a woman punches a man in the face knocking him out and a woman grabs a woman by the neck and threatens her. A man is tossed out of a hot air balloon basket. People race down some stairs and end up in a pile on the landing. Two children jump back and forth on beds and slam into each other with a thud, and two men hit their heads together. A cow dangles from a hot air balloon rope and two men hang from the cow; one man squirts the other with the cows milk. A cow, dangling from a hot air balloon rope, slams into a bus windshield causing the bus to drive off the road and eventually tip over on the shoulder. Also a man dangles from a hot air balloon rope and runs into several cows. A large group of football players surround a referee on the field in a threatening manner and a man is chased by a large group of women. Several people run through a street, crowd through a door, and end up wrestling with each other. A taxi driver strips a man of his pants and shoes and leaves him in the desert; we see him hopping around because the sand is burning his feet. A man talks about a meteor hurling toward earth and that when it hits it will destroy all life (it turns out to be a joke). People drive recklessly in several scenes causing property damage: one car crashes through a fence, two women drive a land rocket and break the sound barrier (a gas station explodes as it flies by), a car crashes through a fence and a monster truck lands on it (the two occupants barely escape), and a bus crashes through a wall. A young girl is forced to have a bowel movement out of the window of a moving car: we see a policeman cleaning the windshield of his car, presumably removing the young girl's excrement. A cow sneezes mucus on a man's face, and a man vomits on a plane that is flying recklessly. An angry woman breaks a phone.

MESSAGE - There's always an angle. Have faith in the goodness of people. 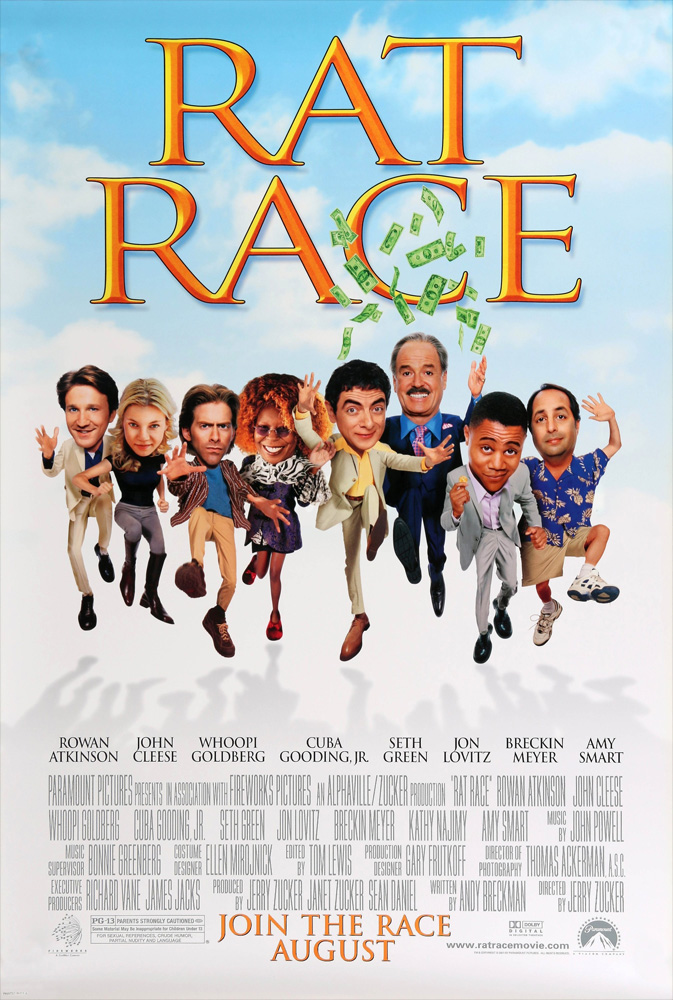