Why is “Pinocchio” rated PG? The MPAA rating has been assigned for “peril/scary moments, rude material and some language.” The Kids-In-Mind.com evaluation includes a couple of marionette hugs, several adventures and misadventures threatening possible injury and harm to a marionette, a cricket and a man, many discussions of lying and dishonesty, and some exclamations and name-calling. Read our parents’ guide below for details on sexual content, violence & strong language. In this retelling of the classic children’s story, the marionette maker Geppetto (Tom Hanks) is grieving for his dead son, and he builds a wooden boy (voiced by Benjamin Evan Ainsworth). Longing to become a human, the marionette is implicated in shady dealings, while also gaining a talking cricket (voiced by Joseph Gordon-Levitt) as his conscience. Also with Angus Wrightand, Cynthia Erivo, Sheila Atim, Jamie Demetriou, Giuseppe Battiston and the voices of Lorraine Bracco and Keegan-Michael Key. Directed by Robert Zemeckis. [Running Time: 1:45]

– A female marionette and a male marionette hug for a few seconds. A woman dances alone slowly in a long white nightgown that is opaque. Marionettes dancing the can-can lift their skirts.
► A cricket leans against a female doll’s behind and says, “Excuse me.”

– A man sends a talking marionette to school, but the teacher physically kicks it on the buttocks and out of the building; the marionette is stopped by a con-artist fox and a dirty alley cat, told he will be famous, and is sold to a sideshow operator where the marionette dances on a platform and falls down some steps (he’s unharmed); he gets up to sing and dance and the operator falls onto a calliope, making it play music too fast and the marionette’s feet spark a fire on the stage and the man throws a bucket of water to extinguish the flames. A fox is accidentally hit by a large mallet and knocked out; it revives and is accidentally hit again with the mallet, staying unconscious and is not seen again.
► A seagull pulls a talking marionette and a cricket across the ocean by a rope (like waterskiing) where they find an elderly man in a small boat with a kitten and a goldfish in a bowl; the marionette climbs aboard and a huge whale with feathery fins and many large, sharp teeth surfaces and swallows them and we see them in its stomach where the marionette rubs his feet together to spark a flame to build a fire with old pieces of wood; the smoke makes the whale sneeze a lot of water and the captives sail out its mouth in the small boat, the boat leaves the whale, it breaks in two and the marionette pushes the half containing the man and animals, swimming fast while his feet make the sound of an outboard motor until they move into a cave and the whale slams against the entrance, unable to go farther (it is not hurt); the characters in the boat end up on a sandy beach, but the man is unconscious and the marionette, thinking he is dead, says, “Don’t die, Father,” cries over him and the goldfish and the kitten look sad until the man revives.
► A talking cricket is captured under a pickle jar beside a road, and he tries to shout several times, but no one hears him; the cricket says he will die in there, when a wagon drives by slowly and the wheels throw a stone knock the jar over and freeing the cricket, who enters the wagon and talks to a caged marionette that tells the cricket several lies, making his wooden nose grow inches at a time until it bumps into a nearby wall; the cricket walks along the nose to take a key from the wall, and unlocks the cage to free the marionette (the marionette’s nose shrinks when he apologizes for lying). Large smoke clouds in an amusement park turn into shadow-ogres that grab children and turn them into donkeys as they are thrown down manholes where we hear that they are sold to local salt mines; a boy in a pool hall turns into a donkey, screaming and braying as he loudly breaks a window, a mirror and furniture, and a wooden marionette grows donkey ears and a tail (they soon disappear) and a cricket is swept down a manhole to the underground.
► A cricket is swept up in a group of galloping horses and smashes against a horse’s buttock unharmed. A marionette is lifted into a horse-drawn wagon full of children driven by a man taking them to Pleasure Island, where misbehavior is promoted. A boy uses a slingshot to shoot a rock that hits a horse causing it to run faster and we hear a thud. Children throw hundreds of loud fireworks onto sidewalks, creating flashes and someone throws a straight back chair through an upper story window from the inside, creating noise and falling glass shards. A marionette becomes upset by kids breaking many cuckoo clocks with hammers, large mallets, and baseball bats.
► A talking cricket enters the home of an elderly man who has built a marionette based on his deceased son; the cricket gets caught in music box gears (it is unharmed), and a hundred cuckoo clocks on a wall chime loudly, opening up with wooden birds, animals, witches and a woman spanking a child. A man trips and falls against walls, setting off many alarm clocks on display. A man prays to a wishing star that a marionette he built might become a real boy. A star grows and beams a bright light onto a photo of a boy, the beam shakes the photo, and it ricochets onto a marionette to bring it to life. A star turns into a fairy with gossamer, feathery wings, that tells a marionette that if he is brave, truthful and selfless, he will become a real boy; with a magic wand, the fairy refines the marionette’s speech and enlists a cricket to become the marionette’s conscience.
► A man locks a marionette in a large birdcage with a padlock in a dark wagon. A police officer locks a sideshow operator in a jail cell. A former ballerina wears a heavy leather brace with gears at the ankle on one lower leg and foot, but still dances alone while wearing the brace. An elderly man takes his kitten and his goldfish in a bowl out into a rainstorm at night to look for a missing marionette.
► A marionette’s arms and legs transform into human flesh as it walks next to a man carrying a kitten and goldfish in a bowl. A kitten sneezes and sprays a little watery mist.

– What counts in life is what is in one’s heart, not the material that constitutes one’s body. 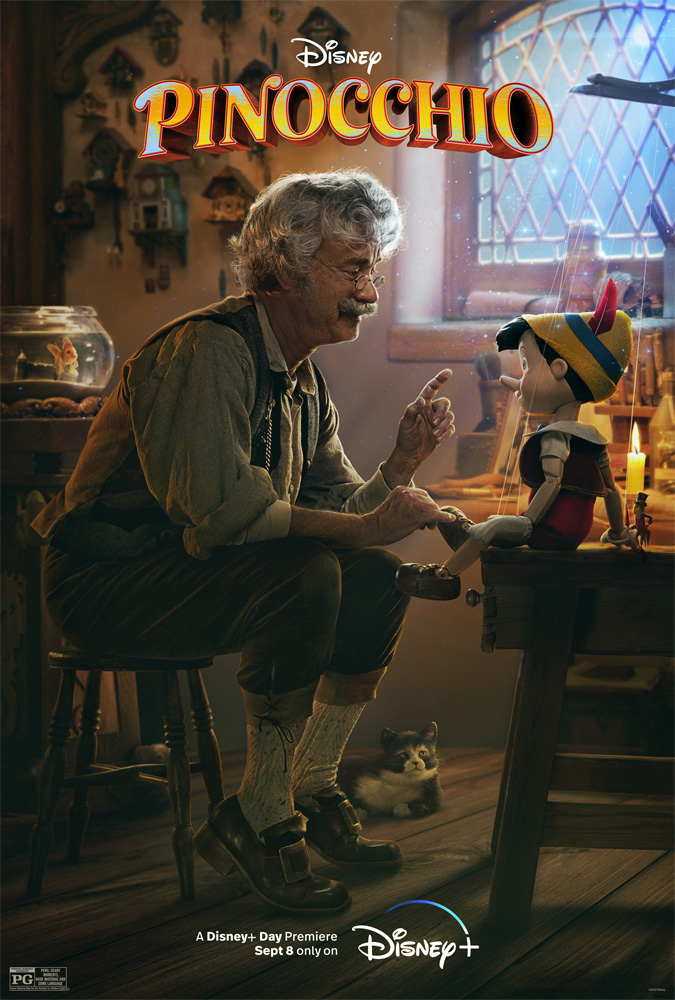