Why is “The Pink Panther” rated NR? The MPAA has not rated this film. The Kids-In-Mind.com evaluation includes several kissing scenes and near sex scenes with lots of innuendo, some of which are between men and a married woman, scenes of infidelity, and several scenes with women wearing cleavage revealing outfits; a couple of gunshots, loud fireworks are set off in an enclosed area causing a lot of smoke and noise, and a pretend fight and many pratfalls played for laughs; there’s no significant profanity. Read our parents’ guide below for details on sexual content, violence & strong language.” The introduction to Inspector Clouseau (Peter Sellers), the bumbling French detective, whose investigations consist mostly of pratfalls and amorous misadventures: An urbane jewel thief (David Niven) romances women and steals from the rich to keep for himself while Clouseau tries to catch him — not knowing that his own cheating wife (Capucine) is the thief’s lover as well as assistant. Also with Robert Wagner, Claudia Cardinale, Brenda de Banzie and Colin Gordon. Directed by Blake Edwards. [Running Time: 1:55]

– A husband wearing a robe stands at the door of a bathroom and makes a seductive facial expression and tries to remove his robe but the belt is knotted; he struggles out of the robe and gets into bed with his wife (off-screen) and we hear kissing and moaning, they stop and the man leaves the room. A married woman goes to a man’s room, where the man is sleeping, and the woman climbs in the bed and whispers in his ear; the man wakes up and kisses her and she pulls away realizing he is not the man she expected to find and she leaves the room (the man makes a comment later about having been left frustrated). A woman and a man (not her husband) kiss and fall on a bed; the man hides under the bed when another man enters the room. A husband climbs in bed with his wife and we hear them kissing off-screen; she says that she is a bundle of nerves, he plays a violin (badly) to calm her and she asks for a sleeping pill. A wife kisses her husband and bites his shoulder, they kiss and get in bed where a bottle of champagne opens and sprays liquid all over them (they scream).
► A woman wearing a night gown kisses a man that’s not her husband. A man and married woman lie on a bed and kiss and talk (both are clothed). A woman dances with a man (not her husband) and she holds him very close. A man tries to kiss a woman and she falls on top of him. A man and woman kiss several times until the woman passes out from drinking too much champagne. A husband and his wife kiss and stumble back into a closet, fall on the floor and struggle to get back up. A married woman kisses a man who is not her husband in several scenes. A man and a woman kiss in the background of a scene. A husband and his wife kiss while dancing. A woman kisses a man on the cheek. A man and a woman dance close together. A man kisses a woman’s hand. A man accidentally kisses a man’s hand when he intended to kiss a woman’s hand.
► A woman yells at a man at a costume party and says, “Take your filthy hands off my asp.” An animated panther makes suggestive gestures and whistles toward a woman’s name in the opening credits (it pants and its tongue flops out of its mouth). A joke is told at a table and a reference is made to someone “turning out to be a man.” A comment is made about a man “having a fling.” A woman talks about a man “keeping 10 girls in the air at the same time.” A woman talks about a man being a “middle-aged bachelor” and talks of his romantic conquests. A man tells a woman that she was “more fun in bed.”
► The camera lingers on a woman wearing tight-fitting pants as she dances and shimmies her hips. A woman wears a dress with a sheer upper bodice that reveals cleavage through the fabric. A woman wears low-cut dress that reveals cleavage. A man showers and we see his bare chest and shoulders. A woman wears a night gown that reveals cleavage. Women wear costumes that reveal cleavage and stocking-covered legs; one woman’s costume is a two-piece outfit that reveals cleavage and her bare abdomen. A painting of Remus and Romulus is shown with a she-wolf nursing the two young boys and the teats are visible.

– A man shoots a gun twice (no injuries are seen). A man trips over a box of explosives and they are lit and detonate in a crowded party; people rush out of the area and we see fireworks bouncing off walls and shooting around the room (no injuries are seen). A man steals from a safe and climbs out a window and down a rope, he is chased by a guard the scurries back up the rope when the rope is set on fire and burns toward him. Two men chase another man across a busy street. A man and a woman are chased by police and the woman changes her clothing in an elevator so she is not recognized (there’s no nudity).
► A man enters a studio and threatens another man, grabbing him by the sweater. A man pokes another man in the nose. A woman slaps a man in the face. A man falls off a balcony and lands in a large pile of snow (he does not appear injured). Two men jump through a window and run away while others chase them; four cars speed around a small square and we hear them crash off-screen (we see wreckage but no injuries are visible).
► We read a newspaper headline about rebels protesting and demanding the return of a precious jewel. A woman talks about “bagging” a tiger. A woman sticks her tongue out at a man and tells a tiger pelt (with the head) to attack the man if he tries to make a pass at her. A woman tells a man that she would have him tortured.
► There are many pratfalls and other physical comedy played for laughs with no resulting injuries: A wife accidentally hits her husband in the face when she opens a closet door (no injuries), a woman coughs hitting her head on a bar and leaves the room coughing (she’s OK later), a man spills sleeping pills on a floor and we hear them crushing under his feet as he walks through the room (off-screen), a man steps on a violin breaking it in half (he says it is a Stradivarius), a woman skis down a hill and falls in the snow, and a man touches a hot fireplace chimney and puts his hand in a beer stein (the hand gets stuck and he struggles with the help of another man to get it out).
► A man on skis follows a woman on skis down a slope and she yells that someone is stealing her dog in a sleigh at the bottom of the hill; the man skis after the sleigh and he inadvertently jumps over a mound of snow (we see him on a stretcher later and using a cane later as he recovers). A man skis into another man and falls on the ground. A man falls backward in a chair.
► Two men pretend to fight until the first man punches the other in the face and he falls to the ground (we do not see any injuries). A woman skis past a man on a slope and he watches her with binoculars.
► An animated hand wearing a glove holds a gun toward a panther and it turns the gun on the glove, fires and the panther is enveloped in a cloud of smoke. An animated panther is singed by the flash of a camera (we see its fur turn gray). An animated panther is run over by a can and flattened (it is OK). A hammer hits an animated panther’s paw. A tiger pelt and head is shown on the floor of a scene and a woman lies on it, pretending to talk to it. A man accidentally puts his hands in bowls of porridge.

The Pink Panther SUBSTANCE USE

– While you may think you’re a detecting genius, there’s a good chance you’re missing major clues right under your nose. 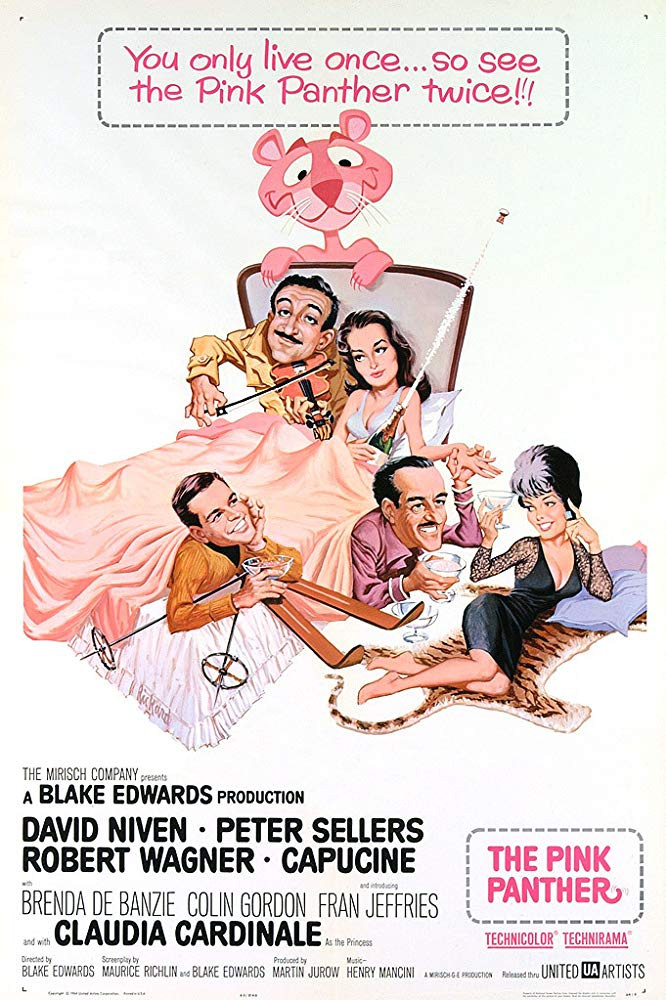