Set on a voyage for 120 years, a spaceship travels to a planet which 5,000 people from Earth plan to colonize. Along the way, two of the hibernation pods open and the occupants (Jennifer Lawrence and Chris Pratt) are revived 90 years too early. Also with Michael Sheen, Laurence Fishburne and Andy Garcia. Directed by Morten Tyldum. [1:56]

SEX/NUDITY 5 - A woman is shown straddling a man in bed and she appears nude (we see her bare back, legs and buttocks) and it is implied that they have sex. A man and a woman kiss (we see her bare back and the side of her bare breast along with panties and partially bared buttocks) as they move toward a bed where it is implied that they have sex. A woman pushes a tray of food off a table and climbs across toward a man seated on the other side; she straddles him and they kiss, he picks her up and lays her on the table and it is implied that they have sex (we see his bare back).
► A fully nude man walks in a hallway and we see him from the back (his bare back, buttocks and legs are visible). A fully nude man showers and we see his back, side and bare buttocks. A woman tells a man to turn around and she drops her dress on the floor (we see her bare shoulders and upper chest briefly before she puts on a spacesuit). A woman wears a low-cut sport top while jogging that reveals cleavage in several scenes. A woman wears a mesh swimsuit that reveals cleavage, abdomen (through the mesh) and bare legs. A man and a woman wear tank T-shirts and shorts while playing basketball (cleavage, bare shoulders and bare legs are seen). A woman wears a dress that reveals bare shoulders, back and legs to the thighs through a slit in the front. A woman wears dresses and night gowns that reveal cleavage, bare shoulders and legs in several scenes.
► A man and a woman lie in bed together partially covered with a sheet (we see his bare chest and upper abdomen and her bare shoulder and leg to the thigh). A woman climbs into a medic bay and kisses a man that had been treated there. A man and a woman hug and kiss in several scenes.
► A man asks a woman on a date and she accepts. A woman talks about her father having lovers.
► A man watches a woman swimming and smiles. A man and a woman do a dance competition with holograms and we see some hip thrusting movements. A man rests his head on the chest of a spacesuit and holds the glove as if it is a hand.


VIOLENCE/GORE 5 - The gravity in a spaceship fails and a woman is trapped in the water of a swimming pool; she struggles to reach a surface to breathe but is encased in the water and falls limp (she seems to drown, but is OK eventually); a man floats in another room and is slammed to the floor when the gravity is restored (he has a bloody nose). A passage is opened and a woman is sucked inside (there is a hole in the hull); she hangs on and a man tries to keep the doors open using his body (he is squeezed between the doors and he yells in pain). Pressure pushes bolts out of a framework and a bolt is driven into a woman's arm; she pulls it out and we see a bloody hole remaining. A man in an access tunnel is blown into space by flames and his tether is cut (he floats in space); his suit has a hole in it and he loses pressure (we see his mask crack and frost builds up on his face, presumably dying).
► A spaceship moves through an asteroid belt and is struck by a large asteroid causing its systems to fail and reboot. A spaceship slingshots around a star and we see a man and a woman on an observation deck as they pass very near it.
► A man wakes up to a woman standing over him; the woman punches him several times in the head and body, then kicks him, pounds on him and raises a crowbar over his head (she does not his him with it). A man slaps an android in the face and hurts his hand. A woman hyperventilates and screams in anger, then throws something against a wall and it shatters. A woman drags a motionless man to a medic bay and instructs it to perform many forms of resuscitation including injections and defibrillation against the advice of the computerized doctor and the computer says, "He's dead."
► A man uses a sledgehammer, a jackhammer, a blowtorch and other tools to try to get into the bridge of a spaceship, with no luck. A woman uses a sledgehammer on an access door and is unable to make it open. A man walks through a spaceship and finds that he is completely alone; he learns that his hibernation pod opened 90 years before it was supposed to. A man works out with a heavy bag and punches it violently.
► A hibernation pod opens and its occupant is injected in the arm with something to revive him; he is disoriented and tired but otherwise OK. A hibernation pod opens and a woman inside is jolted and injected with something to revive her. A man riding in an elevator floats briefly when gravity lapses. A man tries to reset his hibernation pod where he gets stuck briefly and then gets out unharmed. An android goes haywire and slams his head into a bar top (we see large gashes on his forehead and nose), and then breaks many glasses before being turned off.
► A man, not wearing a protective spacesuit, enters an airlock and considers pressing the hatch release (he does not). A man puts on a spacesuit and exits a ship attached to a tether. A man and a woman put on spacesuits and exit a ship attached to tethers.
► We hear that a spaceship carries 258 crew members and 5000 passengers in hibernation as it moves through space on autopilot for 120 years. A reference is made to "hibernation sickness" as a man holds his head and seems to be in discomfort. An android says, "We all die." An android says, "I have no legs." A woman says that her father died of a heart attack. A man tells a woman, "You kill me." A man talks about wanting to kill himself. A man is upset and yells when he finds a tree planted in a market place. A man is given a negative prognosis by a computerized doctor and he wheezes and cries. A woman says, "We're gonna die."
► A man coughs violently and spits blood into his hand. A man spills food on the floor to activate robot vacuums, as if he is feeding animals. A woman says, "I'm gonna be sick," but she does not vomit. A man dies and we see his body being put out into space.

SUBSTANCE USE - A man is injected in the arm with something to revive him while in a hibernation pod, and a computer dispenses sedatives for a man to relieve pain (he does not take them). An android pours whiskey for a man and the man drinks in a bar in many scenes throughout the movie, a man orders a drink in a restaurant and a robot tells him that he has had many already (the man pleads and the robot agrees to bring him another), a man drinks from a bottle of what appears to be alcohol and throws it when it is empty (it does not break), a man and a woman drink champagne in a bar, a man and a woman drink wine in a restaurant, and a man and a woman drink martinis in a bar. 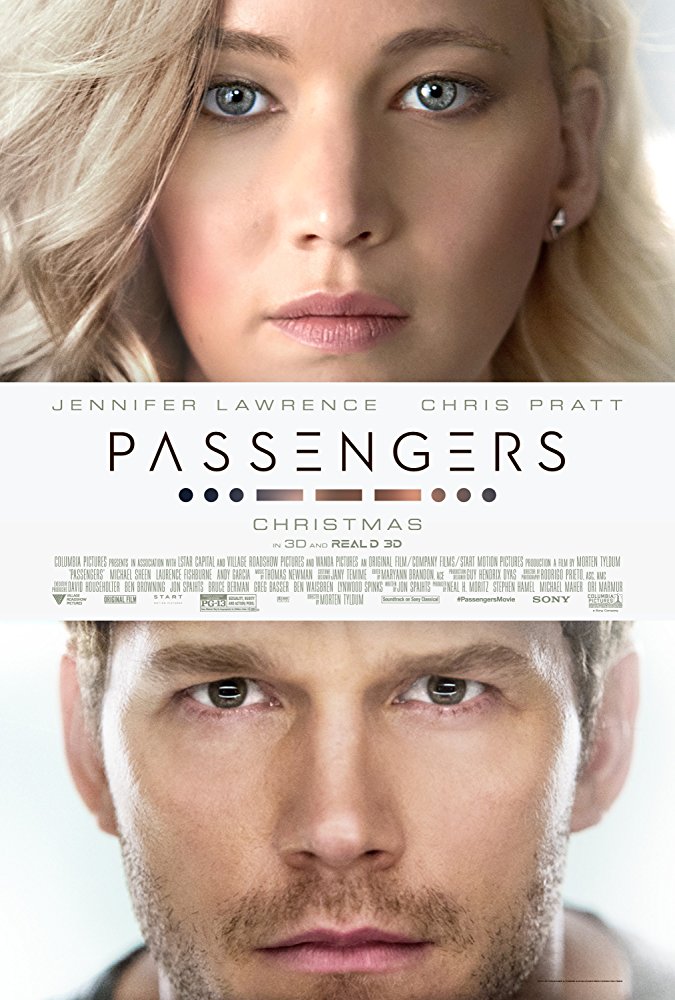