In this fourth installment it is five years after the disappearance of Katie (Katie Featherston) and her son (Brady Allen). Suddenly, the two show up in a new town, where they move into a suburban housing development and a family across the street witnesses strange events. Also with Kathryn Newton & Matt Shively. Directed by Henry Joost and Ariel Schulman. [1:28]

SEX/NUDITY 2 - A teen boy films himself placing his hand on a young woman's clothed thigh and she laughs. A teen boy and a teen woman sit in front of a computer in her bedroom when her mother tells them to keep the door open whenever a male friend is in the room and they roll their eyes.
► A teen boy tells a teen girl that he has had sex three times, with four girls and they both laugh. A teen boy tells a teen girl that a neighbor boy was trying to "cop a feel" when the boy touched her shoulder in a recorded scene that the teen sees on her laptop.
► A teen girl wears short-shorts in most scenes that reveal most of her bared thighs. A teen girl wears skin-tight jeans. A teen girl wears an off-the-shoulder sweater that reveals part of one shoulder. We see a photo of a teen girl wearing a strapless ballet dress that reveals cleavage. A young boy is shown shirtless, and we see that his back and chest are covered in crayoned symbols and shapes drawn by a playmate. We see a boy in a bubble bath where his bare shoulders, arms and lower legs are exposed. A man sits on a couch, wearing a T-shirt and shorts.

VIOLENCE/GORE 6 - A woman feels wind inside the house, and an unseen force throws her up to the ceiling and slams her onto the floor, dead; a strange woman appears suddenly and drags her off screen. A teen boy enters a house, a strange woman appears behind him, twists his head sharply breaking his neck and drags him into a closet.
► A woman in a home video tape has blood covering her abdomen and shoulders while a man appears unmoving on a couch (he's presumably dead); the woman walks into a bedroom where she knocks another woman unconscious and steals a baby boy.
► A teen girl is grabbed, thrown and blown back several times by unseen forces: she hears a boy's voice and finds him in the kitchen in a trance, and a woman in a hallway nearby distorts her face to look like a pale, gape-mouthed vampire with black lips and huge fangs, charging toward the girl and roaring; the girl steps to the back door where many zombie women shuffle toward her and close behind her brother (still entranced) and the scene ends.
► A teen girl is trapped inside a garage as the door closes and locks itself when a car switches itself on, races its engine and fills the garage with smoke and CO; she smashes the car windows with a golf club, enters the vehicle, and drives it backward quickly to break through the garage door.
► A teen girl and her laptop video recordings witness black humanoid shadows running through a house at all hours. We see larger and smaller black shadows flying through the house, and an outline of a small child or alien creature walking through stars projected by a video game attached to the TV set several times. A strange woman appears suddenly in a house several times, sometimes appearing first as a starry outline, and then becoming solid.
► A teen girl and a teen boy set up a 24/7 video recording scheme on a laptop to film any odd events in the girl's house after a neighbor boy moves in with her family: we see shadows and odd human outlines in the night, we see two straight back chairs move themselves and a tricycle pedal itself across a room during the day and the girl's young brother enters her room in the night and stares at her in her bed; the quilt covering her whips off violently and she levitates slowly and high into the air.
► A little boy in a bathtub is dragged underwater as the tub seems to boil and after several minutes he sits up seemingly in a trance. A chandelier crashes at the feet of a teen girl, causing her to scream loudly. A teen girl is blown back onto her floor when she opens a closet door. In a kitchen, a large cutting knife used by a woman flies up into the air and disappears and the woman looks confused; that night, as her husband walks into the kitchen, the knife plunges down and sticks deeply into a countertop. A man goes into a dark house where his young son had gone with a strange woman and he disappeared. A teen boy pulls a teen girl off her bed quickly by her feet to scare her and she screams.
► A basketball bounces down a staircase by itself, doors open and close without help, a toy train starts up on its own and chandeliers swing.
► At 2:30 AM one morning, several carloads of people drive up to the house of a woman who is in the hospital; a teen girl wakes up across the street, walks over to investigate, and is scared away by a woman suddenly appearing standing at the gate.
► After the closing credits, a man with a handheld camera films the inside of a Mexican market that features magic charms and an elderly woman appears and begins to speak in Spanish; the man runs from the market, mumbling unintelligibly and sounds frightened.
► Two little boys in separate scenes talk, sometimes yelling, to a switched off TV screen in the middle of the night (apparently to some type of spirit entity). A teen girl finds crayoned symbols in a bedroom and she and a teen boy look them up on the Internet where they find that the symbols represent a fertility symbol of a demon that inhabits bodies of young children. A teen girl screams at her parents saying that she almost died in their garage and that she is not crazy, that there are real noises in the house and real invisible forces at work. A teen girl becomes increasingly frustrated when the "creepy neighbor boy" speaks to an invisible friend and tells her young, adopted brother that his (brother's) "original family" wants him back. A young boy moves in with a family and he tells the family that his special silver fork tells the future. A husband and his wife do not believe their teen daughter when she says she is afraid of supernatural forces brought into the house by a visiting neighbor boy. A teen girl says that she feels as if she were hit by a truck. A young boy wanders a neighborhood alone. A boy lies down next to a teen girl (she's asleep) late at night and places a hand on her shoulder. Sirens sound off screen and we hear that a woman was taken to a hospital.

SUBSTANCE USE - A father becomes angry when told by his wife that their teen daughter will be taking psychiatric medications. A man sits on a couch with two empty beer bottles on the coffee table, a woman sits on a couch and drinks wine, and we see a wine rack containing a dozen bottles of wine. 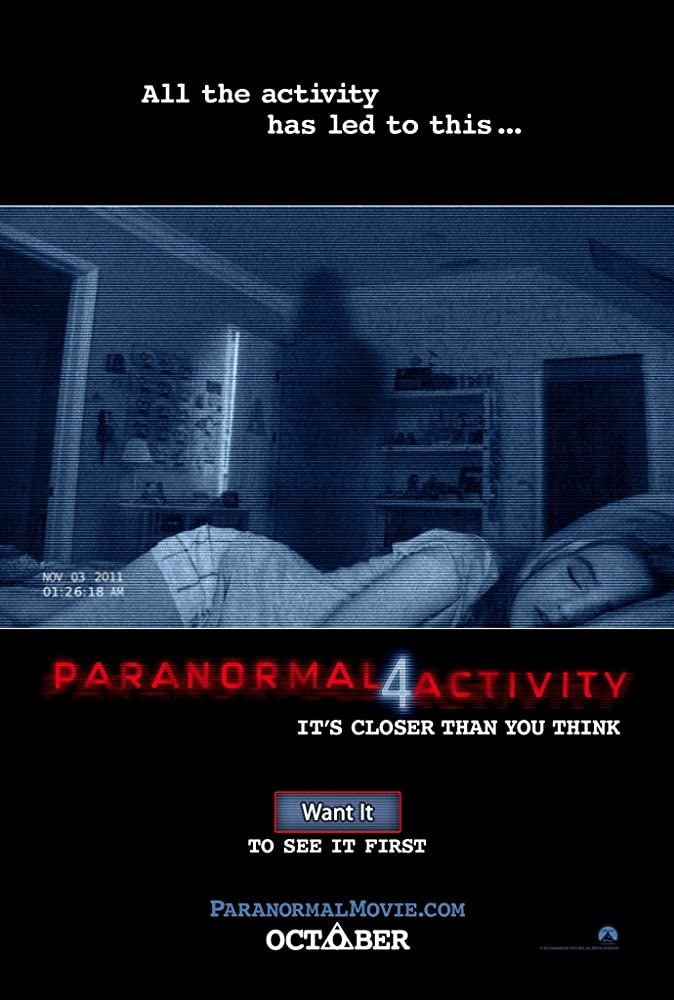