After two families, one Israeli and one Palestinian, discover that their sons were accidentally switched at birth, they must confront their cultural and religious differences while trying to embrace their children. With Emmanuelle Devos, Pascal Elbe, Jules Sitruk and Mehdi Dehbi. Directed by Lorraine Levy. In French, Hebrew and Palestinian Arabic with English subtitles (original title: "Le Fils de l'autre"). [1:45]

VIOLENCE/GORE 5 - A man attacks a young man as he walks along a beach, three other men join in, and one man stabs the young man as a second young man and then a third young man come to his aid; we see the injured young man on the ground with blood on his stomach and we then see him in the hospital with a large bandage over his eye while the second young man that had come to his defense is seen with two stitches on his forehead and a black eye.
► A young man shouts at another young man, grabs a can of soda from him, throws it on the ground, and then shoves him. A young man shoves past his older brother as he walks through of doorway. A husband shouts at his wife and slams a glass against a table repeatedly. A wife shouts at her husband. A wife shouts at her husband and he sighs angrily. A young man is upset and rushes out of a room shouting. A young man shouts at another young man (they were raised as brothers). A young man shouts at another young man.
► Two women are obviously upset when they are told by a doctor that their sons had been switched at birth and we see them crying. A young man angrily rips off his T-shirt and throws it on the ground.
► A woman tells another woman that her son died. A young man asks his older brother (they were not raised together) if a photograph was of his dead younger brother and the young man agrees. A young man repeats to another man that his younger brother had died. Two young men and two young women discuss how a young man had died after being taken into the sea on a current, despite the young man's training as a lifeguard. A woman tells a young man (her son) and her young daughter that she had a patient that had been suicidal but she had talked him out of killing himself and that he is still alive, many years later. It is implied that an older woman died and we see her family going to her funeral. A young man dramatically tells a woman (who had raised the young man as her son) that he will "switch his kippa for a suicide bomb." A woman tells her husband that she had been worried when giving birth that a missile could hit the hospital where she was. We hear a man describe how a hospital had been evacuated when a missile hit a hospital. A woman tells a young man (raised as her son) that on the night of his birth a missile hit the hospital and two newborns had been switched. A young man dramatically asks another young man if he had died how he would have been buried. A young man and two young women discuss how seeing people kill each other on television is different than having to kill a man in real life. Two men have a heated conversation about the Palestinian/Israeli conflict. Two young men joke that people sunbathing are "getting skin cancer."
► Throughout the movie we see armed guards and large walls with barbed wire at a checkpoint.
► We see a young man place a small clear container of what is implied to be urine on a man's desk and it is implied that the young man is going to be taking a drug test. A young man spits on the ground as he smokes a cigar.

MESSAGE - The Palestinian-Israeli conflict is very difficult and implacable problem. 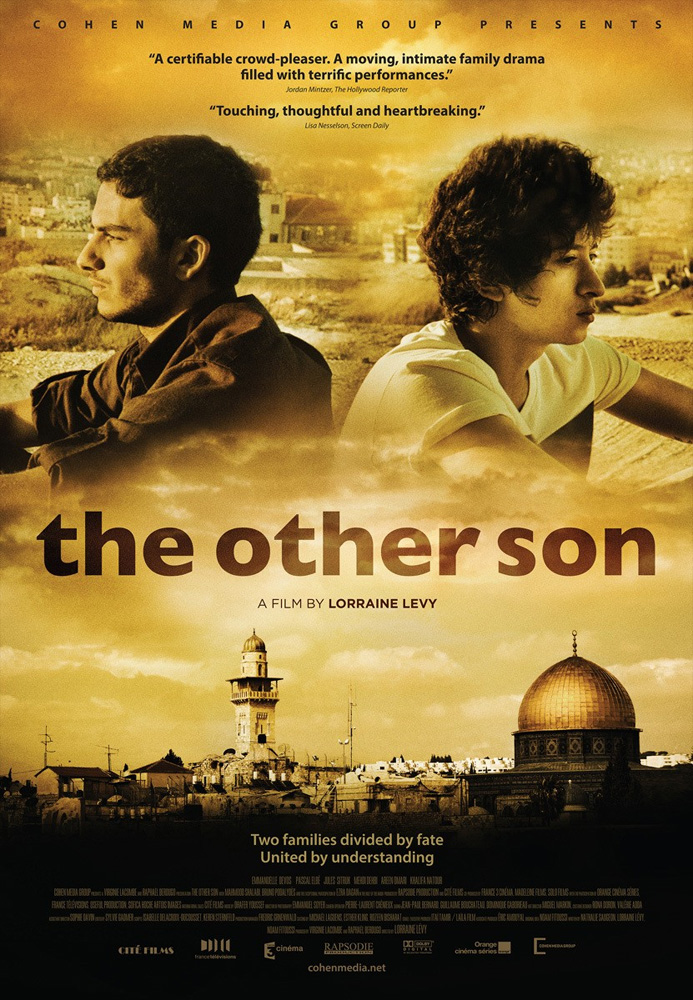