A man and a woman (Blanchard Ryan and Daniel Travis) are desperate for a relaxing vacation, and decide to participate in a day of scuba diving in deep sea waters, enjoying the underwater fauna, which includes sharks and eels. However, when they re-surface they realize they have been left behind by the tour boat. For the rest of the day and through the night they try to remain calm, while fighting seasickness, leg cramps, dehydration, jellyfish stings and sharks. Ostensibly based on true events. Also with Saul Stein, Estelle Lau and Jon-Damon Charles. Directed by Chris Kentis. [1:19]

SEX/NUDITY 6 - A woman lies fully nude (we see bare breasts, buttocks and her pubic region) in bed, a nude man (we see bare chest and buttocks) climbs into bed with her, they kiss and hug and talk about not feeling like having sex. People on a boat dance together and people dance at a restaurant. A drinking mug is shaped like a breast with the nipple as the drinking spout (it's called "little sipper"). We see people on a beach in swimsuits (men with bare chests and women in bikinis).

VIOLENCE/GORE 7 - A man floats in the ocean, we see his body bob under the water a few times and it then submerges and does not come back up (he is taken away by a shark). A shark bumps into a man and a woman, the man drops his knife, the shark tugs on the man pulling him under water, he yells and says that he has been bitten (we see a chunk of his leg missing and the water around them becomes tinged red. We see a bloody dead shark on a fishing boat, its fins are cut off, its abdomen is cut open, we see intestines spill out, and a man pulls the contents of its stomach out (including a camera). In several scenes, many sharks circle and splash near two people floating in the ocean -- the people panic and are very frightened. Many, many sharks circle a woman floating in the ocean. A woman sleeps while floating in the ocean, a shark bumps into her waking her up, and she panics when the man she was with is nowhere in sight. A man awakens while floating in the ocean and panics when the woman he was with is not with him. We see small gashes on a woman's leg, and a bit of tissue and blood floats in the water. A woman yells after having been stung by a jellyfish, then the man with her yells when he is also stung. Lightning flashes as a storm moves in, a man and a woman float in pitch-black water and panic when they hear splashing around them, but cannot see anything; a shark rubs against the woman's leg, the man screams (he is bitten by a shark) and we see him floating unconscious. A shark swims very close to a man and a woman in the ocean and the man pulls out his knife. A man and a woman argue. A man and a woman scream and cry (on separate occasions) in frustration and terror when they realize they have been left behind in the middle of the ocean. A woman submerges herself and does not come back up. Birds circle over a man and a woman floating in the ocean. We see people scuba diving and investigating sharks and eels. A woman is nauseated from seasickness and dehydration. A man talks about the marine life that divers would be seeing underwater, including moray eels, stingrays and sharks. A man kills a bug on a wall with a rolled up magazine. A statue of a shark hangs by its tail and a man puts his head in its mouth. A woman vomits in water (we see goo floating). We hear that people have urinated in the water.

MESSAGE - The chances of survival in the open ocean are very slim. Few things are as terrifying as being abandoned in the sea. 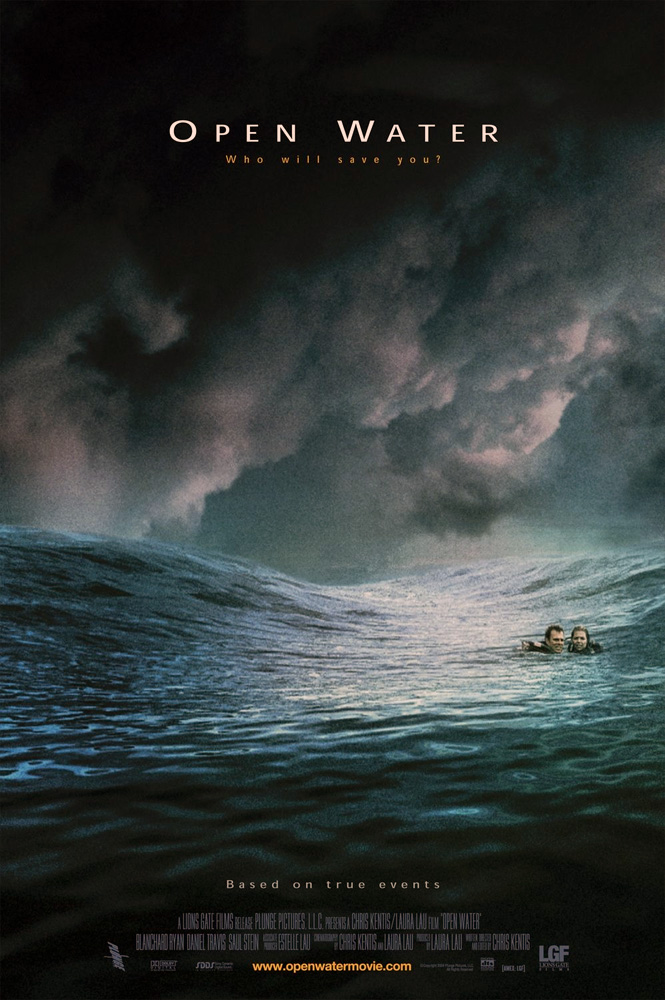