A young woman (Shannyn Sossamon), traumatized by witnessing the deaths of two friends due to what seems like freak accidents, becomes convinced that their deaths are linked to strange phone calls they each received that recorded the last moment of their lives. Also with Edward Burns, Ana Claudia Talancon, Ray Wise, Azura Skye, Johnny Lewis, Jason Beghe, Margaret Cho and Meagan Good. Directed by Eric Valette. [1:27]

VIOLENCE/GORE 7 - A young woman falls off a train overpass and is struck by a speeding train (we see her body thrown in the air) and we see her remains on the ground with blood on her face and a severed hand (with a bit of blood at the separation) that is dialing a cell phone.
► A man performs an exorcism on a young woman: the power goes out, lightning flashes, icons begin moving, we see figures approaching the young woman, she stands up and flinches, gags and we see something moving inside her throat (it looks like fingers), she gasps and falls dead on a table (we see her bloodshot eyes).
► A young man is struck through the back by a steel rod thrown from a construction site after an explosion -- he gasps, we hear a crunching noise, we see a bit of blood at the exit point and he slumps to the ground.
► A man unzips a body bag in a morgue and we see the decayed skin and face of the body of a young woman; he reaches into her mouth and pulls out a hard candy (we hear some squishing).
► A young woman walks through an abandoned and burned out hospital, she hears voices, something seems to move behind her, she pulls a curtain open, opens a door and finds a baby in a crib (it looks dead, with ashen skin); she screams and runs, she is trapped by a locked door, steps in a pile of wriggling millipedes, falls, and she is dragged by something that's behind her and she sees a woman with an ashen face, who looks dead.
► A young woman crawls through a dark passageway, she finds a body that's severely burned, with distorted features and bloody skin, and the body crawls toward her; she struggles to get away, the body climbs on top of her, and she pushes it off her and she is unharmed.
► A man goes to a door after hearing loud knocking, puts his eye to the peep hole and is stabbed through the eye (we hear the metal blade and the man falls to the floor dead).
► A woman smokes and blows the smoke into the face of a girl, and speaks to her in a threatening tone; she then moves the burning cigarette toward the girl and we hear a sizzle, and the child cowers in a corner.
► A girl has an asthma attack; she gasps for breath, she uses her inhaler, continues to gasp for air, she falls to the floor and dies (we see her taking her last breath, with her eyes open wide and mouth open).
► The windows of a house shatter and blow glass onto a young woman inside: the door blows open, an ashen figure moves toward the young woman, another figure grabs the first one and pulls, we hear screeching and the figures disappear.
► A young woman leans over a fish pond, a hand reaches out of the water, grabs her by the face and pulls her into the water (she does not re-surface); then the same hand grabs a cat sitting nearby (it does not re-surface either).
► A young girl walks toward an attic door, peers through a hole in the door and sees her father hanging (we see his feet swinging).
► A girl holds another girl's hand and cuts her with a butcher knife (we hear a slice but do not see it).
► A hand reaches through a door and grabs a young woman by the hair, she screams and pulls away. A man is thrown hard against a wall and is knocked unconscious.
► We hear a heart beating and frantic breathing and footsteps, and then see a girl's face in a window; she screams, windows blow out and the building bursts into flames; we then see injured people (with smoke stained skin) being escorted out by emergency teams.
► We see people who appear to have ashen faces and distorted features in several scenes, and one man has cracks in his face that ooze blood.
► A young woman sees what looks like a dead woman (with ashen skin) standing behind a girl in a window. A young woman sees a young woman with a large cut on her face. We see morgue photos of dead bodies (some have bloody wounds). A young woman has burn scars on her arms from where her mother burned her with cigarettes.
► A young woman hears a noise in a closet, she opens the door and a doll falls down from a shelf (she screams). A young woman hears a noise in her house, she goes to investigate, and she sees a figure moving in a dark room. A young woman appears fearful and apprehensive when she walks toward a door.
► A young man is nearly struck by a car.
► A young woman sees a woman being encircled in blowing leaves and then disappearing. A young woman hears a phone message of her own voice screaming. People hear phone messages that contain their final moments and we hear screaming in a couple of them.
► We hear that a young woman died from a fall while rock climbing and that she had been dead for over a week before being found. A man talks about his son having been possessed by a demon and that an exorcism saved him.
► A man and a young woman walk through an abandoned apartment; rotting food sits on a table, and a rat crawls out of a sink where dishes are piled up. A young woman sees millipedes crawling on the hand and under the skin of another young woman. A young man sees millipedes crawling into cracks in a pillar behind another young woman. We see a large millipede wriggling in a jar in a few scenes.
► A young woman stomps on her telephone breaking it. A young woman yells at a girl who will not speak.

MESSAGE - Don't answer the phone if you suspect that the call is from a dead person. 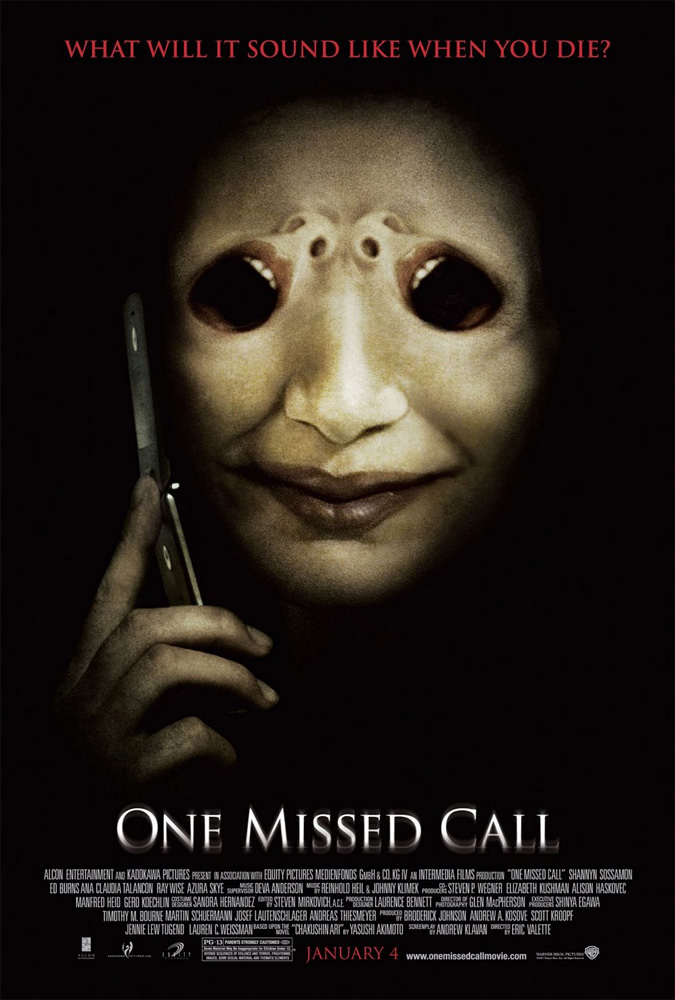