An avid rock climber (James Franco) falls and becomes trapped by a large rock that pins his arm. Nobody knows where he is, and after numerous attempts over 5 days to free himself by chiseling the rock, he resorts to extreme measures and cuts off his own forearm. Based on true events related by Aron Ralston in his memoir "Between a Rock and a Hard Place." Also with Amber Tamblyn, Kate Mara, Clemence Poesy, Kate Burton, Treat Williams and Lizzy Caplan. Directed by Danny Boyle. [1:33]

SEX/NUDITY 4 - A man imagines or remembers a woman caressing his chest (we see his bare chest) and moving her hand under covers toward his genitals (sex is implied). A man imagines or remembers many men and women in a car removing their clothing (we see bare shoulders and backs).
► A man is shown with a towel wrapped around his waist (his bare abdomen to the hip, chest and back are visible). A woman is shown taking off her top while swimming (we see her wearing a sports bra that reveals her bare abdomen). Women are shown wearing low-cut tops that reveal cleavage in a party scene. We see men and women wearing swimwear around a pool.
► A woman makes a remark into a video camera about testing a man's theory that an activity is more fun with your clothes off, and kisses the camera lens (it is implied that she undresses but no nudity is shown).
► A woman teases another woman and says, "You liked him" about a man. Two women invite a man to a party. A man says to two women, "This is the best fun you can have with your clothes on."

VIOLENCE/GORE 8 - A man uses a dull utility tool knife to cut at the skin on his trapped arm: we see blood at the cut, his hands become very bloody, he puts the knife in his mouth a few times to hold it and transfers blood to his face, he then uses his fingers to pull the flesh apart, touches what appears to be a nerve a couple of times and yells from the pain, cuts the nerve and yells again (we hear ripping and tearing, and we see blood and sticky strands as he works on the arm), and continues to saw and poke and tear at his arm until it separates. A man presses against his arm, which is trapped by a large rock, grunts and groans and we hear a very loud crack as he breaks the bone in the arm.
► We hear a man's heartbeat, he grabs his chest, then drives a utility tool knife into his arm (we see the tool sticking out of his arm and blood oozes from the wound), pushes the tool into the opening and we see an internal shot as he says, "Bone"; he removes the tool, pokes his finger in the bloody hole it created and then licks the blood from his finger.
► A man falls over a large rock that has broken loose and follows him down a narrow space between two rock walls; his arm is pinned between the rock and the wall when they reach the bottom (we see blood and tissue smeared on the rock wall). A man slips and falls, pulling against his arm, which is pinned by a large rock; we hear a loud pop and understand that a bone has broken.
► A man pokes his thumb (it has turned a gray-blue color) with a pocketknife and talks about it being "gone" and not having any circulation for a period of time. A man twists a tourniquet very tightly on his arm and moves a dull utility tool blade across his flesh (it does not break the skin). A man takes a photograph of his severed arm that's pinned between a rock and a rock wall (his finger sticks to the button from the drying blood covering his finger).
► A man wakes up with two ants biting his face (he's OK). A man puts what looks like a sack over his head, he coughs and thrashes and falls to the ground unconscious (he wakes up OK later).
► A man is shown in several scenes trying to free himself from a large rock that pinned his arm: he rigs a pulley, he chips away at the rock with a small utility tool, and he pounds on the large rock with a smaller rock.
► A man trapped in a deep hole drops a utility tool he is using to try to chip away at the rock that has pinned his arm against a wall; he cannot reach it. A man yells and screams for help on several occasions and we see that his cries do not carry very far beyond the deep hole he has fallen into.
► A man imagines a huge rainstorm moving through and water filling the hole he is trapped in (we see him sink under water as he struggles to free himself from the rock that has pinned him) and the water washes the rock away and he is freed. A man imagines himself being pulled out of a hole where he is trapped.
► A man and two women squeeze through a narrow rock formation, propping themselves between the two rock walls above a deep crevice; the man lets himself fall through the narrow crevice (the women scream in fear, thinking it was not on purpose) and drops into a body of water below; the women follow one at a time and then they all do the same thing several more times (no one is harmed).
► A man drinks his own urine from a hydration bag and he gags. A man urinates into a hydration bag (we see the urine filling the bag) and he smells the urine and gags. A man urinates on the ground (we hear the trickle). A man sticks his finger in his eye, takes out a contact lens and puts it in his mouth (he does this in a few scenes) and we see him putting the lens in his eye in another scene.
► We see a man with a healed stump below the elbow. We see inside a man's mouth as he drinks from his water bottle and sticks his tongue inside to get every drop. A man collapses into a small pool of water and he drinks and pours it on himself. A man wraps himself with ropes, and other items he has with him to try to keep warm.
► A man bikes on a rough, rocky path and falls down an incline (he lands hard on the ground and moans but is OK). A man drives a car on an unpaved road and we see him bouncing around in the driver's seat.
► A man imagines going to the door of someone we understand was a girlfriend and she closes the door on him as he explains that he was trapped and injured.
► A man talks to himself and says, "Don't lose it." A man talks about having urinated and that he almost urinated in his pants.
► A trapped man seems nervous, thinks he hears something coming from a dark area and imagines seeing a large inflatable dog.

SUBSTANCE USE - We see people drinking alcohol at a party and a man imagines being there, and we see a partially empty bottle of wine and it is implied that a man and a woman have been drinking it. We hear lyrics to a song that contains references to a "chemical in our brains" that makes us different from animals. 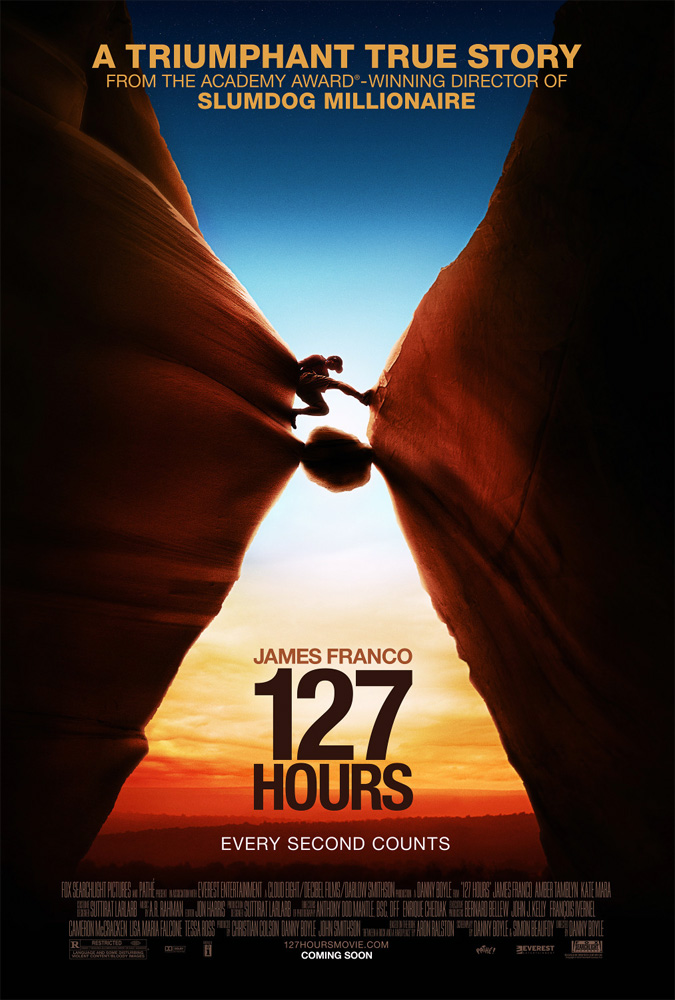