Why is “No Time to Die” rated PG-13? The MPAA rating has been assigned for “sequences of violence and action, some disturbing images, brief strong language and some suggestive material.” The Kids-In-Mind.com evaluation includes a couple of implied sex scenes and partial nudity, a few kissing scenes, many scenes of gunplay with many people shot and killed with little blood shown, many car chases with vehicles crashing and flipping killing the occupants with some blood shown, many missiles launched into an island causing many explosions, many people dying from poisoning with bloody boils on their faces and necks, a child being threatened in a few scenes, and at least 1 F-word and some strong language. Read our parents’ guide below for details on sexual content, violence & strong language. James Bond (Daniel Craig) is pulled back into the fray and out of retirement after he is told that a project he thought was defunct is still underway and has fallen into the hands of a diabolical man (Rami Malek) who seeks revenge against the woman (Léa Seydoux) 007 currently loves. Also with Ana de Armas, Lashana Lynch, Ralph Fiennes, Christoph Waltz, Ben Whishaw, Naomie Harris, Jeffrey Wright, Billy Magnussen, David Dencik and Rory Kinnear. Directed by Cary Joji Fukunaga. Several lines of dialogue are spoken in French with English subtitles. [Running Time: 2:43]

No Time to Die SEX/NUDITY 4

– A man and woman kiss passionately in a hotel room, they press against a wall while kissing and the man removes his shirt and we then see the woman lying on top of the man in bed and covered with sheets (his partial bare chest is seen and sex is implied). A man and a woman lie in bed together asleep and we see his bare shoulder and partial chest (sex is implied).
► A man and a woman kiss passionately. A man and a woman kiss tenderly. A man and woman hug goodbye.
► People at a party are shown dancing and several men sit in sofas with several women seated near and around them, and some appear to be kissing and caressing the men. A woman unfastens a man’s shirt to reveal his bare chest and hands him a tuxedo to change into; he misunderstands her intentions and she corrects him. A woman on a moped offers a man a ride and when he gets on she pulls his arms around her while telling him to hold on. People dance in a nightclub scene and several women are shown wearing skimpy outfits that reveal cleavage and bare abdomens. A woman tells a man, “She’s not yours,” when he meets her young daughter for the first time.
► A nude woman lies in a bed ad we see her bare shoulders, back and partial upper buttock (a sheet covers the rest of her). A woman wears a deeply cut dress that reveals cleavage to the upper abdomen, bare shoulders and her full back, as well as her legs with garters at the upper thighs. A woman wears a low-cut dress that reveals cleavage. A shirtless man wearing swim trunks (bare chest, abdomen and legs are seen) stands on rocks near an ocean and speaks to a woman wearing a swimsuit (we see her shoulders and cleavage) in the water. A woman wears a long T-shirt and we see her bare shoulders and legs to the upper thighs. A woman’s dress is low-cut and reveals cleavage. A man showers in an outdoor shower and we see his bare chest, abdomen, hips and back. A woman wears a top that reveals bare shoulders, cleavage and bare abdomen. A woman’s dress reveals her legs to the hips while she fights several men with high kicks and flips. The opening credits show a woman’s bare abdomen and bellybutton in close-up.

No Time to Die VIOLENCE/GORE 7


No Time to Die LANGUAGE 5

No Time to Die SUBSTANCE USE

– A woman takes medication (indicated for depression) with a glass of wine, and a man and a woman are injected in the neck with a hypodermic needle (containing trackers). People drink in a club scene, people drink at a party, a man orders two martinis at a bar and a woman drinks hers straight down, a man orders and drinks a scotch in a club, a man pours a glass of wine, a man pours and drinks two glasses of alcohol, and a man and a woman each drink a shot of a clear liquor. A woman smokes a cigarette, and a man finds ash from a cigar and a cigar butt in his home.

No Time to Die DISCUSSION TOPICS

No Time to Die MESSAGE

– Life is all about leaving something behind. 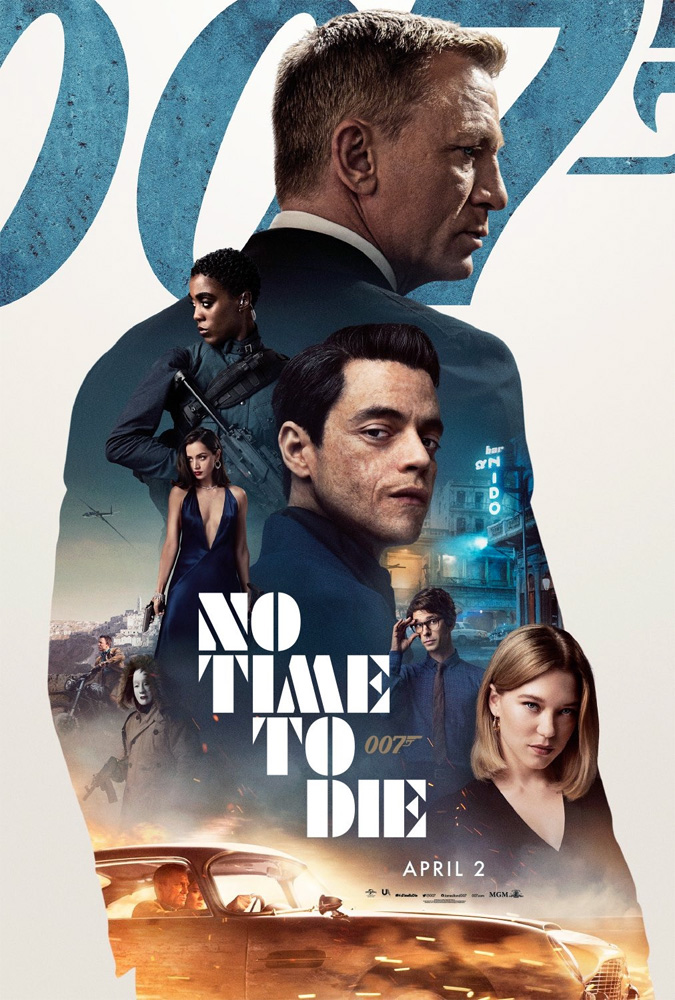