A once brilliant director (Daniel Day-Lewis) is preparing for his newest film, which he hopes will re-ignite his career. Unable to sleep, write or think, he's doubting himself, while also having to juggle life with both his mistress (Penelope Cruz) and his wife (Marion Cotillard). Also with Nicole Kidman, Judi Dench, Stacy 'Fergie' Ferguson, Kate Hudson, Sophia Loren and Ricky Tognazzi. Directed by Rob Marshall. [1:58]

SEX/NUDITY 6 - A man listens on the telephone while a woman sings about him touching her and we hear that his heart rate is racing (he's being examined by a doctor at the time); we also see her caressing her inner thighs as she dances seductively and strikes suggestive poses (she is wearing a corset and fishnet stockings and we see cleavage).
► A man lying on top of a woman in bed (presumably in the middle of sex) has a panic attack and breathes heavily, moves off the woman and begins to dress (we see his bare chest and the top of his underwear and she is wearing revealing lingerie that reveal cleavage, shoulders and thighs).
► A woman sings while doing a striptease: men in the audience watch and cat call, she removes a necklace and gloves, we see her standing on stage with a bra top, stockings, garter and panties, several men pull on her arms, shove her back and forth across the stage, one man kisses her on the shoulder, and her top opens and reveals the side of her bare breast.
► A woman is shown wrapped in a sheet (bare shoulders are visible) and she talks to a man sitting in bed (he's clothed); he directs her to leave the room and come back, pretending to be in the wrong room. A man watches his ex-wife with another man.
► A man and a woman in a bar flirt, the woman leaves and puts her room key in the man's pocket, the man goes to her room to find her undressing (we see her reflection in a mirror and she is wearing bra and panties and is removing her garter and stockings), the man watches her, and then leaves (nothing else happens).
► During a dance number, many scantily clad women (they wear corsets and garters that reveal cleavage, bare shoulders, bare backs, legs to the hip, stockings and garter belts) dance on a stage using suggestive gestures; a man caresses one woman's clothed buttock, they lie on the stage and kiss, and several other women lift the man in the air and parade with him. A dance number shows scantily clad women dancing seductively while singing about a man. A dance number shows scantily clad dancers (bare abdomens, cleavage and legs) dancing and gesturing on stage and at one point they lean over away from the audience to reveal their barely covered buttocks.
► Several young boys call to a woman in a small shack on a beach, they give her a handful of coins, and then watch her dance seductively while singing about how to make a woman happy -- she is wearing a low-cut dress that reveals cleavage, her thighs are revealed when the scene cuts to a stage where there are several other dancers dressed similarly dancing with her, she lowers a shoulder of her dress and she sings, "Be Italian, be a lover."
► A woman wears a low-cut dress that reveals cleavage. A woman crosses her legs, her short skirt creeps up to reveal her stocking tops and bare thigh and a man looks at her with interest. Two men sit in a steaming hot tub together (one is bare-chested) and talk. A woman wearing a low-cut dress with a sheer skirt that reveals cleavage, bare shoulders and back walks toward a man, leans over and kisses him. A woman wearing lingerie sits in a bed and tells a man who is leaving abruptly, "I'll be waiting with my legs open."
► A man removes a crucifix from a wall when he and his mistress are about to have sex, the woman opens the sheet that is wrapped around her (we see her bare shoulders and back) and walks toward the man waiting for her in bed and they kiss (sex is implied).
► A husband and his wife dance and kiss. A husband and his wife lie in bed, he kisses her neck, and they kiss and hold each other.
► A woman tells a man that she had a nightmare where she and the man were lying naked and a man kills them with a shovel. A man tells a woman, "I am less interested in the wrapping than what's inside it" when asked his views on fashion. A man says, "I never make love to my leading lady." References are made to filth and debauchery. A woman talks about the "sexual revolution." A cardinal tells a movie director that he and everyone in the church love his films, but that they must publicly condemn them because of their content. People talk about what it means to be a good Catholic and Italian wife (e.g. to turn a blind eye to a husband's infidelity, to be obedient, etc.). A woman sings to a man that she is in love with him.
► A man puts lipstick on and kisses a photo of a woman (as an autograph). A man and woman sleep together in bed (they are clothed). A man places his head in a woman's lap and she caresses his hair.

VIOLENCE/GORE 3 - Two priests chase several boys, and one is caught and dragged to a church office where he is struck repeatedly on the back with a cane (we do not see the effect, but we hear the boy moan and we hear the thwacks).
► A wife confronts her husband about his infidelity and they argue. A man yells at a woman and makes her leave a restaurant. A man says, "You kill your script." A man asks, "Am I dying?" A man complains of not being able to breathe or think in several scenes. A woman talks abut the "death of religion." References are made to filth and debauchery.
► A man and a woman in a car are chased by a car and two motorcycles.
► We hear that a woman attempted suicide (we see her in bed after being treated by a doctor).
► In many scenes a man seems distraught from the pressure to succeed. A man imagines that his deceased mother is sitting next to him in a car and they talk. A doctor examines a man and determines that he is exhausted from stress.

MESSAGE - The pressure to succeed in the movie business can be overwhelmingly consuming. 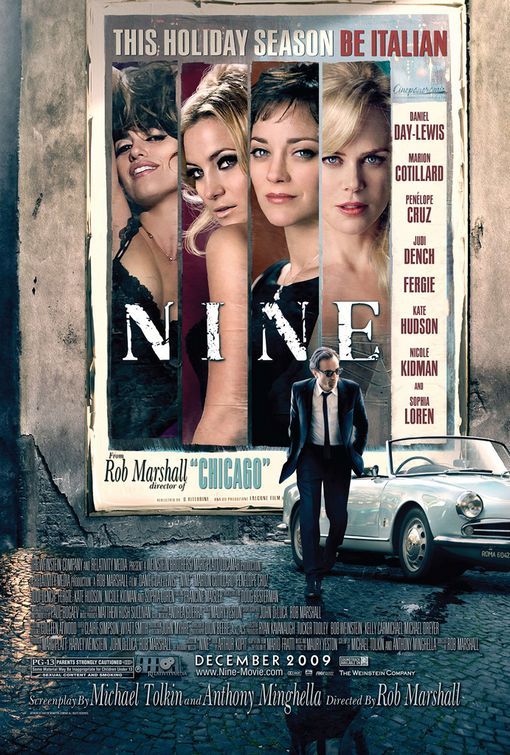