Based on the book "Courage Beyond the Game: The Freddie Steinmark Story" by Jim Dent: Set in the 1960s, a young man (Finn Wittrock) dreams of becoming a pro football player despite lacking in size but his father (Michael Reilly Burke) trains him hard enough to be noticed by a famous University of Texas Longhorns coach (Aaron Eckhart). Also with Sarah Bolger, Robin Tunney, Rett Terrell, Juston Street and Todd Allen. Directed by Angelo Pizzo. [1:58]

SEX/NUDITY 3 - A man and a woman roll in the grass while passing a football; she lies on top of him and kisses him briefly. A man and a woman lie together on a blanket during a picnic lunch and she kisses him briefly. A man and woman kiss briefly at a banquet. In two night scenes, a young man and a young woman sit on the hood of a car and kiss for several seconds; they hug in both scenes, and in the second scene, they kiss briefly twice more. A man and a woman in college hold hands as they walk across the grounds in three scenes.
► A football player runs to catch a ball, pulls down his sweat pants and we see his fully bared buttocks; as he falls into a roll, we see his bare legs from below the knees to the top of the thighs and see only a jock strap for underwear, with a bulge at the groin. Three cheerleaders wear skirts that end a few inches above the knee and they do back flips that briefly expose their bare legs from ankles to the tops of the thighs and the bottoms of their heavy uniform panties (we see the panties for a second all the way to the waist in front and back). Several young men appear shirtless in half-a-dozen scenes, revealing bare chests and abdomens as they run drills and lift weights. Two football players sit in deep whirlpool tubs with their shoulders, arms, and upper chests visible.
► A male high school student runs up and down a hill, shirtless and wearing knee shorts; he runs up to a car where two high school girls are sitting and asks one on a date and she stammers and accepts as the two girls giggle. A teen boy and a teen girl in a high school hallway stare at one another in interest as he walks past. A football player slaps another player on the buttocks with a hand in a couple of scenes.
► A teen girl tells another teen girl that all the girls have a crush on a boy and she giggles.

VIOLENCE/GORE 3 - A young man walks angrily into a group of placard carrying war protestors, grabs a sign, tears it up, and then he goes to his dorm room and cries briefly; when offered prayer, he tells his roommate, "Ask God to bring my brother back" and hits his desk loudly with his fist.
► A male college student learns that his older brother joined the US Army to be a helicopter pilot in Vietnam and becomes upset. We hear that a male college student learns that his brother was killed in action in the Vietnam war.
► A young man in a phone booth tells his father about a medical problem and he cries when he hears his mother's voice; the scene cuts to a doctor telling the player that he will have a biopsy and if the tumor is benign, the doctor will drain it, but if cancerous, he will amputate the young man's leg at the hip.
► Several football scenes feature young men training hard with physical contact, including tackling, body hitting, running while holding heavy weights, running with men on their backs, falling, grunting, sweating, panting, and some shouts of pain; during games, we see and hear over two dozen hard tackles with loud crunches and thuds (some of these are flying tackles) and one player goes to the whirlpools after a game with large red, raw scrapes over his chest, back, upper arms and face, along with large bruises on his shoulders and forearms. A college football player suffers a bone bruise around the thighs and knee of his leg and plays through the pain, limping slightly in one game; his limp becomes more pronounced as the season continues and he has two arguments with his girlfriend about his not seeing the team doctor and in one scene, he calls out, "Ouch" as he holds his knee at a picnic. An injured player rubs his knee while sitting on the bench, and in a close-up on the field, he grimaces markedly; we see him sitting in a doctor's office as the doctor places X-rays of the leg on a viewing box and they show a mass at the height of the knee and the doctor tells the player that he will need to have a biopsy at a cancer specialty hospital in another city.
► A football coach enters a classroom and speaks to his team, telling them that their star player had a biopsy that showed cancer on his femur in a tumor the size of a softball, necessitating amputation of his leg to the hip; the players look sad and one player rests his face on his fist and cries audibly as the camera cuts to the hospital room, where the player and his girlfriend discuss the future, cry, laugh, and then hug.
► A coach sees himself hung in effigy outside the athletic office after a game and his name is scrawled on a sheet of paper attached to the dummy. An assistant coach cracks the shoulder of a player loudly as the player bites on a towel and grunts loudly.
► A high school coach shouts, "Now we prepare for war!" A college coach announces to his team, "This season is going to be smash-mouth football." A man argues with football coaches over the phone, telling them that his son is gaining weight and can play football. A coach tells a recruit that the recruit runs fast, as if he has a squirrel in his pants. During a college championship game, a coach shouts very loudly and unintelligibly in two scenes as he waves his hands at someone off-screen.
► An angry player throws his helmet to the ground and the chinstrap falls off. A man with a full leg amputation argues mildly with his doctor about how quickly he can start physical therapy and we see the patient the next day hopping in hospital corridors and learning to walk on crutches with forearm cuffs, with the help of a friend. A doctor tells a patient after a leg amputation that individuals who have suffered the same bone cancer and lost a whole leg rarely live for more than a year afterwards. We hear that a famous college football player died from cancer in June, 1971. We hear that a man who was a star at football, baseball, and basketball injured one knee in a car crash so badly that he had to stop playing sports.
► During a football game, a coach tells the team they have been through a lot of heat, sweat, and vomit together (we see no vomit or gagging). At least 10 scenes show a man or two men chewing tobacco with a bulging cheek (please see the Substance Use category for more details); we see some of the tobacco in their mouths as they chew, and in one outdoor scene, one of these men bends below the frame and we hear him spit. A sign painted on a locker room wall in black letters says "No Spitting."
► A mother forces an 11-year-old boy to eat an adult-male portion of spaghetti, eight huge meatballs, and mounds of grated cheese in order to gain weight (the boy and both parents laugh).

SUBSTANCE USE - An IV line of saline solution runs to a man's arm in a hospital where two strips of tape hold it in place (we do not see the entry point into the skin). A large banquet features dozens of glasses of champagne on group tables and we see a waiter pouring champagne into a glass, a man at a table with his back to the camera picks up a glass of champagne and seems to drink it, a bar in the room features a man who drinks from a tall cocktail glass of dark amber liquid, tables at a banquet have glasses of wine at each place (no one drinks), and a male college student tells his friend he is going to have a few beers and exits the scene (we see no drinking). At least 10 scenes show one or two of three different men chewing tobacco with bulging cheeks (please see the Violence/Gore category for more details).

MESSAGE - One college football player became the inspiration of hope for thousands of cancer patients. 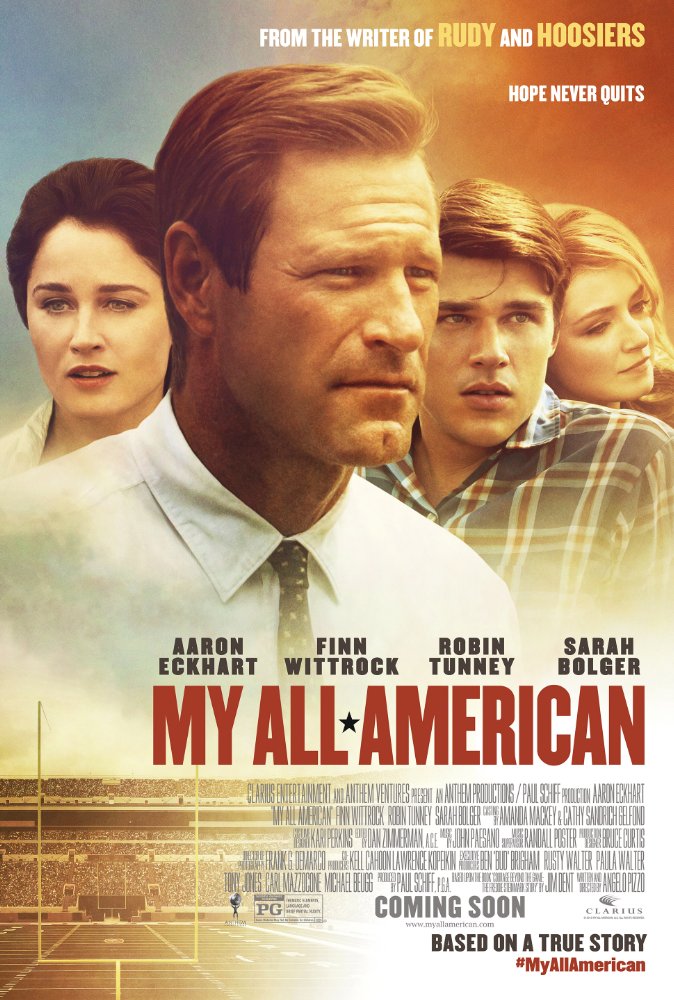