Why is “Mr. Harrigan’s Phone” rated PG-13? The MPAA rating has been assigned for “thematic material, some strong language, violent content and brief drug material.” The Kids-In-Mind.com evaluation includes partial non-sexual nudity, several bullying scenes including beatings and showing bloody results, discussions of drunk driving fatalities and flashbacks to the incidents, discussions of suicides, a teen falling to his death, and at least 2 F-words and other strong language. Read our parents’ guide below for details on sexual content, violence & strong language. A teenager (Jaeden Martell) works as a reader for an elderly billionaire (Donald Sutherland), who gives him a smartphone. When the old man dies, the teen puts the phone in the grave with him, and is astonished when he receives text messages seemingly from the dead man; he responds by leaving voicemail messages asking help in seeking revenge against a bully and a drunk driver. Also with Joe Tippet, Kirby Howell-Baptiste and Cyrus Arnold. Directed by John Lee Hancock. [Running Time: 1:44]

– A man hugs his wife briefly. A teen boy attends a dance with a female friend and we see many teen couples dancing closely to slow music.
► A dead man lies nude in a shower stall with a plastic curtain covering him from mid-chest to mid-thighs (please see the Violence/Gore category for more details).

– The film includes several scenes accompanied by eerie and ominous music, hard rain, and a storm with thunder and lightning. We see many instances of “red devil” lottery tickets with a red devil’s face.
► A drunk driver (please see the Substance Use category for more details) hits a couple in another car head on; the screen goes black as we hear loud twisting metal and breaking glass and we then see a car lying on its roof with two wheels spinning as smoke rises and we hear that the drunk driver was unhurt, but the woman in the other car died and her fiancé would be in the hospital for a long time. We hear that a man choked himself to death by drinking a bottle of shampoo and stuffing half a bar of soap down his throat; the scene cuts to the dead man lying in a running shower in a fetal position with open eyes (please see the Sex/Nudity category for more details). We see an oxygen tank in a corner of a room and a teen boy finds an elderly man motionless in a chair with an oxygen tube clipped into his nose; the boy shakes him, holds a mirror to his nose, sees no breath, and calls his father to help get an ambulance; the boy then sits and reads to the dead man while crying, and we see a short graveside service with a few mourners.
► A teen boy attacks a younger boy outside a school dance, shouting, punching him, slamming him into a wall, throwing him to the ground, kicking him, and standing on his neck until a teen girl runs out shouting and the scene cuts to a teacher cleaning blood off the boy’s bloody lip and bruised temple. A teen bully threatens a younger boy to shine his shoes or have the polish shoved down his throat; a teacher breaks up the situation. A teen boy steals a 9th grader’s cellphone and tosses it into the air.
► After an elderly man dies, a teen boy receives text messages, seemingly from the dead man, who was buried with a cellphone in his pocket; the teen goes to the cemetery, places his ear to the grave, and when he hears a phone ring, he shouts that they need bulldozers to dig up the grave because the man is alive. A teen boy calls a dead man’s cellphone, telling him about a teen bully who beat him and a drunk driver who killed a teacher in a car crash and he says that he wants the driver “dead.”
► We hear that a man held a woman by the throat and slapped her face back and forth many times until she collapsed. We hear that a woman died and her young son felt he was responsible for her death, although we do not hear the cause of it; we see the boy briefly, walking in a hospital corridor. We see or hear about several suicides. A newspaper headline announces “Another Suicide” at a business and we hear that several suicides happened among the employees there over the years. We hear that a man fired for theft at work drove his pickup truck into a garage, closed the door, and killed himself with carbon monoxide fumes. A teen boy reads depressing books to an elderly man whose sight is failing, including “They Shoot Horses Don’t They?” “The Jungle,” “Crime and Punishment,” and “Heart of Darkness,” and the man tells the boy, “Death is a gift” and “Dispatch your enemies with haste,” and not to regret it. We hear that a drunk driver killed himself in his shower. A teen boy asks a woman and a pastor about ghosts and both tell him that not all ghosts are holy. We hear that a man never married or had children, and had very few friends.
► We hear that a teen boy became drunk one night, climbed out his second story bedroom window, slipped, and hit the ground, breaking his neck (we see a body in a body bag being placed into an ambulance in front of a house). A teen boy thinks he’s responsible for a couple of people’s deaths, gets in his car, and pounds the steering wheel, as he shouts and cries. A teen boy sees a ring of dead flowers his mother once had in his bedroom. A teen boy sees his dead mother waving in the rearview mirror of his car as he drives away, looks back, and she is no longer there. A teen boy walks into an elderly man’s “secret room” and finds pictures of the man’s mother with a notation that she died when the man was very young. A teen boy goes to a graveyard, says goodbye to a man’s grave, cries over his mother’s grave and says, “I’m so sorry.”
► A flashback and a real time scene include a teen boy running through woods to a steep cliff above a river, where he stares at the water; the second scene continues with the boy throwing a cellphone into the water and a voiceover says, “When I die, when it’s my time to go, I want to be buried with empty pockets.”

– At least 2 F-words and its derivatives (1 spoken and one derivative painted on a garage door), 6 scatological terms, 5 anatomical terms, 2 mild obscenities, name-calling (crazy, stupid, idiot, creepy, boy, socialist claptrap, Short Bus), exclamations (darned), 9 religious exclamations (e.g. thank you God, Lord knows, 1 hymn, get behind me Satan, when the gods wish to punish us they answer our prayers, we were all going direct to Heaven). | profanity glossary |

– A teen boy hands a small baggie of something unknown to a younger boy and we hear that the baggie contained marijuana and that the older boy was expelled from school, and an elderly man says that iPhones and the internet make up a gateway drug that will lead to misinformation and confusion. We hear that a boy became drunk and fell off a roof and died, we hear that a drunk driver with four previous DUIs before killing a woman in a head-on car crash was sentenced only to a rehab center, and a flashback shows a drunk driver drinking from a bottle of whiskey as he drives into another car. A man smokes a cigarette outside a building and blows two large clouds of smoke.

– People may feel guilty for deaths and accidents for which they are not responsible. 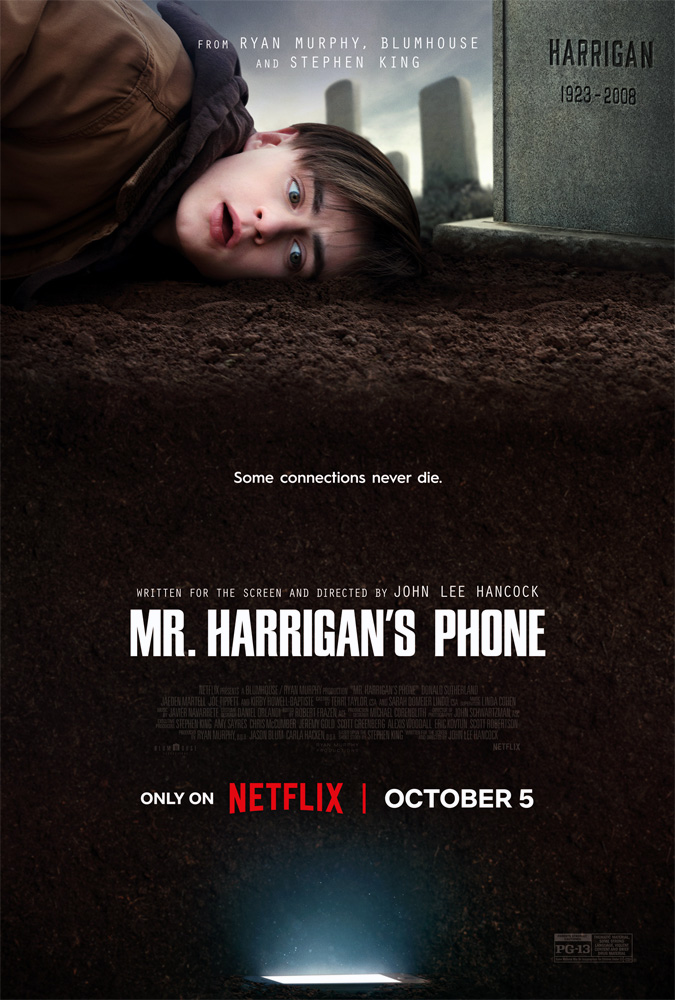