A day in the life of a harried Manhattan mother (Uma Thurman) who desperately tries to raise her two young children, as well as keep alive her dreams of doing something more with her life. Also with Anthony Edwards and Minnie Driver. Directed by Katherine Dieckmann. [1:30]

SEX/NUDITY 5 - A woman tells a few other women that while she was naked in her bathtub, she used her child's motorized submarine bath toy to pleasure herself; she jokes that the toy resembles a sex aid and one of the women divulges the story on her blog, referring to her friend "wanking off with her son's bath toy."
► A husband and his wife kiss passionately and embrace on the roof of their apartment building (sex is implied, but not seen). A husband kisses his wife's neck from behind, suggesting that they become intimate and she declines. A husband and his wife give each other a kiss. A husband and his wife sleep next to each other.
► A married woman invites a younger man to come into her apartment, they dance, jumping up and down, at times, bumping into each other, they flirt (the man tells the woman that she is pretty) and there is sexual tension. A woman and a man casually embrace; her top has a cutout, which briefly reveals the side of her torso.
► A man calls a woman the C-word. A pregnant woman says that all she wants to do is "shag" and also uses the expression "shag me mad." A woman refers to having "sympathy sex" and that her partner got her pregnant and left her. A woman tells her friend to get the "spousal unit to do you." During a fight, a woman yells, "Married women don't have a lot of sex either. You should know!" The advice "Don't breed" is given to a woman in reference to keeping one's sex life alive. Upon seeing a sexy dress in a clothing store, a woman makes a comment that buying it would imply chasing a new partner. A woman says a man would lose his scrotum if it weren't attached. A pregnant woman says that if she keeps eating, her baby will be so large it will be hard to push out vaginally and a friend jokingly chides her for saying the word "vaginally." A woman is told that the name she chose for her daughter (Clara) is an "Edna name," which is a "lesbian librarian" name. A wife tells her husband that a man looked at her like she might be someone worth looking at, and accuses him of never looking at her that way.
► Women in a clothing store try on clothes without going into a dressing room, and a woman's bra-covered breast is seen briefly. A woman's cleavage is seen when she wears a tank top, and another woman's cleavage is seen when she wears a nightgown, blouse, and dress in various scenes.

VIOLENCE/GORE 2 - A young child coughs, starts to choke, his face reddens, his father panics but finally performs the Heimlich maneuver, and a lollypop flies out of the child's mouth (which is referred to as a known choking hazard).
► A woman drives a car for a short distance without strapping her young child into his car seat, ignoring an onlooker's admonition and later the child starts to climb out of the car window while the car is parked, scaring the woman. A woman drives her car recklessly, talking on her cell phone and hanging up on her husband a number of times.
► A woman gets into a shouting match with a man at a store; name-calling ensues and a little girl reacts to the shouted obscenities by repeating them. A woman gets into a yelling match with a truck driver as they are stuck in gridlock due to the woman's refusal to move her car; the man calls her the C-word (we cannot hear the word due to traffic noise but we can clearly read his lips), the woman gets out of her car and asks him if he actually called her the "C-word" and they shout at each other. There are several scenes in which a mother yells at other people in front of her young child (she apologizes to the child for yelling). A woman has a fight with her friend over the content of her blog. A reference is made to filing for divorce and random hostility. A man is referred to as a pig. References are made to being fatuous, crazy, and nuts.
► At a playground, a woman tells another woman that her son almost crushed her child while he was going down the slide, the other woman accuses her of calling her son overweight. A young child wears a hooded white hazmat-type suit, due to his mother's concern for UV protection, and a comment is made that the child looks like a baby Klansman. An overzealous mother cries into her weeping child's face, as a way of "connecting in his moment of pain"; we hear crying from another room, indicating that a mother is using the pain connection technique repeatedly. A reference is made to stay-at-home moms having the possibility of becoming "mean, nasty, yelling mommies." In dialogue we hear, "sudden death for bad mommy." There are two brief references to 9/11, and a conversation about parents worrying and not being able to stave off disaster. A husband tells his wife to stop talking to him like he's impaired. A woman writes about not being able to throw out her child's teeth after pretending to be the tooth fairy and refers to a mom keeping her children's teeth as being like a "demented Nazi."
► After a dog squats, we see a large pile of feces on the sidewalk, a nearby pedestrian protests but the owner leaves the mess on the street; we see a woman scrape her shoe against the sidewalk in disgust.
► A woman tells a group of people that she is going to urinated into a pot and dump it on them and we later hear the sound of a bucket of liquid being dumped off-screen. A reference is made to a six-year-old's birthday party being good until someone starts bleeding. A pregnant woman, worried that she is eating too much, refers to the possibility that her baby could become a ten-pound behemoth. A reference is made to a dog having incontinence issues. A pregnant woman comments that she has to urinate every five seconds.

SUBSTANCE USE - A mother smokes cigarettes in several scenes, and at one point apologizes to her young son for smoking, the term "cigarette break" is used and a younger man offers a woman a cigarette, a woman refers to her young daughter as a "nicotine Nazi" because of all the "anti-smoking propaganda" she gets at school, a woman says "Everything in moderation" in reference to smoking, and a woman throws a cigarette butt on the ground. A woman refers to a group of moms at the park as "mothers who need to be medicated," and a reference is made to drinking gin and smoking reefer.

MESSAGE - The rigors of motherhood are best survived when a woman nurtures her own passions and interests. 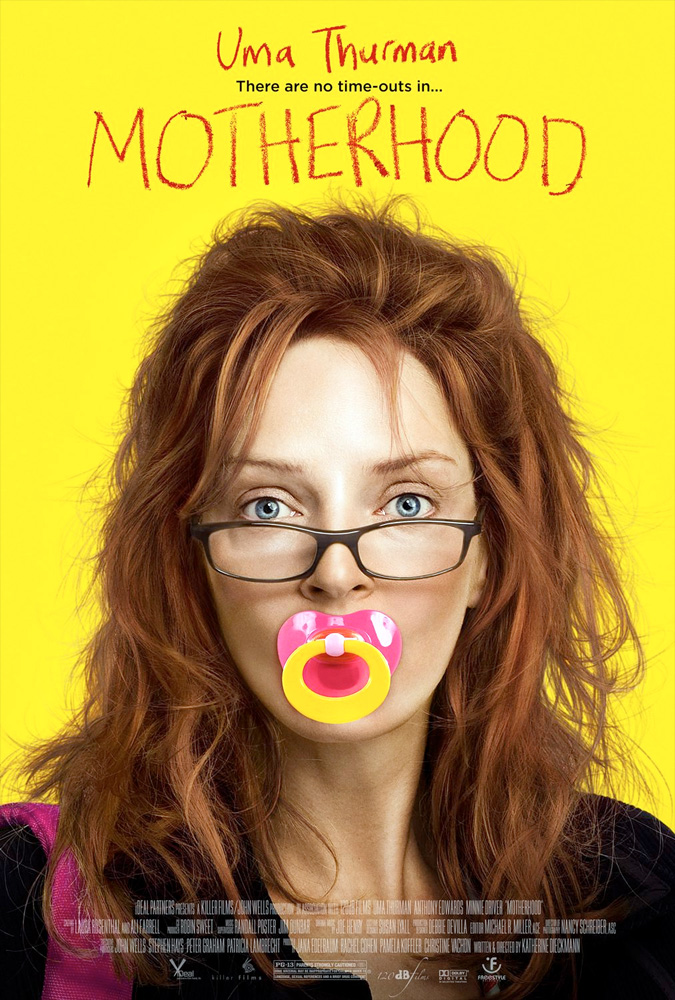