In this prequel to "Monsters, Inc.," the teen monsters attend their own university to train to become good monsters and have the chance to work on the Scare Floor. Freshmen Mike Wazowski (Billy Crystal), James Sullivan (John Goodman), Randall Boggs (Steve Buscemi) and Jeff Fungus (Frank Oz) hang out together on campus. Also with the voices of Sean Hayes, Dave Foley, Joel Murray, Bonnie Hunt, John Ratzenberger, Helen Mirren and Al Molina. Directed by Don Scanlon. [1:50]

SEX/NUDITY 1 - An older male monster's tentacle suckers accidentally become stuck to a lady monster's face and she blushes; later, we hear that the two are engaged, as we see them kiss briefly and the male monster says that he and the lady's adult son are brothers sharing a wife, but then he says in embarrassment that that's not correct, and that the two males are fraternity brothers.
► A girl monster bats her eyelashes at a male monster and invites his small fraternity group to a party as she drives away.
► An overweight female monster wears a long housecoat and bobs her behind up and down and side-to-side to music while she does laundry.

VIOLENCE/GORE 3 - Hundreds of various monsters attend a university program for scaring humans: Some monsters are very furry, while others are bald and reptilian and one monster is a green ball with 1 large eye while another looks like a blue bear with horns and back spines and another is a fuzzy arch with eyes and hands; several have long tentacles, others have multiple arms, some have bat wings, many have either two heads or three to five eyes (some glowing red), and some have eyes on stalks or antennae on their heads; a few have forked tongues or fangs and the dean of the college is a female lizard/insect with 100 legs that click along the floor; she also has large red bat wings and soars quickly through the air with loud flapping sounds and she scares all the students, who gasp; several monsters have yellow teeth and one humanoid girl monster has misshapen, crooked teeth in an overbite (a scaring Hall of Fame contains dozens of portraits of huge monsters with big teeth and fangs, glowing eyes, and horns).
► Two student monsters become trapped in a real children's dormitory at a summer camp at night; the monsters run through the woods to escape park rangers and sheriff's deputies that give chase in SUVs with flashing lights and on foot and one monster almost falls down a rock cliff wall, but the other pulls him up over the ledge; running back to the dorm cabin, the monsters climb into the rafters and trap a dozen inside; the monsters make the door slam shut, a phonograph begin to play, and a wind-up doll seems to walk and talk by itself and makes other noises; large claw slashes appear on the walls as rangers scream and shout until the monsters jump out and roar loudly enough that the doorway to the monster world explodes off its hinges.
► Several scenes feature scare simulators (children's bedrooms with sleeping child robots) and the Scare Floor where special doors lead to real children's bedrooms; various monsters enter bedrooms and attempt to scare the sleeper by creeping, scratching furniture with claws, making odd noises and finally jumping up and roaring; many robots and children scream loudly, but no one is ever hurt. Monster students spend much time practicing snarls, growls, roars and scary faces and then apply behaviors to final examinations and the campus Scare Games in a large, dark sewer room. In a few scenes, monsters argue and attempt to scare each other with roars and scary faces. In a half-dozen scenes in a lab and a classroom, scare canisters are filled with human screams; a few canisters over-fill, fly off like missiles and crash into walls, but no one is injured.
► At a monster fraternity party, another fraternity is slimed with neon-colored slimes, doused with glitter, covered with confetti and stuffed animals and belittled; pictures of them land in the next day's student newspaper and they are the laughing stock of the campus, causing their anger. Bullies repeatedly tell one short monster that he does not belong in college, but he stays. Rival fraternities and sororities insult one another and hiss, growl, and roar. An adult monster tells a student that on the Scare Floor, one could die from touching poisonous human children and that the year before a group of monsters was hospitalized for poisoning. A librarian, a 20-foot-tall slug with several tentacles, hisses at students to be quiet, chases them, and tosses several noisy ones out the roof's skylight into a creek, where they land unharmed. One night, campus guards shout and chase monsters away from the windows of the factory containing the Scare Floor.
► A two-headed pigeon pecks the ground and breathes a short burst of fire. A humanoid monster breathes fire onto a wooden gate in anger. A teacher tells a small child monster off-screen not to breathe fire, but we see a tiny flame in the corner of the frame.
► In a college cafeteria, a worker dumps a garbage barrel of chunky slime onto a salad bar and students devour it. A monster picks his teeth and fangs using a pencil.
► Two monsters fall off the back ends of treadmills. A monster falls over furniture in a dormitory room and crashes a large bookshelf loudly to the floor. Another monster throws a textbook hard into a wall and later runs over other monsters with a riding floor polisher, but no one is hurt. At a fraternity initiation in a dark basement, two monsters are swatted briefly with wooden paddles while standing and one of them grabs a paddle and breaks it in his hands.

SUBSTANCE USE - Adults rush to the aid of a teen monster in a scare simulation with big first aid kits marked with red Xs (no medicines are needed), monsters run an obstacle course through glowing poisonous sea urchins that were kept in a hazardous materials box, and spectators laugh as they throw poisonous urchins onto runners causing the runners to swell up from the toxins after they are stung.

MESSAGE - There is more than one way to achieve your dreams, and teamwork helps.

(Note: The film is preceded by a 6-minute animated short called "The Blue Umbrella": A blue umbrella meets a red umbrella in the rain and they fall in love; bad weather separates them and the blue umbrella is nearly hit by a car, smashes onto a truck windshield and lies battered in the street; the owner of the blue umbrella finds him with the help of the red umbrella's owner and the umbrellas are seen snuggling over their owners on a sidewalk café.) 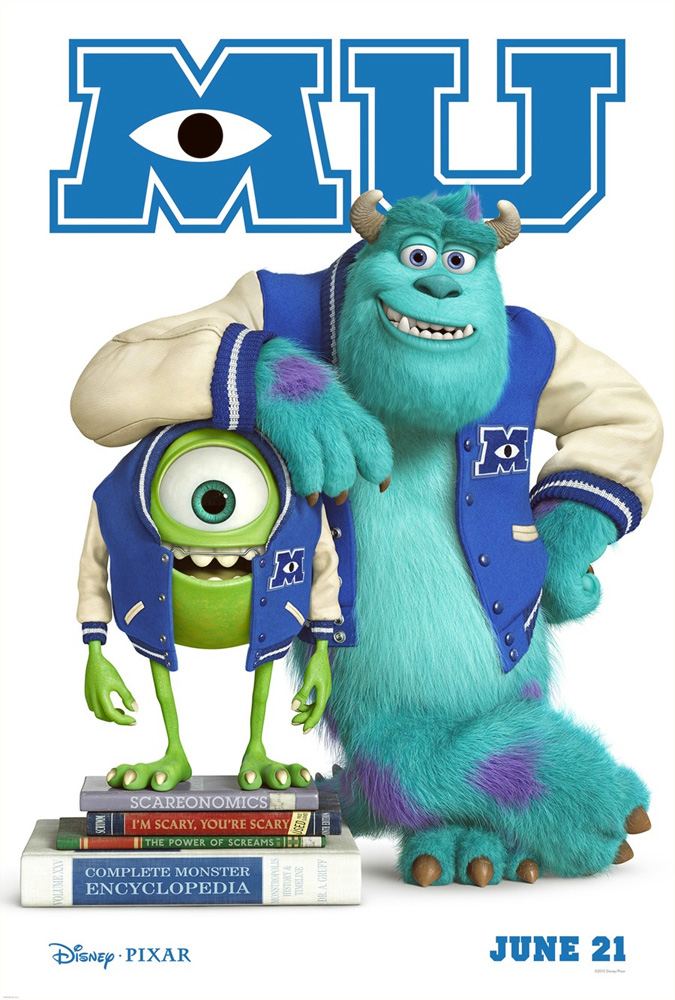