A young girl living in Texas with her family is seemingly perfectly healthy and happy until she begins to get sicker and sicker and no one can figure out what is wrong with her. Then her mother takes a bold step that she hopes will turn things around and save her daughter and her family. Also with John Carroll Lynch, Jennifer Garner, Kylie Rogers, Martin Henderson, Brighton Sharbino, Courtney Fansler, Queen Latifah and Eugenio Derbez. Directed by Patricia Riggen. [1:49]

SEX/NUDITY 2 - A man removes his shirt to change and we see his chest, abdomen and back. A man is shown with his shirt open (bare chest and part of his abdomen are shown) while on a stretcher in a hospital ER. A woman wears low-cut dresses and tops that reveal cleavage in a few scenes. A young girl is shown sleeping in the back seat of a car and we that her pants are unbuttoned and her abdomen is swollen. A little girl is shown wearing her underwear (like boy shorts) and a tank top while trying on clothing (we see that her abdomen is swollen). A doctor examines a young girl's abdomen and we see the swollen flesh to the top of her panty waistband.
► A husband and his wife hug and kiss. A husband and his wife lie in bed together clothed (she reveals cleavage).
► A husband and his wife kiss and she slaps his clothed buttock as she walks away.

VIOLENCE/GORE 4 - Two girls climb a tall tree and sit on a limb before it starts to crack and the older girls orders the younger one to sit in the hole of a tree; when the younger girl tries to get situated, the hole opens up and she falls a great distance to the ground inside the tree (we see her lying motionless with a bloody face).
► When EMS arrive at the scene of a young girl inside a hollow tree, one man says that the girl is, "unresponsive." EMS crews retrieve an unconscious young girl from inside a hollow tree and we see her hanging limp as she is being lifted in a harness (she has blood on her head and face).
► A young girl cries and thrashes in her bed from pain; she is sweating and appears to have a fever (she is rushed to the hospital). A young girl is shown sleeping in the back seat of a car and we that her pants are unbuttoned and her abdomen is swollen. A man is shown with his shirt open while on a stretcher in a hospital ER; he has an oxygen mask on and he is moaning. A young girl cries, thrashes and moans, and then asks her mother for more pain medicine (she does not give her any more).
► A doctor performs an endoscopy on a young girl by inserting a tube down her throat (she is sedated) and we see her throat and intestines on a screen in the procedure room. A nurse puts a tube down a young girl's nose and throat and the girl cries and pleads with her to stop. A woman pulls a tube out of her young daughter's nose and the girl complains that it hurts. A nurse draws blood from a young girl's arm and we see the needle press against her skin and the collection tube with red liquid in it. A young girls is shown in an MRI machine. We see a veterinarian performing surgery on a dog (the dog is covered with a surgical sheet and we see the doctor pressing a scalpel against its abdomen).
► A young girl vomits as she runs through a bathroom to the toilet (we see goo and hear her gagging and coughing), and we then see vomit on the floor before it is cleaned up. A young girl says that her vomit was green.
► A woman pounds on the roof of her car and kicks the door before it will open; a young girl and another woman ride in the car even though the passenger side seat belt is not operating. Three girls, a man and a woman have a pillow fight in a hospital room. A young girl sits inside a tractor tire and her older sister pushes her (no injuries).
► A husband and his wife argue in a few scenes (about money, faith and their daughter's illness). A young girl yells at her mother in frustration. A woman argues with her young daughter about needing a shower. We hear that a young girl died from cancer. A doctor tells the father and mother of a 10 year-old girl that their daughter has an abdominal obstruction and that if they do not operate immediately, their daughter will die. A doctor says that a young girl has an intestinal motility disorder and that that means that the body cannot process food; the girl's father asks if that means that they will have to feed her through a tube. A doctor says that a young girl has paralysis of the intestines and that she is in a lot of pain. A young girl tells her mother, "I wanna die." A woman says that her young daughter is in constant pain. A doctor tells a mother and father that their daughter has a slight concussion after a fall that could have killed her. A woman tells another woman, "Someone's sins are standing in the way of healing your daughter." A young girl says that someone said that "Hell is in California." A young girl asks, "Why hasn't God healed me?" A woman tells her young daughter, "I know God loves you." A woman looks up to the sky and says, "Do you hear me? Because I don't hear you." Two young girls talk about their illnesses; one has a stomach disease and the other has a bone disease. A young girl says, "I stepped out of my body."
► A young girl imagines being transported to a place where she feels safe and we see her imagining that she is walking on clouds and water.

SUBSTANCE USE - A woman lists a large number of drugs that her daughter must take to get through a day and she says that she is in constant pain, and a young girl cries and thrashes and moans as she asks her mother for more pain medicine (she does not give her any more). A woman says that she is trying to quit smoking.

MESSAGE - Miracles are everywhere and faith is the only true shelter. 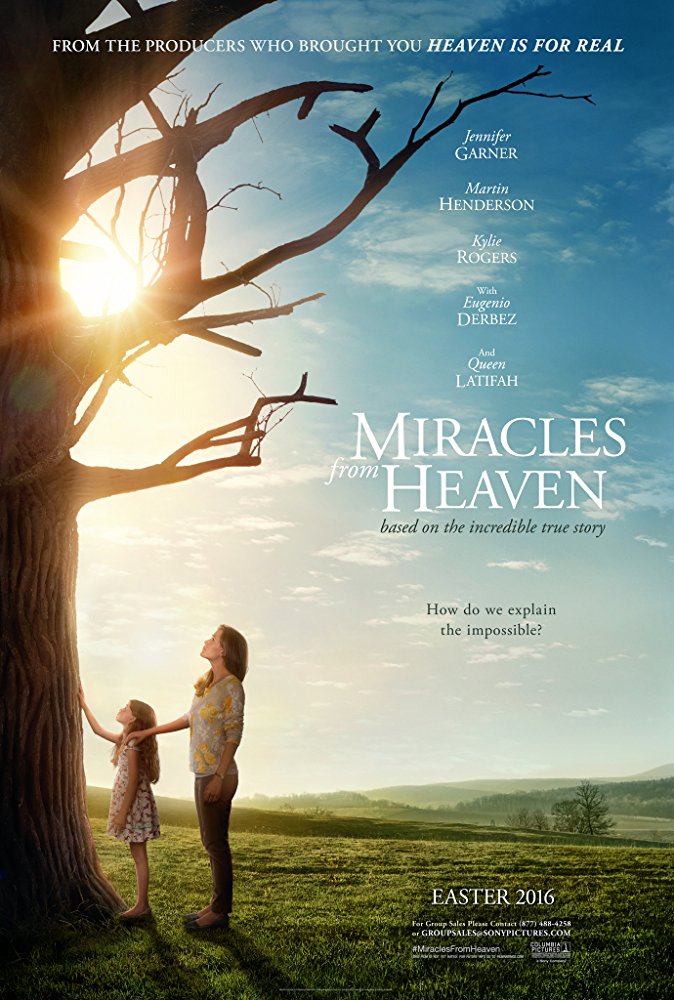