SEX/NUDITY 6 - Several women sit in a hot tub and their bare breasts and shoulders are visible above the water; men are also in the hot tub and we see bare shoulders, chests and backs. A man opens his shirt to reveal his tattooed bare chest to another man.
► A nude man walks onto a crowded courtyard (we see his bare chest, back, legs and buttocks). Two men wearing hospital gowns that are open in the back walk through a compound (we see bare backs, buttocks and legs). We see a man's bare buttocks and bare legs to the hip while he apparently holds a bag of sand hanging from his scrotum.
► A man yells at his young son and says, "Stop being so queer." A man accuses another man of "procuring prostitutes." A man reads a piece of propaganda that reads, "Your wives are at home having sex with Bart Simpson and Burt Reynolds."

VIOLENCE/GORE 5 - A soldier is shot and falls back onto the ground (no blood is shown), and another soldier is shot in the chest (we see a large bloody spot form on his shirt) and he falls back on the ground. Two groups of armed security personnel open fire on each other (one man is shot in the leg and has a bloody wound).
► A man is given LSD, he panics and throws things around a room, he walks onto a crowded courtyard and begins shooting at people (no one is struck), and he puts the gun to his head and we hear a gunshot (we do not see it) and we hear that the man died.
► Many armed soldiers shoot at a man running in the distance (he is not struck). A car drives over an explosive, after the explosion the car flips over, and the two men inside the car are fine although one is temporarily unconscious.
► A man falls face first onto his desk; we hear that he died of a massive coronary and later see the imprint of his head and nose in the desktop.
► Two men in a truck accidentally strike another man, who's running along the road (the man rolls on the ground and moans and we see him with a bloody cut on his forehead).
► A man holding what looks like a harmless piece of plastic uses it to show another man how many ways it can be used as a weapon (the man moans and yells and complains with each demonstration). A man tells another man to choke him, he protests but gives in and lunges toward him, but he's thrown him to the ground (he moans but we see no injuries).
► A man runs full boar toward a wall, slams into it, falls back onto the floor and moans. A man jumps off a roof, lands hard on the ground and moans (he misses a stack of mattresses that he was supposed to land on). A man falls out of a helicopter and lands on the ground (he's OK but has a mud covered face). A car crashes into a boulder, the driver air bag deploys and the passenger slams his head into the dashboard (we see him with a bloody nose later). A blindfolded man drives a jeep and nearly hits several other men that are watching him. A man walks through hot coals (he yells and seems to be in pain; we see no injuries).
► Two men are bound and held at gunpoint, another man is blindfolded; the men with guns begin to fire and the captives run and hide. A man holds a gun on another man, puts it in his own mouth, then lowers it and runs away. Three men are held at gunpoint. A man holds a gun on another man. A man jumps on another man and takes his gun away.
► A man stares at a goat, the man twitches, the goat falls over on its side and is presumed dead. A man pokes another man in the forehead; the man stumbles, falls to the ground and talks about this being the death touch that caused the cancer that is going to kill him.
► We see a bag of sand hanging from between a man's legs and we are told that it is hanging from a chain and hooks attached to the man's scrotum. We see a video of a hamster collapsing in a cage (it gets back up shortly thereafter). We see a military hospital with wounded men; one is in a wheelchair missing his leg from the knee down, and another has a bandage on his head.
► We see a man huddled and moaning in a cell where bright lights flash and nursery rhymes blare. Two men who have no water collapse in the desert. Two men with bandaged wounds and IVs are shown in a hospital.
► We see several video clips of war scenes with explosions and flashes of fire, tanks moving through streets and armed military personnel. We see a man's home that has been robbed and shot up in a firefight. We see a tank being driven through a barbwire fence and gate.
► A man yells and throws furniture around a room when his wife tells him that she is leaving him for another man. A man taking a martial arts stance jumps toward another man and yells at him.
► A man talks about goats being used in training, for men to shoot them in the leg and others to practice bandaging them (we see a room filled with goats and a few have bandages on their legs). We see a man holding a gun to a puppy's leg (does not pull the trigger). We see a goat chained to a pole in a deserted area while a man talks about testing atomic weapons on goats. A man talks about people experimenting on animals and we see a cat hooked up to cables and a man holds a burning cigarette close to a kitten (the kitten paws at the man's hand and meows).
► A man yells at his young son and says, "Stop being so queer." A man yells at another man. We hear that two men disappeared. A man talks about military methods, including the use of "attack bees" and mutilating the enemy. A man talks about self-defense techniques: "You rip out his eye or stab him in the throat with a pen until blood spurts all over his buddies." A man says that he killed his hamster. A man talks about being trained to kill animals and that another man had stopped the heart of a goat. We hear that a number of goats were de-bleated.
► A man talks about having Crohn's disease and that steroids help (we see him injecting himself in a couple of scenes). A man gets colonic irrigation therapy and he cries and moans. A man has a prosthetic arm.

SUBSTANCE USE - We hear that eggs and water have been spiked with LSD and an entire military compound appears to be inebriated, a man is given LSD, people smoke marijuana while sitting in a hot tub, and a man accuses another man of procuring drugs. A man sits on a sofa with an empty glass in his hand and an empty bottle of alcohol next to him (he has presumably drunk the entire bottle), two men drink alcohol, a man holds a beer bottle, a man talks about another man having "burned out on the booze," and glasses of wine are shown on a table in front of a man and a woman. A man smokes a cigar. A man takes a prescription drug and injects himself in the arm a few times with a medication (he says that it is steroids for a medical condition).

MESSAGE - Not all warfare needs to be combative. 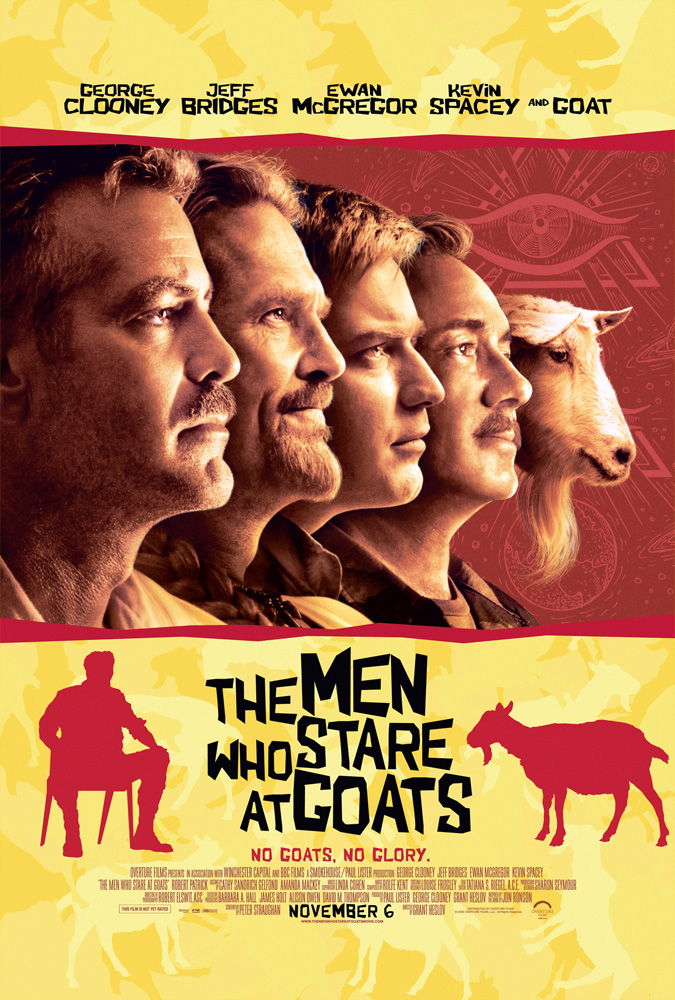