Why is “Men in Black: International” rated PG-13? The MPAA rating has been assigned for “sci-fi action, some language and suggestive material.” The Kids-In-Mind.com evaluation includes an implied sex scene between a human and an alien, several sexual references and implications of sex, and a few scenes of a bare-chested man and some cleavage revealing outfits; several alien attacks with a couple ending in the death of humans, one human dissolves into a pile of goo, aliens are attacked and killed in explosions and laser fire, several fight scenes, and a three headed snake that attacks humans and bites them on the face; and some scatological language.
Read our parents’ guide below for details on sexual content, violence & strong language.” In this reboot of the whimsical sci-fi franchise, two London-based MIB agents (Tessa Thompson and Chris Hemsworth) are assigned to investigate a series of alien attacks, but they also learn of a mole in the organization that handles intergalactic immigration. Also with Rebecca Ferguson, Kumail Nanjiani, Rafe Spall, Laurent Bourgeois, Larry Bourgeois, Emma Thompson and Liam Neeson. Directed by F. Gary Gray. A few lines of an unidentified language are spoken with English subtitles and an alien speaks his own language and a human translates. [Running Time: 1:55]

– A bare-chested man wakes up in bed with a sleeping alien woman who is face down under covers (sex is implied); he removes her spotted arm from his chest and we hear and see octopus suckers on her arm as they pop off his chest and he is then seen standing, shirtless while zipping his trousers (we see no flesh).
► A female alien says a human man is yummy. A man opens his shirt part way and asks how he looks and a woman laughs and re-buttons his shirt. An alien smiles at a woman, twirls his hips around as he sits on a couch, says she is “hot,” and cracks an imaginary whip over her head, implying bondage sex (no sex occurs).
► A man at a party says that his female friend has a fetish concerning learning about alien cultures; she objects and says everything seems to have to be sexual to men and that she is not going to fornicate with a “fat blue alien.” A woman angrily asks her working partner, “Are you pimping me to the alien?” A man says that a male alien wants to be shown a good time on Earth, implying sex. A man says that he does not want to be handcuffed to a horse again while showing the alien a good time (kinky sex implied). A man says he fell in love with a female alien whom he was surveilling and a woman says she has never been in love.
► A woman wears a tight-fitting blouse and short skirt with a side slit that reveals one leg to the upper thigh. Two women wear tight yoga pants and short tops that reveal cleavage and bare abdomens as they writhe to dance music. A woman wears a square-neckline dress that reveals cleavage and the long skirt has a slit that reveals both legs to the thigh when she walks or sits.

Men in Black: International SUBSTANCE USE

– A man sniffs a white powder in a vial at work and coughs violently (he says it will kill you or make you very inebriated), and a woman holds a glowing vial of anti-venom but we do not see it administered. Glasses of brandy are shown around a table and one man drinks from his glass and coughs violently, men and women and aliens at a club dance while holding drinks (no one imbibes), a party features a bar at which a man pours a clear liquor into a glass (no one drinks), men and women hold cups of an unknown beverage, a man says that he used to drink vodka and tequila, and a woman holds a large cocktail glass containing a yellowish liquid at home (he does not drink). Several men in a street scene smoke cigarettes in the background.

– Evil can be overcome with the truth. 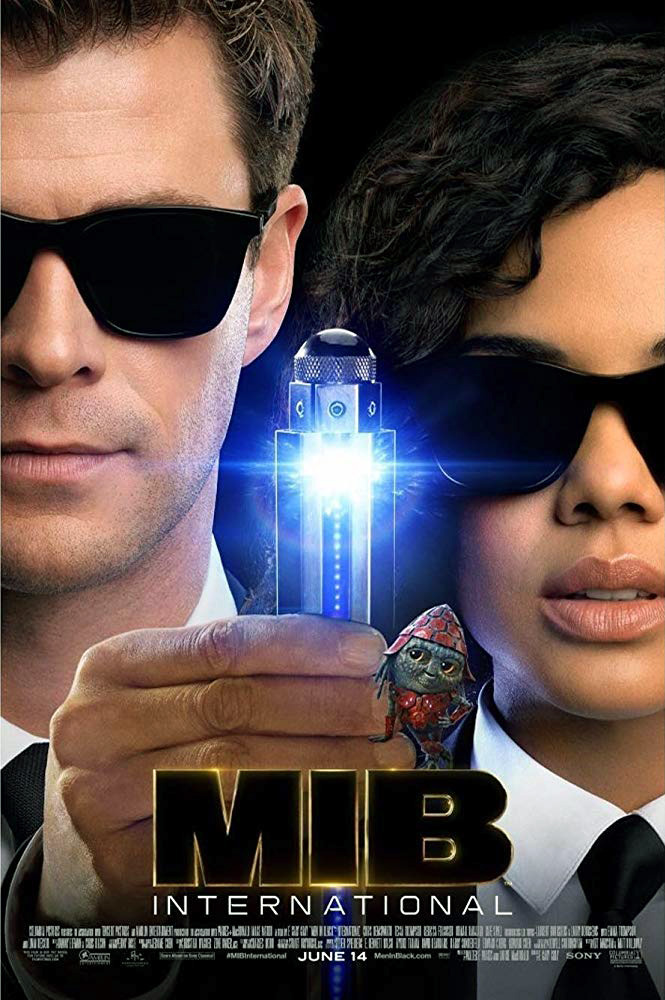