Why is “The Man from Toronto” rated PG-13? The MPAA rating has been assigned for “violence throughout, some strong language and suggestive material.” The Kids-In-Mind.com evaluation includes a kiss and some crude references to sex, a few implied murders with victims dispatched off-screen and without visible blood, a few torture sequences with one ending with a visible severed thumb, several fight scenes with weapons and hand-to-hand ending without visible blood, a few explosions, several arguments and at least 1 audible F-word and other strong language. Read our parents’ guide below for details on sexual content, violence & strong language. An inept fitness professional (Kevin Hart) is mistaken for a notorious assassin (Woody Harrelson), and is then forced by both the assassin and the FBI to find an important criminal. Also with Kaley Cuoco, Jasmine Matthews, Lela Loren, Ellen Barkin and Pierson Fode. Directed by Patrick Hughes. A few lines of dialogue are spoken in Spanish, Russian and French with English subtitles. [Running Time: 1:50]

The Man from Toronto SEX/NUDITY 1

– A man quickly kisses a woman goodbye.
► A man tells a woman, “It’s baby-making time” (no sex occurs; they are in bed and she is dressed while he is shirtless showing his bare chest and partial abdomen). A pregnant woman is seen seated in a restaurant and a man refers to her belly as a loaf. Several gym scenes show shirtless men (we see bare chests, abdomens and backs), and one scene shows a woman wearing tight-fitting bike shorts and a sports bra (we see her from behind).
► A woman says, “There is nothing sadder than a hard man gone soft.” A man shouts that a chaotic situation is “pig sex.”

The Man from Toronto VIOLENCE/GORE 5

– There are several shootouts and fights with little blood visible. A man is cuffed to a chair while another man tells him a story of a bear filleting a man as he takes out knives; the victim gives information and is later shot off-screen (we do not see the result). Four men are cuffed to chairs, three men pull handguns, and a different man gets out knives and cleavers, threatening each man with them; the man with the knife accidentally cuts a cuffed man under one eye, leaving a dark red mark, vomits on the victim and the victim vomits too (we see goo) as the other men scream and the wounded man is taken away as a man says he will cut off a thumb and we hear screaming off-screen; a man then puts a plastic-looking severed thumb into a small bag of chips.
► A man hangs from the rafters in a cabin basement by his cuffed hands and two other men force a man to start torturing him, and the man verbally threatens him while another man says the threatening man shot a whole room full of men in Minneapolis (we later hear that this never happened); a tear gas bomb rolls into the room and explodes in clouds of smoke as many soldiers and agents enter shooting, the people run out as three fireballs fill the screen and a car bursts into flames. A tear-gas explosion causes fireballs and the flame of a flamethrower hits a wall; many empty cars outside explode and are thrown into the air.
► A man on a cargo plane pulls a handgun, hits a man in the stomach, bends back his fingers and we hear screams; he punches, kicks and throws several other men and they fall unconscious as he shoots out a window and pushes a man’s face into it (we do not see blood), he slits the throat of the pilot (no blood is shown) and the plane dives causing two men to fall out the cargo door and two other men slide out but are pulled back by a cable; after the plane is landed, two men leave and the plane explodes in flames and smoke.
► A man is thrown off a hotel balcony and clings to a series of chandeliers to make it to the floor, shouting in fear; he ends up dangling from a cord between two men pointing guns at each other and one man shoots the first man in the buttocks and the scene cuts to the shooter cleaning the wound (we do not see flesh or blood). A man accidentally shoots another man in the leg (we do not see blood).
► A man chokes another man and he and a third man fight with kicks and punches, sometimes throwing metal cups that hit no one, until police arrive and the two men escape in a stolen police car. A man on a golf course hits another man in the head and stomach with a golf club and below the frame, beats him (no blood is seen), and then shoots him below the frame. A man beats another man with a golf club but does not kill him and he attacks a man next but is grabbed by another man.
► A man slides down a laundry chute with a duffel bag of money and runs away to a home where a woman with a rifle threatens him for the money, but he escapes. Assassins with various weapons including a chainsaw and a sword attack two men; a large fight ensues with assassins wielding a chainsaw, sword, axes and clubs and using kicks, punches, chokes and throws; a man shoots out a streetlamp, the fight moves into a gym where people shout and run and someone throws an axe that lodges in another man’s boot (no blood shows) as the man screams; a man throws another man below the frame and cuts him up with a chainsaw (nothing is seen, but screams are heard). A woman chases two men into a factory and points a rifle at them until one man pulls a lever that opens a trap door below her and she drops into a vat of boiling liquid, screaming. We see a man with a sword slashing two men without drawing blood (we see this on a computer screen without blood shown).
► A man borrows a souped-up car and drives fast, swerving around an elderly woman using a walker, he stalls on train tracks and runs away; we see bruises and swelling on his face as he watches a train hit the car, drag it forward, demolish it in flames, and send thousands of 100-dollar bills into the air. A man chokes another man in a restaurant, but he escapes; the attacker later calls the other man and berates him for killing “her” (a car) and the second man panics and tells him to stop.
► A man holds a knife to a driver’s throat and pushes him out onto the highway (no cars hit him). Police cars chase a box truck, threatening with guns, but eventually release the truck and driver. A man threatens to kill several people and a woman threatens to kill a man and a woman, but these deaths do not occur. A flashback shows a man pointing a handgun at another man, seeing a child in a car, and letting the intended victim go. Two men spar lightly in a ring and we hear punches, but see no injuries. A man has a long shelf of handguns at home.
► A man sweats in a plastic exercise suit and faints, falling off-screen with a thud; he falls off a chin-up bar without injury, and hits himself in the eye with an exercise elastic band, without injury. Two men argue throughout the film. A man argues with a woman and another man argues with another woman. A man argues with three other men. A man argues with a man and a woman.


The Man from Toronto LANGUAGE 5

The Man from Toronto SUBSTANCE USE

– A man in a hotel room drinks a glass of whiskey, two women pour champagne at home and each takes a sip from her glass, a man carries a bottle of champagne in a box, two restaurant scenes include two men and two women sipping wine with other glasses of wine untouched on other tables.

The Man from Toronto DISCUSSION TOPICS

The Man from Toronto MESSAGE 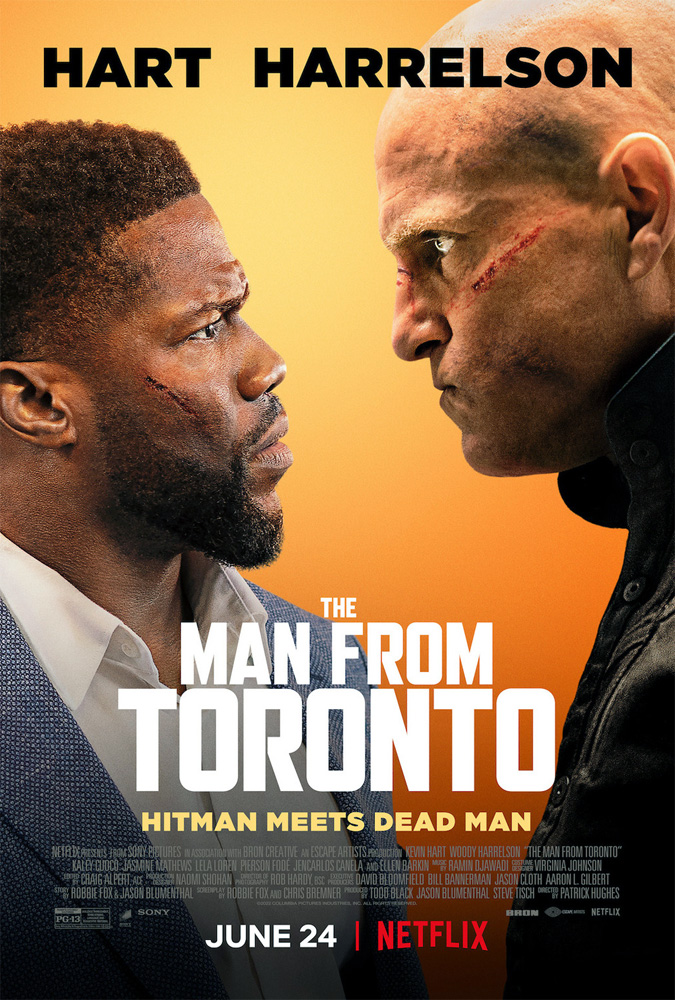