Why is “Maleficent: Mistress of Evil” rated PG? The MPAA rating has been assigned for “intense sequences of fantasy action/violence and brief scary images.” The Kids-In-Mind.com evaluation includes a few kissing scenes and several cleavage revealing outfits; many scenes of armed attacks leading to death on and off-screen with some bloody wounds shown, and while the planned mass murder of woodland creatures is halted many creatures do die; and discussions of war and peace and some name-calling. Read our parents’ guide below for details on sexual content, violence & strong language.” Taking place five years after Maleficent, the misunderstood Dark Fay (Angelina Jolie) has raised her human goddaughter Aurora (Elle Fanning) to become Queen of the Moors. When Aurora accepts a marriage proposal from Prince Philip (Harris Dickinson) hoping to unite their two kingdoms, she doesn’t realize that Phillip’s mother (Michelle Pfeiffer) may not actually be supportive. Also with Juno Temple, Ed Skrein, Chiwetel Ejiofor and Imelda Staunton. Directed by Joachim Rønning. [Running Time: 1:58]

– A winged woman wakes up and we see her wings wrapped around most of her body and we see her bare shoulders (with small wing sprouts on the flesh), bare abdomen and legs to the thighs; a gauze fabric is wrapped around her chest and reveals the outline of her breasts, as well as cleavage and the possible shadow of a nipple. A winged woman’s costume seems to be a strategically placed second skin covering parts of her breasts and nipples and revealing cleavage and part of her abdomen and back. A woman wears a gown that has a mesh inlay cut across her cleavage and down her abdomen that is flesh toned. Several winged women are shown wearing outfits that reveal cleavage, bare abdomens and bare legs to the upper thighs. Two fairies wear low-cut tops that reveal cleavage. Women wear low-cut dresses that reveal cleavage in several scenes throughout the movie. A young woman wears a low-cut dress that reveals cleavage. Several winged men are shown with bare chests and abdomens. A young man’s shirt hangs open revealing part of his bare chest.
► A young man and a young woman kiss and embrace in a couple of scenes. A young man proposes marriage to a young woman, she accepts and they kiss. A wife kisses her husband briefly while he is unconscious. A young woman kisses a young man on the cheek.
► A young man holds a young woman around the waist. A winged woman tells a young woman, “I’ll see you at the christening” and winks at her; the young woman giggles and she kisses her husband. A woodland creature kisses another woodland creature on the cheek.

Maleficent: Mistress of Evil SUBSTANCE USE

– People are served and drink wine at a dinner celebration.

– Striving for peace is a worthy endeavor. 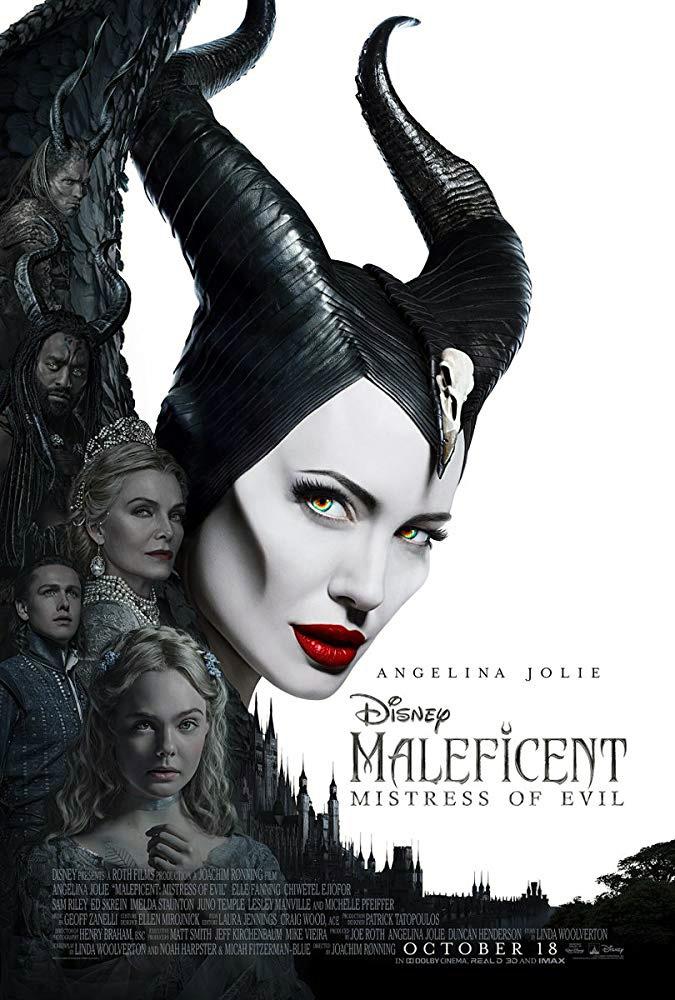