Why is “Lucy in the Sky” rated R? The MPAA rating has been assigned for “language and some sexual content.” The Kids-In-Mind.com evaluation includes a few sex scenes without nudity between a man and a woman, several kissing scenes, and cleavage revealing outfits; several sequences of space missions from blasting off from Earth to space walks, many arguments, the unraveling of a woman’s mental condition after returning from space, and the death of a family member; and at least 15 F-words and other strong language. Read our parents’ guide below for details on sexual content, violence & strong language.” Based on actual events: An American astronaut (Natalie Portman) returns from 10 days in space to find life on Earth lacking. She becomes obsessed with going back to space, abandons her marriage and has an affair with a colleague (Jon Hamm), and when she is grounded and her new lover begins an affair with a rookie mission candidate (Zazie Beetz), she makes a desperate decision. Also with Dan Stevens, Colman Domingo and Ellen Burstyn. Directed by Noah Hawley. [Running Time: 2:04]

Lucy in the Sky SEX/NUDITY 5

– A woman wearing a dress sits on a bed with her back to the camera and she gasps and leans back, revealing the partial back of a man’s head whose face is between her legs (evidently performing oral sex); she gasps and lies back on the bed in shadows and the scene ends. A woman wears a miniskirt that ends at mid-thigh and climbs onto a man in the bed of a pickup truck where they kiss for several seconds; he lies on top of her and she wraps her legs around him, both thrust (they remain clothed) and she rolls over on top of him as the scene ends.
► A man sits on a couch and a woman wearing a miniskirt straddles him, they kiss for several seconds, begin to argue and go outside where they kiss for a few seconds and walk inside after the woman says she “wants to feel something,” and the scene ends (sex is implied). A man kisses a woman and a woman kisses a man who does not respond. A man puts his arm around a woman bowler with the excuse that he is helping her roll the ball. A man and a woman lie clothed on a bed and talk for a few seconds; the scene cuts to nighttime where the couple is in bed facing away from each other (no sex is suggested).
► A man meets a date in a cafe, where she is sitting with a second woman with whom the man is having an affair, and the woman’s husband; the second woman looks shocked and the first man leaves. A woman tells a man that she agrees to have a baby after her next space mission.
► A man sits in front of a TV, shirtless. A woman wears a tank top and running shorts. A woman wears a couple of V-necked tops that show cleavage.

Lucy in the Sky VIOLENCE/GORE 5

Lucy in the Sky LANGUAGE 6

Lucy in the Sky SUBSTANCE USE

– An elderly woman drinks whiskey, a woman drinks whiskey, a man drinks Scotch while sitting on a couch, a man and a woman drink from beer bottles on their porch, a man and woman drink from beer bottles on a deck, two women and a man at a table and a man on a bench drink from beer bottles in a bowling alley and a woman holds a beer bottle as she bowls, a man says that another man “is hammered,” two men and two women at a table at a bowling alley drink a dark liquor, a drunken woman staggers out of a pickup truck and into her house where her husband asks if she is drunk and she says “No,” a man and a woman each drink from a can of beer, two women and a man in a café sip wine, men and women at a wake hold glasses of what may be alcoholic drinks, and men and women hold cans of beer and glasses of mixed drinks at a house party (no one drinks). An elderly woman smokes a cigarette in extreme close-up while wearing an oxygen tube in her nose and another woman tells her that she will kill herself with cigarettes, an elderly woman takes a pack of cigarettes and walks off-screen while saying that she will “smoke outside like a hobo,” and we see an ashtray containing old cigarette butts.

Lucy in the Sky DISCUSSION TOPICS

Lucy in the Sky MESSAGE

– Many believe mistakenly that women are too emotional to work in space and will suffer from “space madness.” Desperation leads to problematic choices. 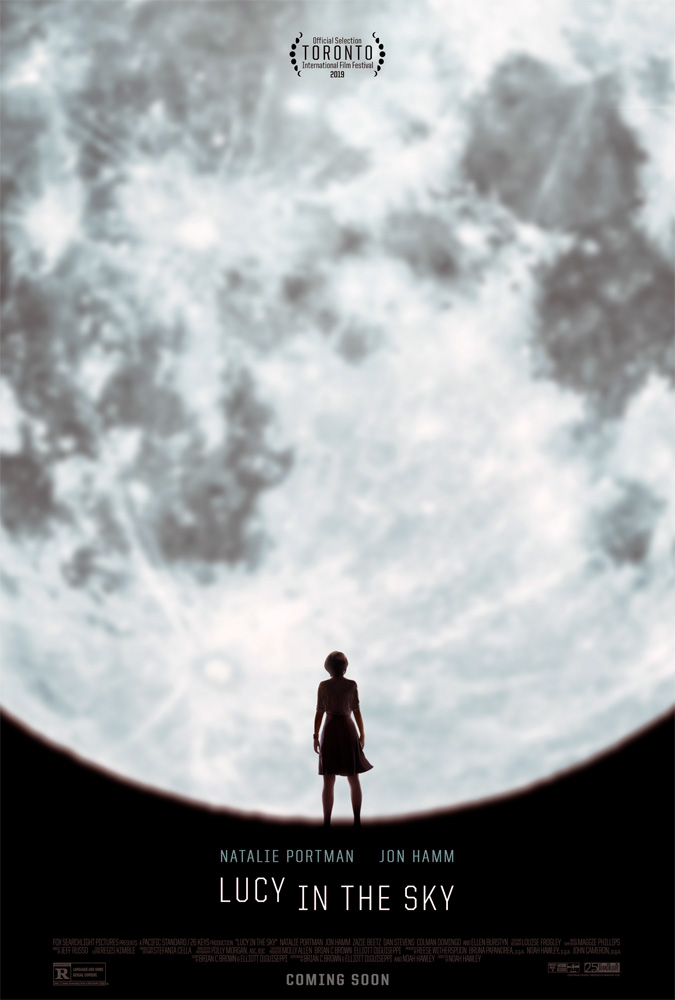