Every December four generations of Coopers celebrate Christmas Eve together at the parents' (Diane Keaton and John Goodman) house. On the most recent occasion several embarrassing surprises create chaos for the dysfunctional family, driving its members to work on building stronger bonds with each other. Also with Marisa Tomei, Olivia Wilde, Jake Lacey, Ed Helms, Amanda Seyfried, Alan Arkin and the voice of Steve Martin. Directed by Jessie Nelson. [1:45]


VIOLENCE/GORE 3 - A woman is confronted by a police officer at a shopping mall after she steals a large brooch by putting it into her mouth and a store detective forces her to spit it out into his hand (no saliva is seen); the police officer handcuffs her and puts her in the back of his cruiser as she argues with him several times and he ends up releasing her (please see the Sex/Nudity category for more details).
► A woman tells a friend that she had a sister with a weak heart and in a later scene, her mother and father argue about their toddler who died and we see a brief flashback of a one-year-old girl staring into the camera. An elderly man sees a vision of his deceased wife and their young daughters dressed as angels for Christmas in the 1950s, standing at the doorway to a dining room and he smiles.
► A teen boy tells another teen boy that he smells bad and a teen girl agrees; we see a large sweat stain on the "smelly" teen's underarm area and he and the girl argue briefly until the first boy punches the other boy in the face and the screen goes black (the punched boy has red marks on his right cheek, under his eye).
► A dog releases flatulence at a family dinner while a man says grace and several people abruptly complain of the smell; the lights go off and when they come back on, the turkey is on the floor, the great grandfather is face down in his plate of food and women shout; we see EMT vehicles with sirens and lights operating, then a hospital corridor where the elderly man is awake and lying on a gurney as medics wheel it into a treatment room; we later hear that he has had a minor stroke and will be fine.
► A young man stomps up to a teen couple kissing in a mall and calls them names, saying the girl should be with him instead of the other teen boy; a small boy rushes up to the trio, shouts to the bully to leave the other two alone, pulls down the bully's jeans (we see the shirt tail, but no flesh), and punches him so that he is thrown into a wall (we see that this was the small boy's imagination and that the bully stomps on the small boy's foot below the frame and the small boy runs away). A flashback shows a little girl on skates purposely knocking her older sister down while the older girl is performing a spin on the ice in a rink (no injury occurs).
► An elderly man eats at a diner twice a day for months to visit with a much younger waitress and the man becomes angry when she later tells him it is her last day at the diner, because she is moving to Mississippi; they argue and he storms out, but returns and notices a long red wrist-slash scar on her wrist. A man and his ex-wife argue in several scenes and raise their voices. During a large family dinner a man and his ex-wife shout loudly at each other and their 8-year-old son throws mashed potatoes on both of them and shouts for them to stop fighting. A wife and her husband argue rather loudly about getting a divorce. A woman argues mildly with a soldier about Evolution and about God, saying that God insists, "Love me the most or go to hell." Two women sit on either side of a man's hospital bed and argue loudly; a nurse tells them to stop and when they continue arguing, he orders them to leave the room. A man tells a woman that happy couples often argue and fight.
► We see a man push another man in a wheelchair in a hospital and a woman sits to the side of a corridor in a wheelchair. A man walks through a hallway wearing a hospital gown and wheels his IV stand with him; we see an IV line extending from a bag of clear solution to his arm, where tape holds it in place. A woman in a hospital waiting room cries.
► A young girl gives her mother a Christmas card and the woman vomits a white glob onto it and puts her head onto a table; the girl looks disgusted and scared. A grandfather straightens his young granddaughter's clothing in a bathroom at the sink at home and says the dump salad probably did "it" (a bout of diarrhea is implied, but not seen). A man snorts very loudly in half a dozen scenes and in another scene his mother imitates him in a grocery store. Two scenes feature one of two women spitting white and yellow chewed food across dining room tables during holiday meals. A dog eats food from a dining room table in several scenes. A dog eats part of a pot of mashed potatoes on the counter in a kitchen; a woman cooking puts pepper into the potatoes and serves them anyway (her family complains of too much pepper). An elderly woman feeds a dog from her dinner plate with her fork, afterwards continuing to use the fork herself. A dog eats several cookies and a male voice over states that the dog is stress eating because of emotions. A woman gives her sister a bathroom shower seat for a gift and both women laugh.
► Several dozen men dressed as Santa Claus appear at shopping mall stores, in cars, and on buses as children stare in wonder. We also see several houses and stores decorated for Christmas, with one house decorated for Hanukkah.

SUBSTANCE USE - A young man tells an older couple that his mother took away his car keys after finding him in his car with a bong, and a soldier shows a picture of himself as a teenager with long hair and holding a marijuana cigarette. We see glasses of wine at all the adult place settings during a family dinner, a man wipes off a champagne bottle in his kitchen, a large family sits and the adults drink from glasses of wine, a soldier in an airport lounge drinks a bottle of beer at the bar and a man tries to buy a woman a martini (she refuses), a man offers to buy a soldier a drink and the soldier accepts and orders a martini for a woman instead, a person at a table in an airport lounge has a glass of wine in front of him, a man and a woman drink double shots of clear liquor and the bottle sits on their table in a lounge and we see a glass of wine on another table, a man tells a woman's parents that he does not drink alcohol because he is Mormon and then says he is joking, and a male voice over states that a young girl's mother was 6 eggnogs to the wind (we do not see the woman). A woman tells her parents that her fiancé smokes (he does not smoke).

MESSAGE - Families can be challenging, but the relationships can be rewarding. 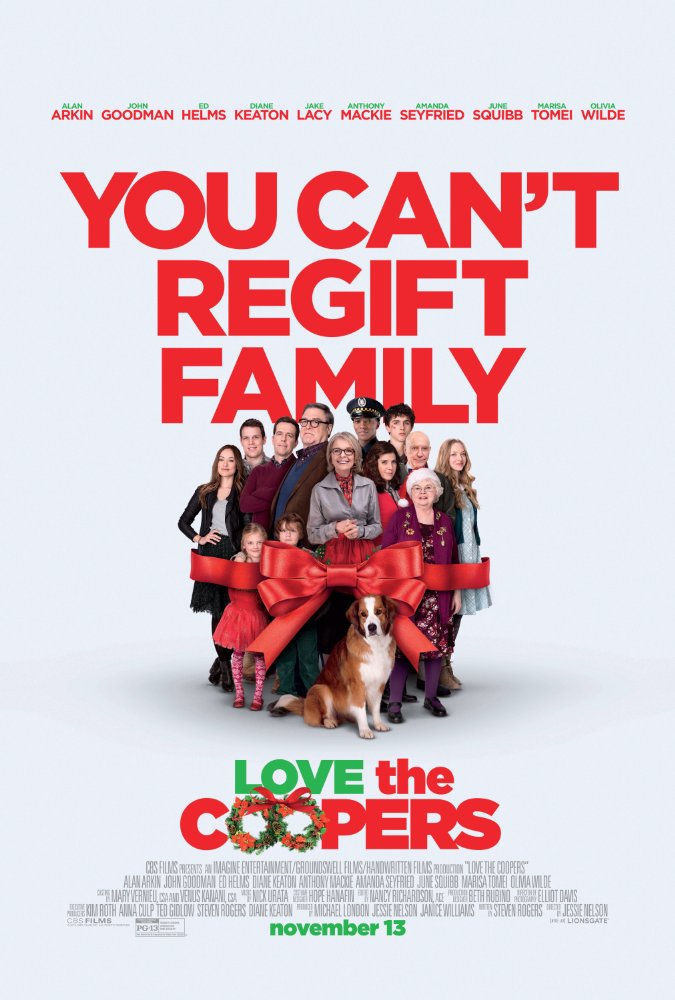