A 14-year-old girl is murdered by her neighbor, but her spirit continues to move amongst her family and friends unseen and unheard by most. She relates her own story, while trying to get someone to find her hidden body. Based on the novel by Alice Sebold. Also with Rachel Weisz, Mark Wahlberg, Susan Sarandon, Stanley Tucci, Michael Imperioli, Saoirse Ronan, Rose McIver, Carolyn Dando and Nikki SooHoo. Directed by Peter Jackson. [2:15]

SEX/NUDITY 4 - A husband and his wife are shown in bed together (they are both clothed), they kiss, he moves on top of her, she reaches for the light and the scene ends (sex is implied).
► A husband and his wife kiss. A teen boy and a teen girl kiss and hold hands. A teen boy imagines a teen girl is a different teen girl, she says, "Kiss me" and he kisses her.
► A teen girl is reprimanded for drawing a nude female in art class (we see the sketch and breasts and nipples are visible while her hand covers the genital area). We see a man sitting in a bathtub (bare chest and knees are visible).
► A teen boy talks to a teen girl and moves closer to her, and they appear to be getting ready to kiss until they are interrupted.
► A teen boy tells a teen girl she's beautiful in a couple of scenes. A teen boy tells a teen girl to meet him for a date. A woman talks to her granddaughter about a boy and asks, "Did you kiss him yet? Does he like you as much as you like him?" We hear about a teen girl "finding love."
► A teen boy and a teen girl go into a cornfield and it is implied that there will be some sexual activity.

VIOLENCE/GORE 7 - A man invites a teen girl through an underground hatch, to see something he has built; she reluctantly joins him, she becomes uncomfortable when he comments about her appearance, and he throws her on the ground when she tries to get away (we understand that he kills her).
► A man with a baseball bat is attacked by a teen boy who thinks that he is molesting his girlfriend: the teen boy pushes the man to the ground, picks up the bat and beats the man repeatedly on the head and body (we see the man flinching and covered with blood), and the teen leaves the man lying motionless in a field and we see a teen girl watching and crying (a man is also watching).
► A man falls over a steep incline, crashes into a large tree, we hear his head crunch, he strikes a rock ledge we hear another crunch, his neck twists unnaturally and he lies motionless with twisted limbs and broken eye glasses.
► We see several dead bodies in various locations and hear the details of their murders: each is shown with gray tinged skin and partially covered by earth or water, several are women, several are teen girls and one is 6 years old.
► A man throws a heavy sack, soaked with blood, into a large floor safe. We see clumps of mud on a bathroom floor and smears of blood, and we see blood and a straight razor on a bathroom sink.
► A teen girl drives a car recklessly with a young boy in the back seat who is choking on a stick and whose skin is turning blue (they make it to the hospital and the boy is OK).
► A teen girl walks through a thick field, it becomes flooded with water, she sinks underwater and we see her motionless.
► The spirit of a teen girl stands in a bathroom where a man (her murderer) bathes and she screams loudly causing a straight razor that had been on the sink to fall to the floor.
► A teen girl breaks the window of a of a basement, climbs into the house, walks through searching for something, the homeowner returns and hears noise from upstairs, he runs to investigate, the girl panics, climbs out the window and onto a roof, slips off and lands hard on the ground; she gets up and runs, jumps a fence and gets away.
► A teen girl runs through streets calling for help and to her parents but no one seems to hear her. A woman becomes agitated when questioned by police about her missing teen daughter.
► A man approaches a young woman in a parking lot and asks her if she wants a ride; she says no, he continues to prod, and she becomes abusive and leaves. A man watches as a teen boy and a teen girl go into a cornfield. A man watches a teen girl jogging.
► A police officer tells a woman and a man that they found their daughter's hat and a significant amount of blood in a structure built under a cornfield. A boy says he saw his sister (who is dead) and that she came into his room and kissed him on the cheek. A woman yells at her adult daughter about not coping with the death of her teen daughter.
► A man breaks many bottles with model ships inside against a table and glass shards spray a room. A gazebo where a teen girl was standing disintegrates and sinks into the ground.
► A teen girl says "I want him dead, I want him cold." A teen girl talks about "life leaving me." A teen girl tells another teen girl "you're dead." A boy says, "Susie's in the in between." A teen girl says to her father "she's dead isn't she?" about her sister who is missing. We hear that a teen girl died from leukemia.
► A man and a woman are shown crying and grieving in several scenes.
► We see a large sinkhole in the ground and we see people disposing of large and small items into it and watch as larger items (like a refrigerator) sink into and disappear in a pool of muck at the bottom. A frying pan catches fire on the stove.

MESSAGE - Everyone deals with grief in different ways. Everybody dies. 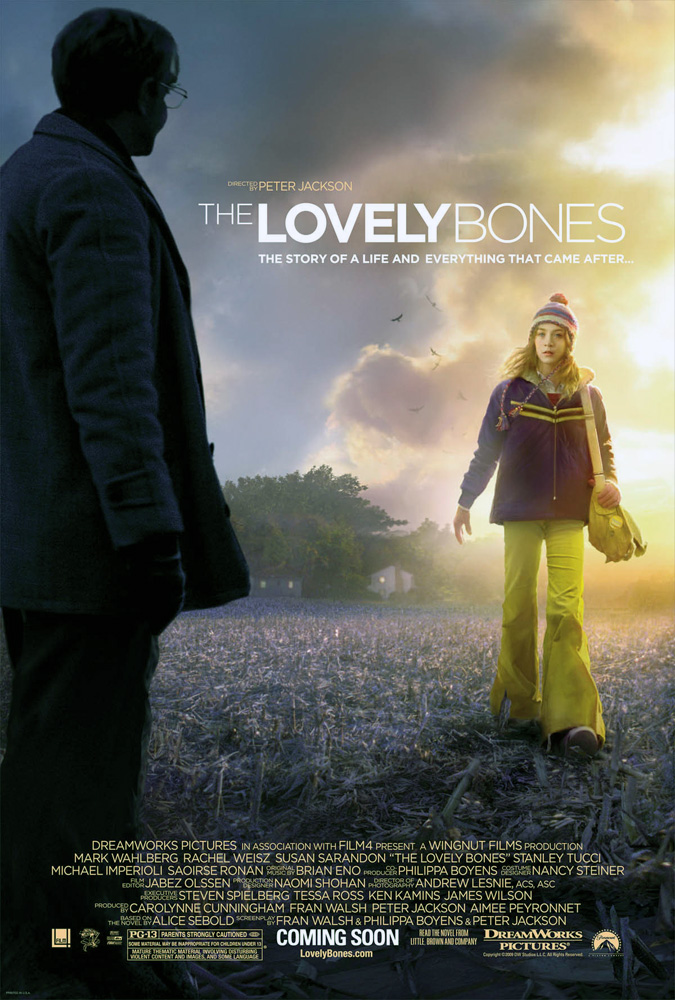