Why is “The Lost Husband” rated PG-13? The MPAA rating has been assigned for “some suggestive references.” The Kids-In-Mind.com evaluation includes several kissing scenes, discussions of teen pregnancy and a few cleavage-revealing outfits, two people accidentally locked in a walk-in fridge, several scenes of bullying, discussions of abandonment and frequent arguments, and some strong language. Read our parents’ guide below for details on sexual content, violence & strong language. A woman (Leslie Bibb) moves with her children to her estranged aunt’s (Nora Dunn) Texas goat farm after her husband dies. She is initially awkward, as she works there and gets to know the farm manager (Josh Duhamel) and she learns about his tragic past. Also with Isiah Whitlock Jr., Sharon Lawrence and Herizen F. Guardiola. Directed by Vicky Wight. A song’s lyrics are in French without translation. [Running Time: 1:49]

– A man and a woman kiss briefly. A woman kisses a man on the cheek. A man and a woman kiss for several seconds in a couple of scenes. A man and a woman dance closely at a party and he sings to her and then he walks away and leaves. A man kisses a woman at a market for several seconds in front of three women who stare, gaping. A man opens a walk-in refrigerator to find a man and woman who were locked in, slumped together on a bench and asleep; the couple wakes up and rushes away from each other.
► We hear that an 18-year-old unwed mother left her baby with her parents and moved away, marrying and divorcing several men. Three women tease another woman about the possibility she is having sex (“making cheese”) with a farmhand and later, one of the first three women says, “No way is she having sex with the farmer.” A man tells a woman that his ex-husband took the house when they divorced; the woman seems startled and the man says it was a joke.
► A woman wears a long opaque gown with a V-neckline that reveals cleavage in a couple of scenes. A woman wears a crop top that reveals her abdomen, under a long sleeved jacket. A woman is shown from the waist up and she is wearing a large towel wrapped around her under the arms (we see bare shoulders). A woman wears tight short-shorts as she dances with another woman and two other women dance together as well. A woman wears a long dress with thin straps that bare her shoulders and arms without cleavage shown.

– We hear that an elementary school girl was bullied by a male classmate and that when she hit him, she was suspended from school; we see her mother argue briefly with the school principal. We hear that a young girl was bullied and pushed into a fence and we see a nurse holding a compress to the girl’s forehead, with blood staining the girl’s face and shirt. In a school corridor, a man confronts a boy in a threatening voice, saying, “If you touch her again I will find you”; we hear that the girl and the boy were both suspended.
► A man tells a young girl and a young boy to defend themselves at school and we see the girl push his hand away as he practices reaching to push her; the child’s mother shouts at the man about teaching her children to fight. A woman dreams of being a toddler taken away from home by a woman, she wakes with a gasp and the next day goes to an abandoned house where she finds a picture of herself with her aunt and uncle. A woman confronts and argues with another woman, cries, and drives to her mother’s house, argues with her, and leaves.
► A woman walks outside at night to find a walk-in refrigerator door open next to a barn; she carries a pole for a weapon, walks inside and screams when she sees a man inside and the door slams shut, locking them inside; they argue and she does exercises to stay warm, but both fall asleep (please see the Sex/Nudity category for more details).
► A 10-year-old girl has a long scar down her calf from knee to ankle and we hear it was caused in a car crash that killed her father; the girl walks with a slight limp and a boy at school calls her “limper.” A woman shows a preteen girl a scar on her arm.
► A man and a woman argue for a few seconds in three scenes and in the third scene, she shouts. Two women argue briefly. A woman is irritated about a store clerk’s questions about the whereabouts of the first woman’s husband, so the first woman drives away, stops by the side of the road, and cries loudly. A woman enters a washroom stall and sits sobbing. We hear that a woman’s husband died in a car crash, an older woman’s husband died of Parkinson’s disease, and a man’s wife suffered a stroke and is wheelchair bound. We hear that a woman has a congenital heart defect. A woman says that she has arthritis and that sometimes her fingers swell. In a flashback, we see a woman shout at her husband several times before he drives away, but he does not stop.
► A woman finds another woman and her two children at the dinner table, all wearing large tinfoil hats. A woman reads her palm, telling her that she has two rings that mean two families; the reader lays a hand on the other woman’s shoulder and says a deceased husband is still around. Two women walk to a field at night, build a small fire and light candles for a séance; one of the women (a palm reader) tells her friend to talk to her dead husband, which she does for several seconds until a gust of wind blows out the fire and candles and the reader says, “You nailed it.”
► A woman on a farm grunts many times as she walks through a field over rocks and grass, and shouts, “Ow” as she tries to open a gate, but we see no injury. A woman grunts as she carries supplies in a store and in a kitchen as she lifts a jug of milk. A woman tells a man that she has not showered today and he says, “The goats don’t care how you smell.”

The Lost Husband SUBSTANCE USE

– A man and two women drink from glasses of wine on a porch, two women sip wine in a house, a few full beer cans are seen on a back bar in a tavern and a few men and women hold bottles and cans of beer, a woman sips from a can of beer, a man and a woman each hold a can of beer while seated in a tavern booth, and a woman tells another woman that she “had a toxic relationship with alcohol.” A woman lights and smokes a cigarette in close-up on a porch in two scenes.

– Overcoming the death or disability of a spouse is difficult. 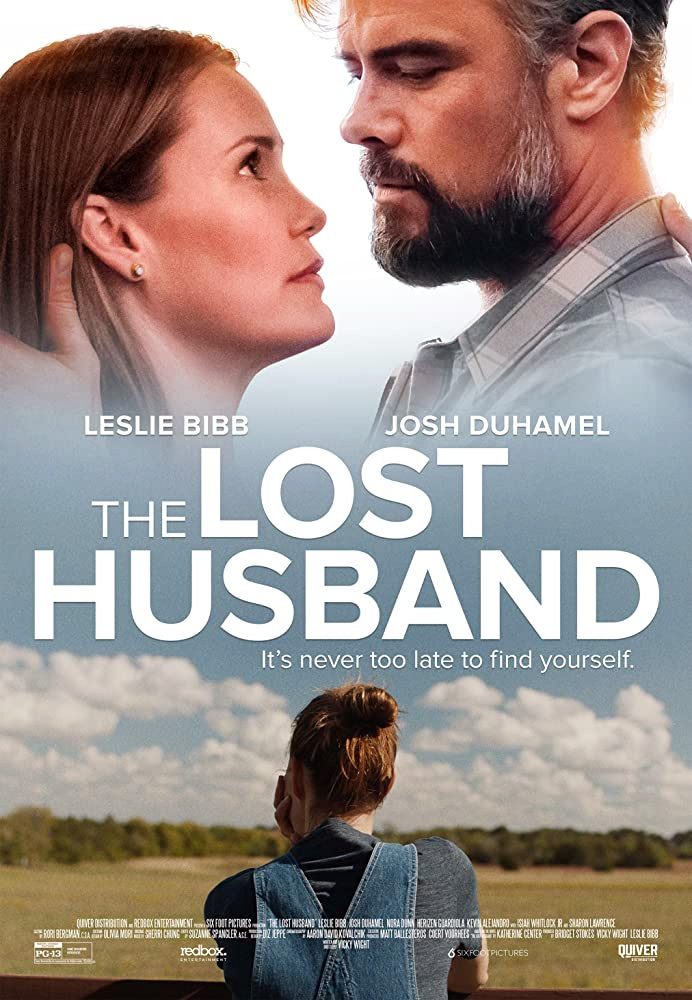