Why is “Lizzie” rated R? The MPAA rating has been assigned for “violence and grisly images, nudity, a scene of sexuality and some language.” The Kids-In-Mind.com evaluation includes a couple of extended scenes with female full frontal nudity, implied rape, romantic sexual encounters, two gruesome and bloody murders and a little mild language. Read our parents’ guide below for details on sexual content, violence & strong language.

Based on the story of the gruesome murders of Andrew (Jamey Sheridan) and Abby Borden (Fiona Shaw) in 1892. Although suspected of committing the murder, Andrew’s daughter Lizzie (Chloë Sevigny) was not convicted. Also with Kristen Stewart, Kim Dickens, Denis O’Hare and Jeff Perry. Directed by Craig William Macneill. [Running Time: 1:45]

– A woman undresses and we see her fully nude (her bare breasts, abdomen, pubic region, buttocks, legs and back are shown) for an extended scene (please see the Violence/Gore category for more details). A woman undresses in a closet and we see her bare breasts, abdomen and back (please see the Violence/Gore category for more details). A fully nude woman washes blood off her body in a basin (we see her bare side, breast and buttock). A woman undresses and we see her wearing her underclothes that reveal cleavage and upper chest. Women at a theater performance wear low-cut evening gowns that reveal cleavage.
► Two women kiss tenderly and then passionately as one unfastens her dress (we see a bit of her undergarment), they moan and breathe rhythmically as they lift their skirts and one woman moves rhythmically on top of the other woman with her hand under her skirt. A married man enters a woman’s (she’s his maid) room where she is sleeping and wearing a night dress; he sits on her bed and rubs her arm and then her clothed thigh in an obviously unwanted sexual advance (rape is implied). A woman wakes to noises in the house and investigates; she hears her father’s voice coming from a woman’s room as he says, “Do what I say now” (rape is implied). A married man approaches a woman and touches her face tenderly, he moves closer to her and she tries to pull away as the scene ends (it’s not clear if anything else occurs).
► A woman dresses another woman and touches her arm and hip tenderly; they move close to each other and nearly kiss. A woman rests her head on another woman’s shoulder.

- A fully nude woman (please see the Sex/Nudity category for more details) with a hatchet strikes a woman in the back of the head (blood splatters), she falls to the floor and the hatchet wielding woman strikes her several more times (we see blood splattering on the attacker and we hear blows land and bones breaking). A fully nude woman (please see the Sex/Nudity category for more details) with an hatchet moves toward a man and raises the hatchet over him, and then panics and backs away; another woman takes the hatchet and strikes the man repeatedly (we see blood splatter on her face and around the room and hear splattering and crunching. We see the dead bodies of a man and a woman with very bloody wounds on their faces and heads and blood splatters are shown on the walls and pooling around them (this scene is repeated several times throughout the movie). A man threatens a woman and pins her against a wall by the throat (she gags), lifts her skirt as if he will rape her and they are interrupted. A man grabs a woman from behind with his hand over her mouth and speaks to her angrily, calling her an insulting name.
► A man takes a hatchet and cuts the heads off several pigeons as his adult daughter pleads with him to stop and she cries (we see the bloody blade, table and the severed, bloody heads and bodies); the birds are prepared and served to several people as a meal. A woman cuts a pigeon's head off with a hatchet (we hear the squish and thud and we see blood on the table and the blade).
► A woman breaks a mirror and places the shards of glass on the floor outside a door where her father is forcing his maid to have sex; we hear him yelp when he later steps on the glass. A man pounds on a front door and yells repeatedly to be let in.
► A woman has a seizure in a crowded theater and we see her thrashing on the floor with people attending to her. A woman seems to be about to have a seizure, but she does not collapse and it passes.
► People are shown mourning over two closed coffins. We hear loud knocking on a door at night and a man takes a gun from his night table drawer along with a flashlight and searches outside (there is no one there). There is a loud crashing noise from a dark alley behind a woman and she is startled. A woman steals money and jewels from her parents' room, stages it to look like a robbery and pawns the jewels. A woman burns several documents in a stove. A man angrily searches the office of another man looking for a document that he is unable to find.
► A woman is taken to a prison cell and locked inside. We see a woman in a courtroom as testimony takes place.
► Several threatening messages are received by a man at his home and they read, "No one can save you from what is to come," "Your sin will find you," "You will bleed," "Your end is near," "You will all die in pain." A woman threatens a man and he becomes angry, calling her a name.
► A woman calls her father a coward and a liar and he slaps her across the face; she leaves the room, locks herself in her room, screams and collapses. A woman pleads with a man and tells him that another man is incompetent and thus cannot be the custodian of her inheritance. A man reprimands his adult daughter and tells her, "You'll not leave this house unaccompanied," and they argue until he relents and she leaves. A woman asks her father, "Have you done something?" and he replies with insults and accuses her of bringing ridicule to the family. A police investigator questions a woman after the murder of her father and step-mother and asks, "Did your father have any enemies?" Two women speak to each other disparagingly. A doctor recommends institutionalizing a woman after she has a seizure. We hear that a woman's mother died after a long illness and the woman cries and grieves. A woman says, "I'm ashamed to be his daughter." A man tells a woman, "You are just another girl. You are nothing." A man calls his daughter an "abomination." A woman says, "Every man with a pulse has enemies." People discuss that a woman should plead guilty to a lesser charge (manslaughter or involuntary manslaughter) and that she will hang if she does not. A woman tells another woman, "I will haunt you for the rest of your days." We read that sisters were estranged and that one woman died alone at 67.
► A woman gags and vomits on the ground (we hear her coughing and hear splatter but do not see goo).

- A man pours a drink for a woman (she drinks) and drinks from the bottle himself. Men and women are shown smoking cigarettes in the lobby of a theater and a man smokes in an alley.

- The story of Lizzie Borden was more complicated than it first appeared and involved sexual abuse. 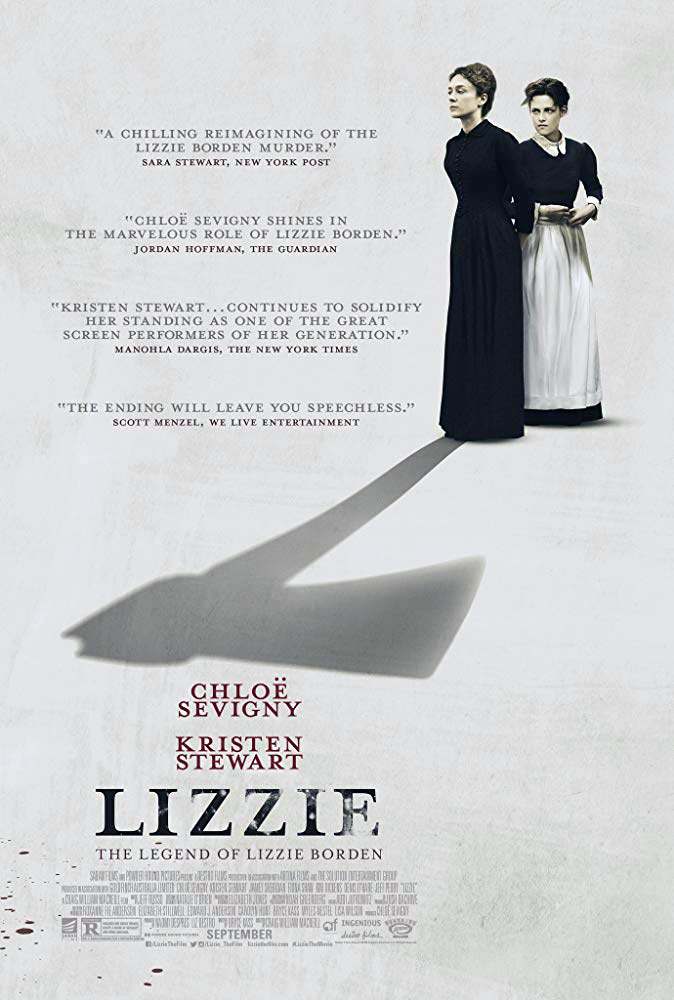