A captain in the United States military (Tom Cruise) who's been disillusioned by the Civil War and the wars against Native Americans, travels to 1876 Japan to help modernize the emperor's army by helping him do away with the samurai who are insisting on maintaining some of their traditional warrior heritage. The tables are turned when the captain is captured by the samurai, and eventually he must decide where his loyalty truly lies. Also with Ken Watanabe, Billy Connolly, Koyuki and Tony Goldwyn. Directed by Edward Zwick. [2:24]

SEX/NUDITY 1 - A woman undresses a man (we see his bare chest), caresses his shoulders, hugs him and dresses him. A man sees a woman bathing (she is covered by a robe with one shoulder exposed). We see several bare-chested men in several scenes.

VIOLENCE/GORE 10 - An extended battle scene shows men on horseback with swords fighting against an army with cannons and Gatling guns; when cannons fire men are thrown in the air, and many men are shot with guns and with flaming arrows. Many men are trapped in a field surrounded by flames, men on horseback charge, many are shot, some horses fall, other riders press on and collide when they reach the other side; some are shot at close range and others are impaled with bayonets. A man is shot in the chest, he slashes the man who shot him, and a man is cut in half from the head down (we see a bloody line down his head and face). A man is shot in the leg and slashed in the throat (blood spurts), a horse is speared, a man is shot in the eye, and a man is shot in the back (he spits blood). Many men are shot repeatedly by a Gatling gun (we see them thrash from the impact), a man is shot in the arm, and a man is hit in the chest by a thrown sword. A man performs ritual suicide by killing himself -- he stabs himself with a sword to the stomach (he moans as the blade goes in and we hear a crunch). Another man also stabs himself in the stomach during a ritual, and a man chops his head off with a sword (we see the head on the ground next to the body).An army loads their weapons and readies for an attack, and the opposing force charges them on horseback: many men are slashed with swords, some are impaled with spears, some men are shot, a man is run through with a spear and then stabbed with a sword, and others are pierced by arrows. During a battle scene a man is rammed and thrown off his horse, he fights with a sword and then with a flagpole against many men, he is stabbed in the shoulder and in the side, he is surrounded by many men with swords drawn, and he falls to the ground where a man stands over him threatening him with a sword. A man is stabbed in the throat and he falls to the ground dead. A man's neck is broken by a ninja-type fighter, others climb across a rooftop and begin shooting many people with arrows, and men draw their swords and fight back -- some men are run through with swords, many fight and we see swords going through bodies and bloodied blades. One man is stabbed in the throat by a thrown sword, two men fight against many men with swords and several are stabbed in the back, one in the eye, and a man is run through. A boy fights a man with a sword (the boy is uninjured). A man fights off many men with swords (in slow motion) and we see blood spray from wounds and we see wounds open and gush; one man's head is cut off and a man is stabbed. A man coughs blood, and a man is shot many times and falls dead (we see bloody holes open on his clothing). A man swings his sword at a man, and nicks his neck. A man remembers (several times and with increasing detail) a scene where women and children are gunned down and slashed with swords: we see them running and screaming, we see blood spurting and gushing when they are hit by bullets, and we see a child lying dead with blood on her face. A man's wound is stitched: we see the open wound and blood and see the needle and thread tugging on the skin). A man shoots at another man, knocking his hat off, trying to get him to shoot back at him. A man describes the scene of Little Big Horn where men's bodies were "stripped, mutilated and left to rot in the sun." A man talks about the "slaughter of many men." A man talks about someone "cutting his tongue out." A man dreams of a battle with many men fighting with swords, and a white tiger snarls and growls. A man loads a gun and shoots several times over the heads of an audience. A man is hit on the back of the legs with a gun and falls to the ground. Two men fight with wooden swords: one man is hit hard in the stomach, then in the hand, then in the face, he is knocked down and has a bloody nose, he is kicked in the stomach, then on the back, and finally he is hit on the head. In another instance, two men fight with wooden swords, one is hit several times, and they end up with swords held at each other's throats. Two boys fight with wooden swords, then one of the boys fights with a man. We see men training with swords and arrows. We see pictures of samurai covered with blood. A man convulses in a couple of scenes and it is suggested that he is suffering from alcohol withdrawal. A man yells at another man and a man spits on a man. A man's pony tail (the "top knot," a samurai symbol) is cut off and he weeps.

SUBSTANCE USE - People are shown drinking alcohol, and one character is represented as an alcoholic.

MESSAGE - The old and the new can work together to make something better. 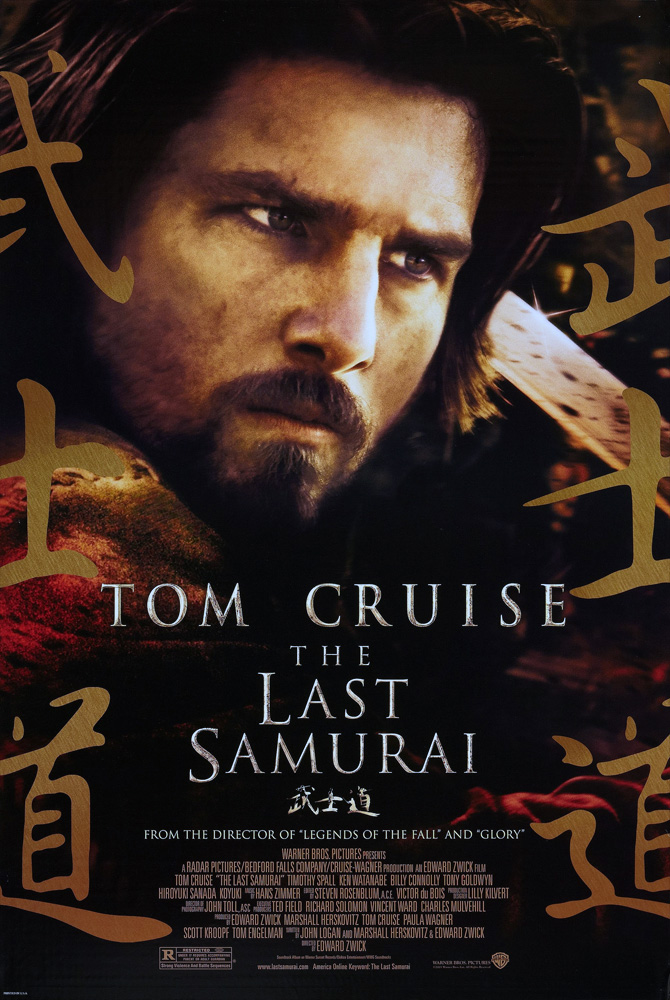