In this film based on the eponymous video game series, Angelina Jolie stars as Lara Croft, a wealthy, sexy and tough adventurer who travels to dangerous and mysterious locales around the globe in search of archaeological treasures. She faces her greatest challenge when she goes after an ancient artifact that will endow whoever possesses it with extraordinary powers. Also with Jon Voight, Daniel Craig, Iain Glen, Mark Colli, Rachel Appleton, Leslie Phillips, Chris Barrie, Richard Johnson, Julian Rhind-Tutt and Noah Taylor. [1:40]

SEX/NUDITY 3 - A woman is seen wrapped in a towel exposing bare shoulders and legs and when she drops the towel we see the sides of her breasts from the back. A woman is seen showering (only her bare shoulders are exposed). A woman wears skin tight outfits throughout the movie emphasizing her unnaturally large breasts. There is some sexual innuendo in a scene where a man is shown showering (we see his silhouette through a glass shower) and when he comes out nude (we only see him to the waist because he is always hidden by something) a woman screams; another woman glances down at his crotch and he makes a remark about needing a cold shower. A woman kisses a man under water (it is not clear, however, whether it is a romantic kiss or she is giving him air). A woman walks on a man's back; we see his bare back. A woman blows a kiss to a man.

VIOLENCE/GORE 6 - A group of heavily armed men crash through the skylights of a house and fire at a woman. A woman attached to a tether flies through the air (as she is being shot at) with a knife in her hand, slashing men and sending them crashing to the ground (we see one dangling from his rope). A woman wraps the rope she is attached to around a man, slams into him and slashes him with a knife. A man is shot several times and falls to the ground dead, a man is shot in the head, two men are stabbed in the chest, and a man is punched in the throat and falls to the ground (presumably dead). We see a knife come out of a man's chest, a man pulls a knife out of his chest, and a woman grabs a knife by the blade and her hand drips blood. A woman shoots several men with a tool of some sort, and a woman is shot at several times. Stone statues become animated and they fight with huge swords killing several people. A man is crushed between two arms of a spinning planetary map, a man is caught under water and we see him drown. A huge, six-armed statue throws six swords at a woman. A flying statue chases a woman, grabs her and carries her some distance before dropping her to the ground. A man and woman fight with kicks, punches and headbutts and they each end up with bloody wounds, and a woman fights with a group of men punching and kicking them. A woman battles a big robot which is fitted with deadly tools and weapons; they kick and punch each other and throw each other around (lots of stone ruins crumble and tumble in the process); she fires her guns at it several times and it pins her to the ground and threatens her with the spinning blade of a saw attachment. A woman cuts the arm of a robot off and then tears some of its wiring out. A robot is pinned under a stone column. A man and woman are thrown through the air by a blast of light. A woman is threatened with guns and knives several times. A woman has a dream and awakens with a start drawing a knife from under her pillow. Animated statues are shot at, kicked and punched and they crumble when they are hit. The story of the destruction of an ancient city is depicted showing its stone walls exploding into powder. A woman breaks down a wall and breaks a clock with a hammer, and a woman jumps on top of a swinging battering ram, swings with it and pokes a liquid-filled globe. A woman riding a motorcycle jumps over a car (while being shot at), and a car flips over and lands on top of another car. A hole opens underneath a woman and she falls and dangles from a vine, a woman dives into a huge waterfall, and a woman jumps off a balcony but is tied to bungee cords; she falls but continues to float and spin. A tomb crumbles shakes and explodes with water crashing through it. A dog barks at and jumps through a light beam, it turns into a skeleton while in the beam, and then turns back to normal. A woman glows and is sucked into a model of the sun. Reckless driving. 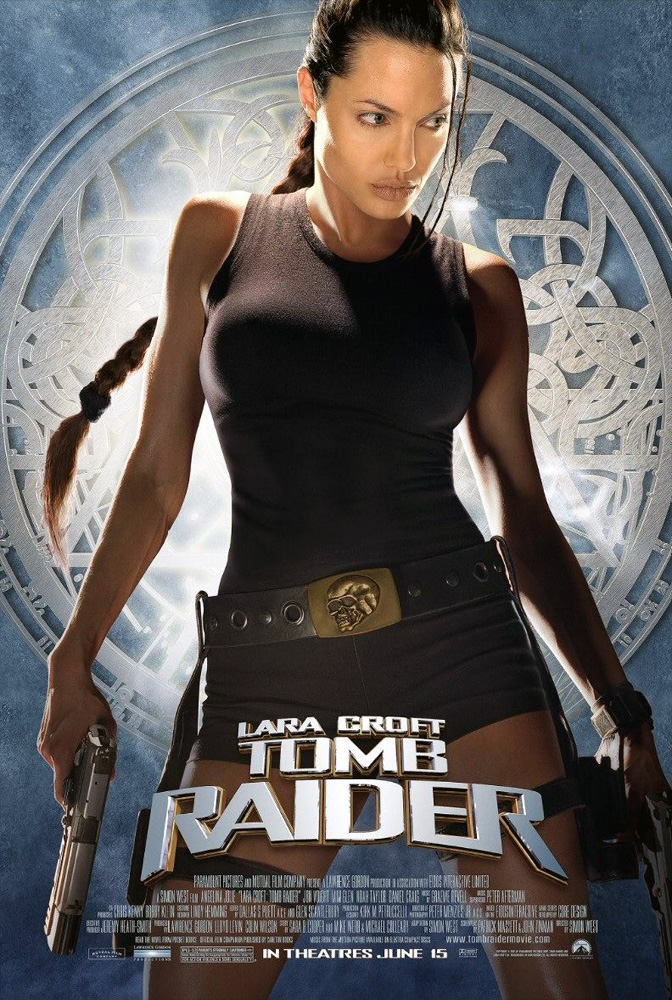