SEX/NUDITY 5 - Two older men sit in hot springs water up to their chins and we can see partial their chest and thighs in an angled shot; a woman with bare shoulders slides into the water and one man leaves the water and the remaining man and woman sit closer and kiss briefly and we later see them clothed and walking to the door of her car as the camera cuts away (sex is suggested).
► A portrait at an art gallery features a nude woman seated, with her legs together and her hands on her knees and lap (no genitals or pubic hair are visible), but an older man says that her "fluffy" (pubic hair) must be good and her nipples are like strawberries (we see bare shoulders, breasts, nipples, arms, partial stomach, navel, hips, thighs and feet). The cover pictures on a book shows several shirtless men wearing knee-length shorts and doing handstands in a circle and we see mostly bare backs, arms, thighs and legs. In a long shot, an elderly man strips to his knee-length shorts and dives into an outdoor pool alone and for a few seconds, we see his bare arms, shoulders, chest and lower legs. A man at a washed-out road removes his jeans and prepares to wade into the water to determine the depth; we see his bare feet and legs up to his briefs. Two older men in long white bathrobes walk past a hot springs pool, where four younger women wearing bikini tops are standing in the water (we see some cleavage) and one woman blows a kiss to the two men; the men walk past the women and to another pool where they drop their robes to reveal knee-length shorts and bare backs.
► An older man takes pictures of a male friend's clothed buttocks that he sticks out and wiggles toward the camera. Two older men dance and do pelvic thrusts; one man dances with a limp branch between his legs, then faces the camera and holds up part of the branch as though it were a limp penis.
► Visiting a geyser about to erupt, one older man tells another that the geyser is like the devil's [sexual reference deleted] and "My pants are already wet!" and calls out, "C'mon stoke me"; later, he says that he does not want to visit a lighthouse, because it is only a hard [anatomical term deleted] without [anatomical term deleted]. An older man tells two younger women that they should wear sheer blouses and very short skirts with tall boots that hug the legs; the women are wearing long-sleeved sweaters and dark tights, wool shorts that end mid-thigh and heavy shoes. An elderly man meets a younger, newly married couple and asks, "How often have you been hitting the mattress in four days?" and he receives no response. An elderly man listens to a younger woman telling a ghost story and when she says a woman invites two lost men into an old mansion, the man says, "A threesome!"; the storyteller says no. We hear that an elderly man went through a divorce and that his ex-brother-in-law became a widower, remarried and divorced his second wife; the second man says that he sees his ex-wife's posts on Facebook about how she hold hands and goes places with her new boyfriend; the first man tells the second man later that the second man's current ex-wife was probably good in bed, but was just filling the man's time and not loving him. A senior citizen tells his male friend in a restaurant that, "[anatomical term deleted] can be like a steak, juicy or dry" and his friend ignores him. An elderly man says that women in Iceland are "hotties" who have granite hard [anatomical term deleted] that move only in a "wishy-washy" way as the women walk and he motions with his hands. An elderly man tells his friend that a younger woman "has the hotties" for him but the friend ignores him. An elderly man asks his friend to name five female celebrities he would like to have sex with and the second man declines, saying he also does not like the first man's list. An older man tells his younger female cousin that her [anatomical term deleted] is so hot, it's on fire; she laughs off the comment.

VIOLENCE/GORE 2 - Two male friends argue at night on a moor in Iceland, lost and unable to see their hotel, even with a full moon and glow sticks; one man spends a few minutes to upbraid the other man about this night sightseeing being a bad idea, gesturing with a green glow stick and they sleep in their coats on the moor.
► Two elderly men bicker throughout the film, with the more sedate man attempting to force his annoying, talkative friend to stop talking so much and spending so much money on activities the other man does not want to do.
► A woman tells a ghost story, which includes the information that a man grows a huge house out of his brain and digests his wife in it, but her ghost appears to passersby, lures them inside, and he digests them as well; an elderly man listening grimaces and calls out, "Oh God!" An elderly man plays horror music chords on an old hotel organ, sneaks into his male friend's hotel room, scares him and says he is freaking out, because, "This place is like a ghoulish place"; the friend tells him to smoke marijuana (please see the Substance Use category for more details) and the scene ends.
► An elderly man serves soup to a male friend and says, "It's so good, it's like angels [scatological term deleted] on your tongue." A retired surgeon states that he will be in the grave with shovels of dirt falling on him, but he will still have his hand out, holding a scalpel and trying to operate. In an art gallery, a man says a T-shirt with some red paint on one corner reminds him of blood; on another wall, we see white lace curtains with rusty red paint applied to look as if it drips from each scalloped edge, suggesting dried blood. An elderly man tells another man that a tennis pro "digs in his [anatomical term deleted]" all the time to release "wedgies."
► In a full-sized bed in a hotel, one older man annoys his male friend by flatulating twice; the second man says it smells bad, and both men laugh.
► On an Icelandic highway, a man propels himself in a sports-wheelchair on the road's shoulder.

SUBSTANCE USE - A man offers a male friend marijuana upon awakening and the friend says that he gave it up in the 1970s, a man smokes marijuana outside by himself, a younger man with a marijuana cigarette approaches two older men and smokes, an elderly man offers marijuana to two younger women and to his older friend but all refuse it, a man becomes frightened in an old hotel and his friend asks him to light a marijuana cigarette which he does and he takes one puff and goes to sleep, an older man takes several puffs from a marijuana cigarette, and a man smokes marijuana alone near his car. Two men pour and drink wine from metal tumblers as the open bottle sits on a table, two men drink large glasses of wine in two restaurants, two men entertain two women at a restaurant and the four people drink three kinds of wine from large glasses, two men and two women attend a dance club where they drink glasses of beer and mixed drinks as they dance and the two men drink glasses of beer as well, a woman becomes very drunk and giggles needing to be carried to a man's hotel room where she sleeps (clothed), several men stand at a bar in a dance club drinking glasses of beer and mixed drinks, each of two men in different scenes drink glasses of wine alone in hotel rooms, a married couple drinks glasses of beer in a hotel lounge area, two men carry but do not drink alcoholic beverages in an art gallery scene (we see a martini and a tall cream drink of some sort), a man in an art gallery says that the navel of a figure connects to an umbilical that supplies shots of Tequila, and two men drink from tall cans of beer in a hotel room and while sitting around a campfire in a later scene. Two men smoke Cuban cigars.

MESSAGE - Senior citizens can still lead hopeful lives as they continue to age. 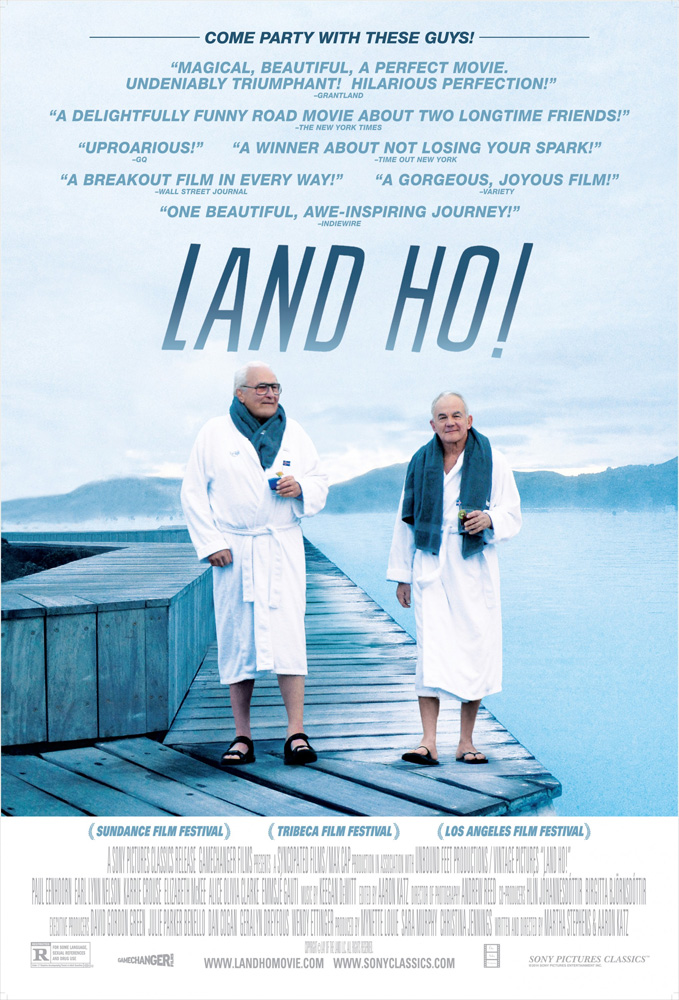