Why is “Land” rated PG-13? The MPAA rating has been assigned for “thematic content, brief strong language, and partial nudity.” The Kids-In-Mind.com evaluation includes a brief sex scene flashback, partial nudity, a near attempted suicide, a woman suffering from hypothermia and starvation, lessons in survival techniques, killing and cleaning animals for food, and encounters with wild animals. Read our parents’ guide below for details on sexual content, violence & strong language. After suffering a devastating loss, a woman (Robin Wright) completely separates herself from people, taking refuge instead in a remote Wyoming cabin while hoping for some sort of solace. Also with Demián Bichir, Sarah Dawn Pledge, Kim Dickens, Warren Christie and Finlay Wojtak-Hissong. Directed by Robin Wright. [Running Time: 1:29]

– A woman sits in a tub filled with water and we see her bare breasts and legs. A woman is discovered unconscious on the floor of a cabin and we see that her flesh is purple and she is suffering from hypothermia; a man and a woman build a fire, undress her (we see her bare shoulders and partial breasts) and cover her with blankets. A woman wears a tank top that reveals cleavage in several scenes. A woman washes herself in a basin and we see her bare back and shoulders.
► A woman remembers having sex with her husband and we see them kissing and caressing each other and hear some rhythmic breathing. A man and woman hold hands to comfort each other.

– A woman hits herself on the head and screams in frustration; she puts the barrel of a rifle under her chin, but does not pull the trigger. A woman goes out in a blizzard tying herself with a rope so as to not lose her way; she retrieves wood, returns to the cabin to find the door is stuck and when she kicks it open she falls to the floor unconscious. A woman is discovered unconscious on the floor of a cabin and we see that her flesh is purple and she is suffering from hypothermia; a man and a woman build a fire and cover her with blankets, and prepare an IV as the woman says, “I don’t think she’s going to make it.”
► Two women argue about one woman’s dealing with her grief and the other pleads with her, “Don’t hurt yourself.” A woman explains to a counselor that she has trouble being around other people, “Because they want me to be better.” A woman throws away her phone and moves to a remote cabin alone. A man tells a woman, “There are better ways to die,” after she nearly died of starvation and exposure. A man introduces his dog to a woman and she says, “I’m a cat person.” A man says that his wife and daughter died in a car accident. A woman becomes upset when she thinks a man has been finding information about her on the Internet. A man says, “I used to drink a lot,” and says that he was driving when his family was killed in a car accident. A woman says that her husband and her son were killed in a random shooting.
► A woman in an outhouse hears snuffling and grunting outside and sees a bear approaching; it pounds on the wall of the outhouse and she is startled, and it goes into her cabin and rustles through her food stores crushing cans and spilling rice on the floor. A woman collects water from a stream in large containers; when she loses her grip on one container, she floats in the stream to retrieve it. Wolves howl and run near a cabin at night. Animals outside a cabin screech and howl at night and something seems to be slamming into the side of the cabin or the roof, startling a woman inside the cabin, as she’s trying to sleep.
► A man lies in a bed with oxygen tubes in his nose and he tells a woman that he has throat cancer (we understand that he dies). A woman eats her last can of food and burns pages from a book to keep warm in a cabin; we see that she is suffering from malnutrition and losing her strength. A woman shakes from weakness when trying to eat and a man feeds her. A man sleeps in his car outside a cabin.
► A woman shoots a deer, a man shows her how to field dress it (we see his bloody hands) and we see her dragging the carcass through woods to her cabin, where she skins and cleans it further. A woman carries a dead rabbit from a trap. A woman takes a rifle to hunt for deer, but cannot shoot. After working outside and chopping wood, a woman has several open blisters on her hands that she wraps with bandages. A woman sets snare traps for small animals and fishes in a stream.
► A woman and a dog walk on an isolated road to a town searching for a man. A woman imagines a young boy hugging her and when she tries to touch him, he is gone. A woman imagines seeing a young boy and a man walking in the woods near her and fishing in the stream where she gathers water and tries to fish.
► A woman opens the door of an outhouse and we hear flies buzzing inside. A woman uses baking soda to brush her teeth when she has no toothpaste.

– A woman prepares an IV for a woman and leaves her in a cabin to recover from hypothermia.

– It’s hard but not impossible to recover from the loss of loved ones. 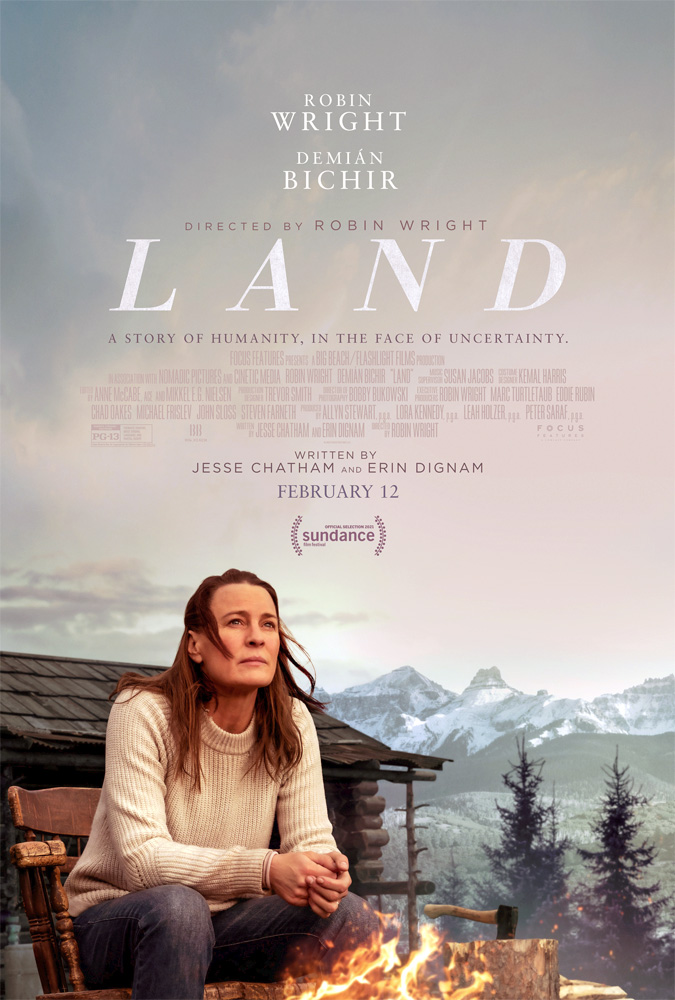