A man (Steve Oedekerk) vows to avenge the murder of his family and after years in the wilderness being raised by rodents he thinks he's ready to face evil kung fu expert Master Pain and settle the score. Footage from the 1976 film "Tiger & Crane Fists" has been used with a new soundtrack and dialogue, and new actors have been woven into the action using blue screen techniques. Also with Jennifer Tung, Tad Horino, Philip Tan and Leo Lee. [1:21]

SEX/NUDITY 4 - A man kisses a woman on the cheek, and a man and woman hug. A woman wears a low-cut top and we see that she has one breast in the center of her chest (it's covered). A woman opens her dress and we see her bra and cleavage, a woman wears a bikini and we see her cleavage, and a woman opens her dress several times and we see her bare back to the hips and then her bare back and panties. Men's bare chests are exposed in several scenes and there are references to their nipples in a few scenes. A man rubs a man's bandaged chest and he moans with pleasure, while the injured man moans in pain. During an aerial fight sequence, one man pulls another man's pants down revealing his boxer shorts. A man and woman fight with their tongues. While practicing martial arts moves, a group of men sings "one of us is wearing a push-up bra."

VIOLENCE/GORE 6 - A man fights a cow: they punch and kick each other; the cow head-butts the man, and pile-drives him into the ground; the cow sprays the man with milk, the man punches, squeezes and bites the cow's utters, and he eventually milks the cow dry. We see the cow lying on the ground shriveled up. A man sets a house on fire and we hear that the family inside was killed. A man, a woman, and a dog, all lie wounded and we watch them die but then they come back to life. A woman sets a man's hands on fire. A man appears at the door of a family's home and hits the father (he falls down to the ground) and tries to kill an infant; the infant fights the man and his two companions with punches and kicks. Two men are stabbed in the back with iron claws, a man is attacked with an iron claw and he's spun in the air and hit in the face (we see a lot of blood on his face), and another man is hit in the back with a claw (we see blood on his back). A man's shirt is torn by a claw, another man is hit in the back with a claw on a string and he's swung around, and another man is hit in the back with a claw and pulled off a rooftop. A man falls on the ground dead. A man's foot spurts blood as he walks (there have been references made to cutting off toes). A baby rolls down a rocky hill and lands hard on a road, and a woman picks the baby up and rolls it down a hill on the other side of the road. A man's arms are rendered useless when he is hit with a "paralyzer" (we do not see an actual weapon). Two men are tossed into a river and they float over a waterfall. A man hits his head against wooden training dummies several times. A man swings a sword at an infant and cuts his diaper which falls down around his ankles and the baby proceeds to urinate on the man's face. There are many fight scenes with one man doing battle with many men: a man spins in the air kicking many men in the face, a man punches a hole through a man's abdomen, a man has ten bloody eyeballs on the tips of his fingers after an encounter with five men, a man runs into a wall when trying to jump over it, and a man is tossed through a door. A woman tries to kick a man several times but is blocked, a man is slammed into a wall and we see a big blood splatter. Two men are shown hanging from a bar by their feet. Two men walk through a street hitting people with sticks and we sometimes see some bloody wounds. A man is pounded repeatedly in the throat, crotch and shins with sticks and he moans, and falls to the ground unconscious; men continue to pound on him. A man is hit repeatedly in the throat, crotch and shins with sticks but is unaffected. A woman hits two men and runs away. Training scenes show men splintering planks of wood and lunging with spears. A man flatulates and we hear a dog whimper, hear a thud and we are told that the dog died (presumably from the flatulence). A man lies in bed with a bandaged chest (there's a small spot of blood on it) and he dies. A man has a bloody nose and mouth, a man has a blood covered bandage on a stump at the bottom of his leg, a man has very bloody hands, a man has blood crusted hands and a woman pours lemon juice, salt and mercury on them. A man has a little face on the tip of his tongue with a mouth and a tongue of its own. A woman acrobatically jumps from a rooftop, lands on the ground, stumbles and falls into a crate that splinters. A man accidentally swallows two moths while he's talking. It is insinuated that two men are punished by having a glove covered fist inserted in their anuses. A man sticks out his tongue, which unravels and wraps itself around a pyramid floating in the sky and yanks on it. We see a flattened squirrel with a handprint into its back (it's still alive). There are many verbal threats of violence. A man has jumper cables attached to his nipples and he's being shocked, a man pulls a large plug out of his abdomen, pyramids fly all around the Eiffel Tower, armies march over a hillside.

MESSAGE - Anybody can make a movie, pretty much about anything -- or nothing. 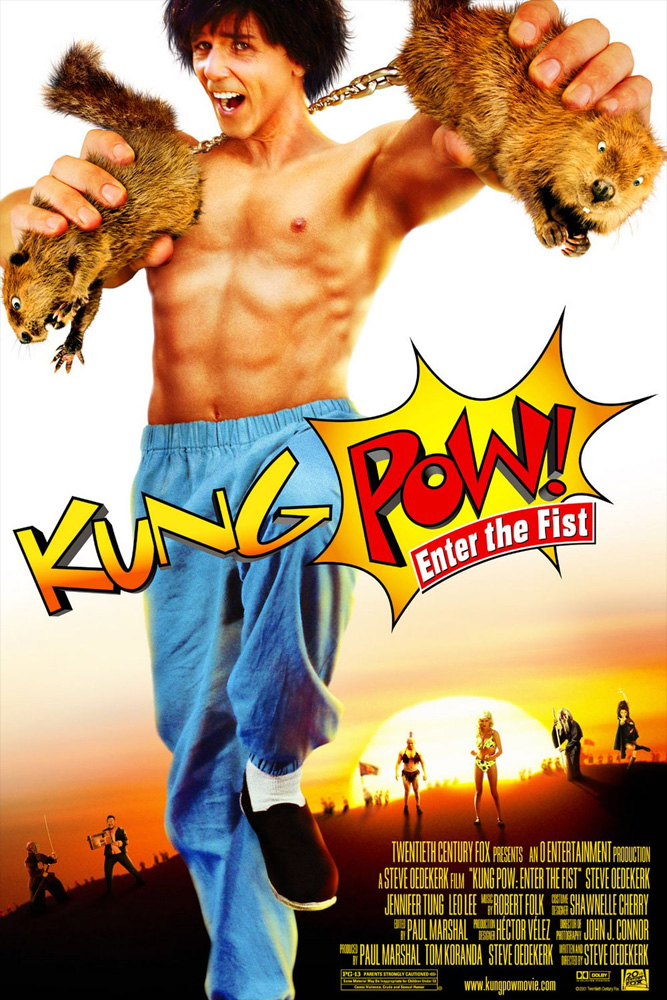