The stepson (Jerry O'Connell) of a Mafia boss (Christopher Walken) is considered a serious disappointment since he has chosen to become a hairdresser -- plus, he has inadvertently led the police to his stepfather. To redeem himself, he does his stepfather's bidding and travels to Australia with his best friend (Anthony Anderson) to deliver a package. But a kangaroo ends up taking off with the package, and they pursue. Also with Estella Warren and Dyan Cannon. [1:34]

SEX/NUDITY 3 - A young woman bathes in a natural pool, in her tank top and panties and we see the outline of her breasts and nipples; a young man joins her in his shorts. Also, a young woman wears shorts that expose her bare thighs and a tank top the reveals the outline of her nipples and her bare abdomen. A beach scene shows people in bathing suits. A young man and a young woman kiss romantically several times. A young man admires a young woman's breasts, touches them and says, "they feel so real." A young man describes a young woman's figure and makes suggestive gestures. A young man misunderstands when another young man tells him to "reach in my pants," and he says, "we all get urges, but..." Two young men are bare-chested and one takes off his pants (we see his underwear) when he is attacked by ants. Two young men hug in what they refer to as an "intimate, non-gay moment." A young man is searched by airport security and we see him bare-chested. A young woman tells a young man that "his testicles will fall off" after drinking something she has given him.

VIOLENCE/GORE 4 - A man shoots at a helicopter, runs away, and then falls to the ground when his legs are wrapped by a bolo. A boy chases a ball into the ocean (we hear about a strong undertow), he flails about and appears to dip under the water when another boy pulls him out onto the beach; he coughs up some water and seems fine. A man is hit in the face with a shotgun butt, and a woman is held around the throat and shoved onto the ground. Two men fight with punches and shoveling -- they're armed with a knife and a gun. A woman's mouth is taped and threatened with a knife, and a man is threatened with a knife and punched in the stomach. Three men come into a camp with guns drawn and threaten two young men and a young woman, a young man is held with a knife to his throat, a young woman is held with a knife to her throat, three people are held at gunpoint, and a man threatens two young men and says "I'll wear your eyeballs like jewelry." A chase scene has three camels chasing a kangaroo, while being chased by a jeep; the men in the jeep fire guns at the people on the camels, the people on the camels throw pots and pans at the men in the jeep, and one of the men in the jeep is knocked out of the vehicle by a tree limb. Eventually, the jeep tips over and slides down a narrow passage, one of the camel riders is thrown over a cliff and dangles from a branch, and then another young man grabs him and helps him back up. A pilot is hit in the neck with a tranquilizer dart and is rendered immobile; the plane flies erratically and crashes (no one is injured). A young man drives a truck recklessly (it's a stolen vehicle full of stolen TVs) while being chased by police; he drives through very busy city streets, he crosses an intersection and is hit by one car that is hit by another car, TVs fall out of the back of the truck and land on the street and sidewalk, and another truck flips on its side dumping its load of fresh fish on top of two police cars and the road. Police chase two young men through a warehouse, the two young men find a chute that they slide through (one is holding his dog when he jumps in) and they splash into water at the other end. We hear a thud and see a kangaroo lying motionless on a road, the young man who hit him tries to pick him up to pull him off the road; the kangaroo regains consciousness and kicks the young man in the face sending him back. In another scene, a young man is also kicked in the face by a kangaroo and he falls back and to the ground. Two men are thrown out of a stopped car, they land hard on the road, and a man takes aim at a kangaroo with a tranquilizer gun. A man flies a plane recklessly and his two passengers scream and yell in fear. A man threatens a young man over the phone by saying "I'll chop you up and feed you to the crocs," a young man talks about a man and that he would "kill us in front of my mother and make her clean it up," and a man talks about fulfilling an execution order. Two young men in a jeep chase a kangaroo across rough terrain; the jeep jumps a few times, and goes through a large field full of termite mounds, goes over a rise and crashes into a stone wall and a boulder lands on the hood. Two young men are blown through the air by a large sandstorm. Dingoes surround two young men snarling and snapping and the two young men talk about being food for the dogs; one says "they're gonna get me like they got that baby." A young man threatens two men with a gun and a young man threatens two men with a rock. A young man practices with a bolo and is wrapped around the neck with it once, a camel is wrapped up once and a tree is hit once. Two young men walk through arid land for some time and begin to experience mirages. A young man is shoved up against a wall and searched by airport security, a man pinches a young man's ear, and a young woman hits a young man in the face with her canteen (we see him with a bruise on his forehead). We hear that a young man's father has died. Two young men shove each other and wrestle on the ground. Two young men are tied by the hands to the back of two camels and dragged through arid terrain. A young man talks about sweeping up pig snouts and guts at his job. A young man and a kangaroo look at each other and scream. A young man puts a spicy jawbreaker in his mouth and complains about the heat, then his friend puts the same jawbreaker in his mouth, and we later see a kangaroo put a similar jawbreaker in his mouth and its eyes bulge and it screams and bounces around. Two young men go into an airplane restroom together and we hear them talking; the people outside think they are talking about bodily functions. Camels flatulate loudly and repeatedly and characters are bothered by the odor, and one time a young man says it was him, not the camel. A kangaroo is bonked in the nose with a yo-yo.

SUBSTANCE USE - People are shown drinking, and one character drinks to the point of intoxication and he passes out on the floor.

MESSAGE - We all have to take responsibility for our actions, our successes and failures. 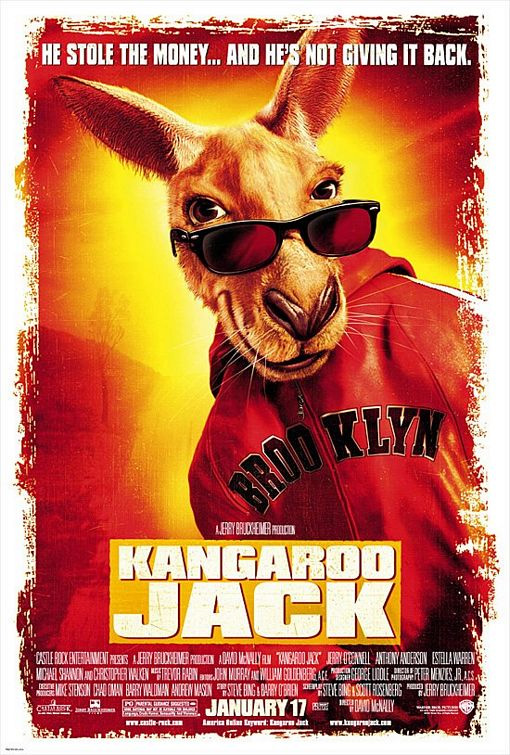