A young boy needs a heart transplant, but his father's insurance won't pay for the operation. The increasingly desperate father (Denzel Washington) takes over the hospital's emergency room and holds everybody there hostage. His demand is to have his son's name placed on the organ transplant list. Also with Robert Duvall, Anne Heche, James Woods and Eddie Griffin. [1:58]

SEX/NUDITY 2 - A woman wears tops that expose some cleavage and in one scene the shape of her nipples is evident. A man is shown with his pants down around his ankles (his legs are the only thing visible). A man and woman hug, and a man and woman hug and kiss.

VIOLENCE/GORE 6 - There is an operating room scene which shows a young boy on a table with a large open, bloody cavity in his chest; a human heart is removed from a plastic bag, placed in the boy's chest cavity and stitched, and we see the exposed heart beating. A dead woman is prepped for organ removal: we see her bare abdomen and a doctor's visor is sprayed with blood as a saw cuts open her chest (the cutting happens off-screen but we hear the buzz of the saw). A woman driving nearly hits an oncoming car while passing another car; she then hits a tractor trailer while trying to pass another tractor trailer, her car spins and stops across a lane of traffic where it is struck by a tractor trailer -- we see the mangled wreckage of her car on the side of the road and see the driver slumped over in the front seat. A man is shot in the arm, the bullet passes through his arm, breaks a window behind him and then he slumps down onto the floor (we see a bloody spot on his shirt sleeve). A man is pulled down from his ceiling perch, beaten in the face by another man (we see him later with bruises and scratches on his face) and his arms and legs are wrapped with tape. We see a man with a very bloody hand (he talks about his finger having to be re-attached), a gunshot victim with a very bloody stomach wound, a woman screams from labor pains (we hear that her baby is in a breech position), a woman with a bruised forehead and eye (we hear that she has been abused by her boyfriend), and a man with scratches on his arm and neck. A girl in a hospital is given last rites and when she dies we hear her mother screaming and see her struggling to hold her one last time. A man holds a gun to his head, and puts a gun in his mouth a few times threatening to kill himself. A man shoves another man, sprays him in the eyes with mace and stabs him in the shoulder with a scalpel; the victim head-butts the aggressor twice in the nose (blood streams out of his nostrils). A woman sprays mace in a man's eyes and kicks him a couple of times in the back and once in the genitals, while yelling at him. A large number of police officers point guns at a man. A man shoves another man against a wall, holds a gun to his neck, and walks through a hospital emergency room threatening patients and staff members with the gun. A boy collapses while running on a baseball field and we see him with his eyes rolled back in his head and he appears to be convulsing. A mother and father's grief is broadcast on national television as they talk over the phone about their dying son. We see a boy in a hospital many times, with tubes in his nose and IVs in his arms, and we hear that he stopped breathing, he has an enlarged heart and that without a heart transplant he will die. A man breaks a security camera and glass falls on the floor. A man yells at the driver of a tow truck who has come to repossess his car, two men yell at each other, a man yells at a man over the phone a couple of times, and a woman yells at her husband a few times during different scenes.

SUBSTANCE USE - A woman is shown smoking a cigarette.

MESSAGE - The current state of medical insurance in the U.S. can lead people to extreme measures in order to get the care they need. 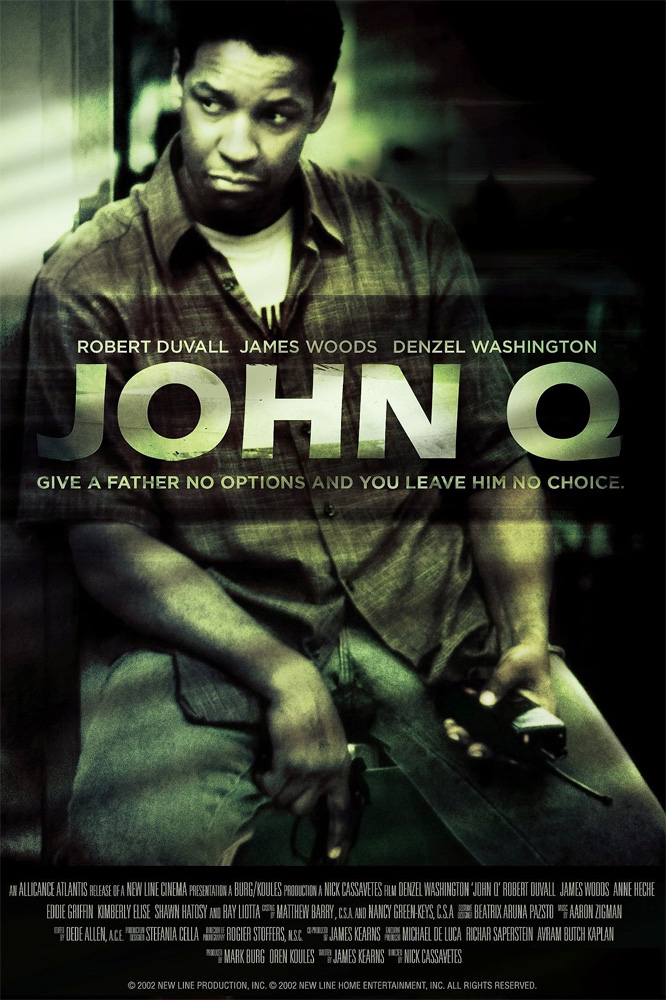