SEX/NUDITY 6 - A fast sequence includes mud-covered nude men rolling in mud (no genitals are seen); the head and nude chest of a woman with large letters and illegible words drawn across her chest, breasts and nipples; a man cutting the groin out of a baby doll and putting a small snake into it; a wild boar running out from between the legs of a prone woman whose thighs, body and head are covered with a sheet; a woman wearing a bikini top, skimpy short-shorts and knee-high boots (we see her bare shoulders, arms, some cleavage, abdomen and thighs). Footage from a 1970s film features three scenes of a seven-year-old boy fully nude except for moccasins (we see his entire front and back including genitals). A woman wearing a thin whitish body suit has feathers covering her breasts and groin area; the outline of her body and breasts are clear. 1970s footage includes a man nude, except for a cloth pocket covering his genitals with a thong reaching through his legs and between his buttocks cheeks and then wrapped around his waist (we see the rest of his fully nude, hairless body in front and back views); the man walks by a pile of over a hundred mannequins dressed in the same attire and the camera cuts to a view of the top of a flat building where half a dozen men dressed the same way stand (we see their bared chests, arms, shoulders, abdomens, thighs and legs). In a still shot from the 1970s, we see a man from the upper chest up, with bare shoulders and chest. Several film and cartoon images feature different men bared from the waist up in front views, showing pectorals and nipples. Film sketches of women wearing futuristic clothing show cleavage and bare abdomens. A man stands apparently nude in a glass case; we see his bare shoulders and the camera cuts to his bared knees and lower legs. An image of a overweight nude emperor shows him so heavy with skin folds that the bulges hide his genitals in a seated position; we see bare shoulders and chest. A movie poster painting features a nude woman lying prone, breasts covered by arms and hips/groin covered by a huge red spot (please see the Violence/Gore category for more details).
► A man states enthusiastically that making an outstanding creative film is "raping the bride"; he repeats this twice more and then adds that this is "raping with love." A man's widow says that he wrote her many love letters. A man says a male artist's girlfriend was sexy.
► We hear that a sci-fi character suffered castration by a bull before his story began and we see a large metal covering over his groin in a drawing along with bare thighs, legs, chest, shoulders and arms; we hear that his wife took a drop of blood and it became semen after it traveled into her vagina, represented by a simple drawing of a red dot moving through a white tube, and reaching her womb; later, we see a comic book version of this story with panels showing a red blood drop on a finger and words about a son of superhuman strength being born as a narrator states that physical love was not required, only spiritual love.

VIOLENCE/GORE 5 - A quick sequence of grainy film close-ups show the faces of each of two men, covered with blood that looks like red paint. We see three dead men lying in a row with their mouths taped with Xs of tape as sparrows fly out of a bloody hole at the heart area of one of the corpses. A hand pulls off a man's goggles, revealing several coiled wires in each eye socket as the man falls off screen.
► A drawing of a sci-fi character features a clown face with a skull hat and skeleton bones attached to his hips and pant legs. Sketches show spaceships breaking up and an astronaut in space whose leg is coming apart at the shin. A drawing of a head and a hand shows a knife in the hand, cutting a man's throat and red blood seeping out; we hear that the bleeding character cannot die, because he is really a part of every human being. A sketch of the hold of a spaceship shows two dead men lying side by side and we hear that they are dead. A sketch shows that a sword cut off the arms of a man at the shoulders, and then the legs at the hips (no blood is drawn). A skull rests on a pile of papers and manuscripts as a paperweight. In several scenes, sculptures and paintings of the creature from the film "Alien" appear; it is black, with a very long skull, blanked eyes, huge gnashing sharp teeth, claws and an insect-reptile body; it sometimes includes many large black tentacles on the head and we hear that the artist's work was a large influence on the film and its monster. A movie poster is a painting of a ghoulish face above a nude woman lying prone and a large spot of blood drips down into the mouth of a ghoulish male below (like a vampire but no fangs are shown). A sketch for a film shows a castle built to look like a man, with a pentagram attached to the groin; we hear that the tongue was to roll out and gather up a landing spaceship and bring it inside; a walkway to the castle included knives all along both sides that we hear were to snap out with the purpose of cutting off the feet of people who were not careful.
► A woman rolls a bowling ball at a running man felling him like a bowling pin; another woman runs to the man and whips him with a bullwhip (we hear loud smacking sounds). We see a martial arts instructor practicing with nunchucks and a sketch of a man in a jumping sidekick.
► A filmmaker states that he needs to find spiritual warriors in order to make a film and that making it is a fight. We hear that officials banned a film from the 1970s in Mexico City because it frightened people and caused them to riot, stampeding out of theaters. We hear that a man received hard training daily in martial arts and its weapons for many months in order to make a film. A man's father says that he felt as if he sacrificed his son's life for the film, working him so hard, but good things in life are about sacrifice. A man writes a note to a famous surrealist artist on a Tarot image of the Hanged Man; the artist agrees to be in a film, but wants a burning giraffe (we do not see one) and we hear that the artist is destructive and will try to destroy a film project. An artist says that when he heard a certain rock group perform, he felt like Christ on the cross, implying that he felt his life was fulfilled. A colleague states that a director was humiliated and hurt long-term, because his film failed to be shot, owing to its big budget; the director raises his voice in anger, stating that he made it into an oversize graphic novel and that the huge book of film sketches can be animated now, even if he dies; he says that it will be better than the film done without him. We hear that a man defecates a "golden turd" and see a large gold nugget in a glass case of water; later, we hear that a long mural over a bar in a restaurant is dedicated to the "fart" with various monks in the depiction making smirking faces.

SUBSTANCE USE - A man says that an LSD hallucination is a manifestation of the drug's goal to produce a prophet through altered perception, a man speaks of a spice called " Mélange" (French for "mixture," often of incongruous things) in the book and film "Dune," a man says that LSD expands the mind creatively, a man states that a male colleague gave him "special marijuana" and after smoking it for a while the first man suddenly saw a Mandala around his colleague's head that seemed to radiate outwards and then disappear, and we hear that an actor swallowed a whole kilo-sized bottle of Vitamin E capsules. A man sips a few times from a small glass of wine during and interview and later, an old photo depicts a man and a woman holding glasses of wine, a man states that a famous actor drank six bottles of wine at dinner, a man sits in a bar where tables in the background hold several beer bottles (could be full or empty), and a small group of liquor bottles are shown on a long back bar. A man smokes a cigarette on a sidewalk, a man holds a cigarette while seated on his bed in a photograph and smoke is visible in a large swirl extending away from the cigarette.

MESSAGE - Have all the ambition that you can muster and keep pursuing your dreams. 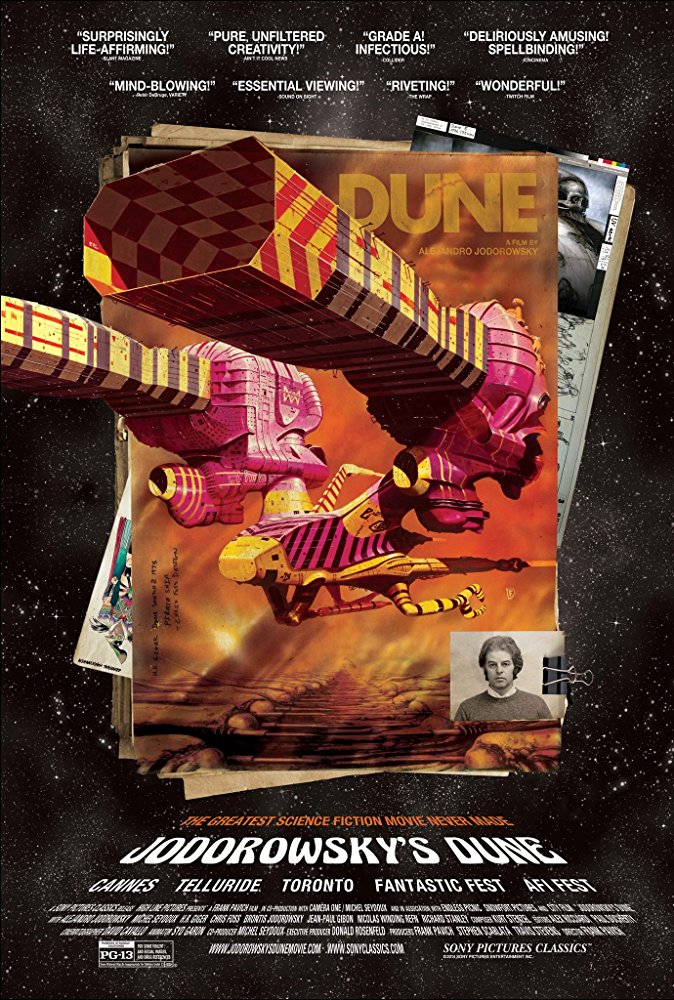