Why is “Jingle Jangle: A Christmas Journey” rated PG? The MPAA rating has been assigned for “some thematic elements and peril.” The Kids-In-Mind.com evaluation includes a brief kiss, and several flirting and attempted seduction scenes, several scenes showing children undertaking risky and dangerous activities and one scene includes a warehouse fire that they must escape, the death of a woman, and arguments and a slap to a hand. Read our parents’ guide below for details on sexual content, violence & strong language. A combination of animated and live action holiday tale about a genius 19th century toy maker (Forest Whitaker) that loses hope after his apprentice steals his schematics, his wife dies, and his daughter (Anika Noni Rose) leaves him. Years later, his young granddaughter arrives, bringing with her the magic of both science and Christmas. Also with Keegan Michael Keys, Phylicia Rashad, Hugh Bonneville and Ricky Martin. A few phrases are spoken in Spanish without translation. [Running Time: 1:59]

– A man and a woman kiss briefly as their young daughter rolls her eyes. A man holds mistletoe over a woman’s head and kisses her on one cheek; she sings a song about smiling and happiness. A man kisses another man on one cheek, platonically.
► A widow flirts with a widower by smiling, standing close to him, and singing in a gravelly, growling voice about smiling; she wears a vest that she pulls off like an exotic dancer while writhing slightly (she is still dressed and no nudity is seen). A woman holds out some mistletoe and a man ignores her. A woman rubs a man’s hand and smiles, but he pushes her away. A woman asks a man for a hug and he ignores her. A man in a shop holds a woman so she won’t fall after she throws herself at him and another man enters the room and says some people are so desperate they will sell anything.

– A young girl and young boy chase men into a warehouse where a crusher machine makes loud noise, and the children steal a crate containing a robot; a lantern sets packing straw on fire, fire fills the screen and four men shout and cannot enter the room, while a giant fireball chases the kids into a tunnel, where they push the crate toward a large fan at one end and a man yells to them to dodge the blades as the robot comes to life to extend two cable arms that scratch the tunnel loudly to slow them down as they slide in slow motion; the fireball just misses the head of the boy, as the children and the crate break through the fan blades (the fire dies to a couple of short flames and the broken fan is charred, but the children are OK), and the robot is in pieces, but a man and a girl fix it. A man tries to persuade a young girl into giving him a one-of-a-kind robot, but she refuses, so he approaches a young boy working in a toyshop, ties him to a table leg, and steals the robot.
► A husband, his wife and daughter are shown as animated dolls when the woman collapses in the street; the man catches her and their young daughter watches; the scene cuts to the woman’s tombstone in a dark cemetery (also animated).
► A gyroscope flies over a crowd until it sputters smoke and sticks onto a screaming man’s face (there’s no injury) and its inventor shouts in anger; no one is harmed, but an animated doll says to the inventor later, “Well, maybe next time someone will lose an eye,” and the inventor shouts in anger. A flying gyroscope crashes in front of a crowd and they snicker and leave a town square. A machine spins parts and coughs smoke and mists and then breaks. A toy-maker is sad after his toy plans are stolen and he is unable to make a living.
► A machine distills a drop of clear liquid that is placed into the back of a matador doll, making it come to life to brag incessantly about himself; he says things like, “The bulls look at me and slay themselves.” A matador doll manipulates an apprentice into stealing plans for toys; the apprentice grows up to be rich, but runs out of blueprints and the doll taunts him. Three flames in a fireplace change into dancing humanoid figures. Several live action scenes change into small animated dolls of the same people for several seconds, and then change back to live action.
► Two police officers grab a man as another man accuses him of theft, but when the second man is proven a liar, the officers take him away instead; the man’s animated bragging doll begs the first man to take him and he picks the doll up and flips its off-switch. Girls and boys bump into two men who grunt, a man bumps into a boy, and a preteen boy hits his head on a table in four scenes, grunts, but is unharmed. A matador doll slaps a man in the nose in two scenes and slaps himself in the face in a later scene. A robot becomes animated when a gearbox is installed, flying and briefly levitating a young girl and a young boy in two scenes, and the children and an old man in another scene. A young girl dances on a second story ledge outside in the winter. A street scene includes a man and a young girl hitting each other with snowballs that make curve balls, etc. according to mathematical equations; other children join in, followed by men and women and the scene ends when a police officer is struck in the face with a snowball (there’s no injury). A man looks afraid and we hear his heart beating loudly. Two men use hammers to beat time to music on tables.
► We see a brief close-up of an animatronic beetle with large jaws, and CGI glass butterflies flying toward the camera. A woman blows stardust from a book that has moving gears on most pages. A lab table holds bubbling liquids of several colors. A woman, a boy and a girl (about 10-years-old) float out a second story window with a flying robot.
► A woman says her husband is dead. A woman tells someone off-screen that while driving her new truck, she “almost killed only one person today.” Two men argue for several seconds. A man and a woman argue in a few scenes and once she slaps his hand for ignoring her. A man and a young girl argue three times, and the man shouts in two scenes. A boy and a girl argue in a few scenes. A man and his adult daughter argue, reconcile, and cry in each other’s arms. A young boy says that he does not want to die because he has not hit puberty yet (he is afraid of an animated robot).

– A man pours a glass of cloudy pinkish liquid from a carafe and sips it once, and another man holds a champagne glass of clear liquid and raises it halfway to his mouth.

– You can create your own world, because anything is possible when you believe and you decide to overcome obstacles. 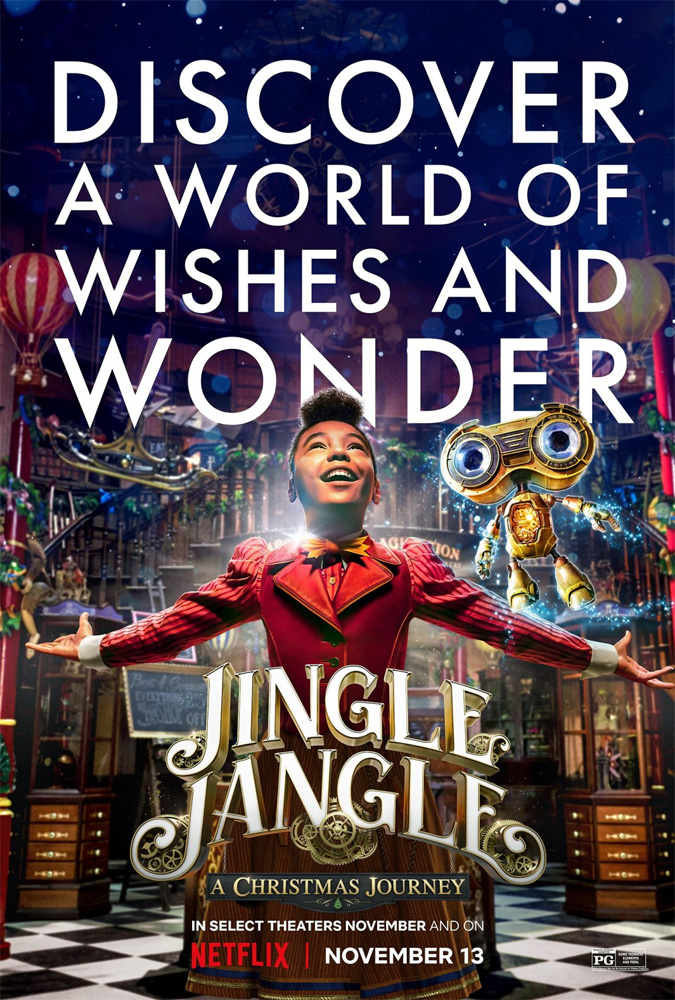