The Gulf War plays out in the burning oil fields of Saudi Arabia as we see how the young soldiers who fought on the ground suffered from fear, monotony and heat. We watch a battalion of Marine scout snipers whose mission it is to protect the oil fields. Each man confronts his demons along the way, while trying to remain sane through sardonic humor. "Jarhead" is a nickname for the Marines. With Jake Gyllenhaal, Peter Sarsgaard, Jamie Foxx, Lucas Black and Chris Cooper. Directed by Sam Mendes. [1:55]

SEX/NUDITY 8 - Soldiers watch a video of a man and woman having sex (the man thrusts from behind the woman, who is on her hands and knees and we see their bare buttocks and legs); one of the soldiers realizes the woman is his wife.
► A young man and a young woman have sex: we see his bare back, buttocks and legs as he thrusts, and we see her bare legs.
► A man and a woman have sex: they lie on a bed, the man is bare-chested, and they kiss and caress each other (a voice-over talks about when a young man was conceived).
► Soldiers begin taking off their clothes (we see their bare chests) and pretend to be having sex (we see one thrusting from behind another and we see one pretending to be performing oral sex on another).
► A soldier in the distance dances with his pants down around his ankles and we see his genitals, bare chest and legs. Many soldiers shower in an open shower room, and we see their bare chests and buttocks, and the silhouette of their genitals. A young woman's bare breasts are visible when she is putting on a T-shirt after a love making sequence. A soldier wears a G-string with a Santa hat covering his genitals and he dances in front of a room full of other soldiers. Several soldiers are shown bare-chested and wearing boxer shorts.
► A soldier masturbates in a bathroom stall and we hear rhythmic breathing and see his shoulder moving as he looks at a photograph of his girlfriend.
► Soldiers ogle photos of the girlfriend of one of them, one grabs his crotch and says he'll think of her later, and others talk about the fact that she is probably with someone else at that point in time.
► A soldier makes a sexual gesture with his fingers and tongue as a woman in a car passes by. A young man rubs his face in the clothed chest of a woman who's sitting on his lap. A soldier tries to seduce a flight attendant using references to parts of his anatomy; she rebuffs him.
► A soldier writes a love letter for his commanding officer's wife and it includes graphic sexual references. A commanding officer yells at a recruit, repeatedly using many insults including asking him if he is "in love with him" and if he is "gay"; he also asks about his girlfriend and says that someone else "is having sex with her right now."

VIOLENCE/GORE 7 - Soldiers crawl through mud during a training exercise with other soldiers, firing their guns over their heads as bombs explode around them; one soldier panics, stands up and he's accidentally shot (we see a bloody hole in the back of his helmet and we see blood on his face).
► Two soldiers approach a third soldier who is being secretive, and we see the soldier with a mutilated corpse that he apparently has been "playing" with; he says that he put something in its mouth (one of the soldiers covers the corpse and pulls it away to bury it).
► Soldiers come upon a road strewn with burned out and bombed out vehicles, as well as the charred remains of many people (a soldier vomits when he sees them); some are missing limbs.
► Planes fly over soldiers marching on the ground, and the planes turn and fly back while shooting at the soldiers; a truck is hit, it explodes and the driver climbs out while in flames.
► Several soldiers hold one soldier down on the floor, and another approaches him with a hot piece of metal; we see the soldier wriggle, hear him yell, we see smoke and hear a sizzle when he is branded on the leg. Two soldiers fight, and one is held down on the floor by several soldiers and his leg is branded (we see skin turn red and bloody and hear a sizzle). Another soldier is held down after a struggle (the soldier ends up with a bloody nose), his hands are taped to a bed frame and it is implied that he is also branded but he was not -- the other soldiers were playing a game with him.
► A soldier runs through bombs exploding around him in order to retrieve a battery for a radio. Bombs explode around many soldiers in the desert: they hide in trenches, one stands outside, others yell for him to get down but he does not, and he looks down and realizes that he has urinated in his pants. A soldier accidentally sets a cloth on fire and the fire spreads to crates of flares that ignite and fly into the sky. Planes fly over a site where commanding officers of the enemy army are supposed to have been, and we see explosions destroy the building were they were to have been. Oil wells burn.
► A soldier threatens to kill another soldier: he holds a gun to his face and forces him to recite a pledge, then he turns the gun on himself and tries to force the soldier to pull the trigger.
► We see a photograph of a child with a badly burned face (presumably from a biological agent). A soldier is hit in the face by a paint ball pellet. A soldier gets oil in his eyes when the oil rains down on him; he screams and says it burns and that he can't see. A dead man lies in a coffin.
► A commanding officer yells at a recruit, grabs him around the throat, slaps him on the back of the head repeatedly, and then slams his head into a chalkboard when he talks back to him. Two soldiers are assigned a sniper mission: they reach their destination, one soldier takes aim at a man's head, but they are stopped by an officer which upsets the soldiers, who become belligerent and one lunges at the officer.
► Soldiers patrol the desert, they hear gunshots and see several people walking toward them; one soldier approaches them, a man and the soldier talk, and the man tries to grab the soldier's rifle, while explaining that someone shot his camels. Two soldiers walk though a dark desert, they approach a ridge, they hear screaming on the other side, they see gas masks hanging on the ends of shovels that stick out of the sand, and they ready their weapons but see their fellow soldiers celebrating. Soldiers watch "Apocalypse Now" and cheer while watching scenes of people being gunned down or bombed.
► Soldiers take target practice using their rifles and soldiers fire their weapons in the air to celebrate. Soldiers are ordered to pile sandbags in pouring rain, then un-pile them. A drill is called and soldiers struggle to get gas masks and protective suits on in an acceptable amount of time (their commanding officer tells them that if this were real they would have all died). Soldiers are ordered to play football while wearing protective chemical suits in blazing desert sun; soldiers are also ordered to run a long distance while wearing gas masks and protective chemical suits in blazing desert sun.
► Soldiers play football, several are tackled, one is flipped in the air, and another is hit in the head with the ball. Two soldiers fight while playing football, by shoving each other to the ground and trying to punch each other.
► A soldier removes tubs of urine and feces from outhouses, pours gasoline on them, and then sets them on fire while stirring them. A soldier vomits after drinking a lot of water (he was ostensibly cleaning alcohol out of his system). Several soldiers stand on a ridge and urinate (we see the stream of urine). A soldier dreams that he vomits a stream of sand. A soldier sits on a toilet and he has apparently been there for some time.
► A horse with no rider approaches a soldier in the desert; the horse appears unwell and is covered with oil. Soldiers watch two scorpions fight: one is held and the other stings it twice killing it.
► A commanding officer yells at a recruit repeatedly using many insults (please see the Sex/Nudity category for more details).

MESSAGE - War is futile and all wars are an exercise in insanity. War changes people. 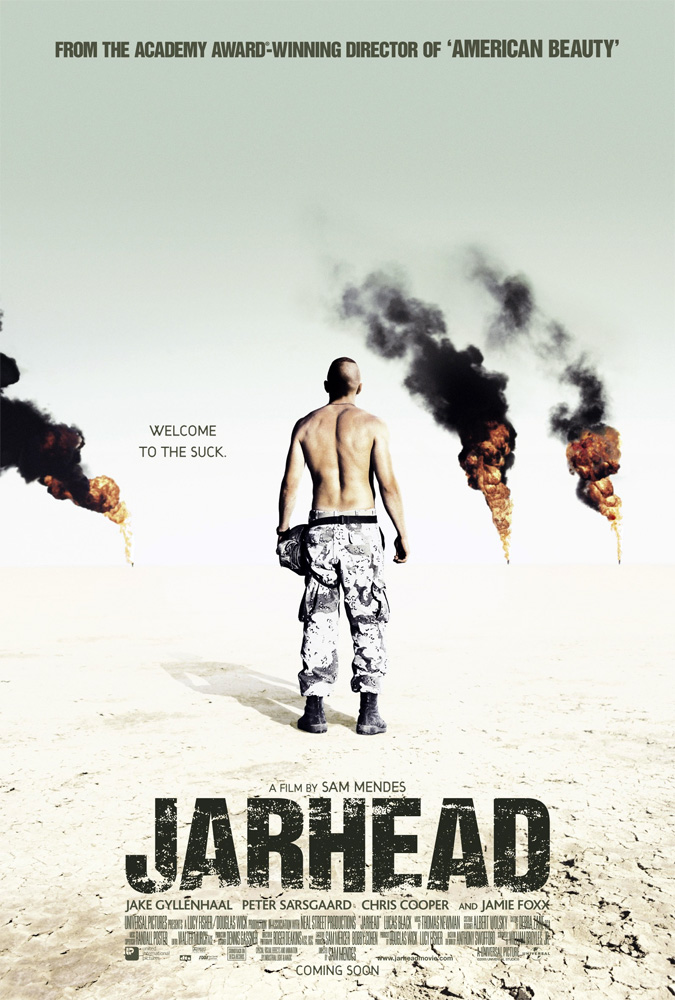