After being divorced for ten years, a woman (Meryl Streep) has an affair with her now married (Alec Baldwin) former husband. This has repercussions for the budding romance with her architect (Steve Martin), as well as for her three grown children, and she has to sort through confusing emotions. Also with John Krasinski, Lake Bell, Caitlin Fitzgerald, Hunter Parrish, Mary Kay Place, Rita Wilson and Zoe Kazan. Directed by Nancy Meyers. [1:58]

VIOLENCE/GORE 2 - A man passes out and falls to the floor, a doctor is summoned and later questions him about his meds (Lipitor, baby aspirin and Flomax); the man talks about having to take a certain drug or he'd "pee forty times a day" and the side effect of sperm reduction is discussed.
► A woman talks to a plastic surgeon about her "saggy eyelid" to which the doctor says to remove the excess skin she needs a brow lift and he describes the procedure, including details about cutting the hairline and pulling the skin back over the skull, and stapling it in place over the ears.
► A man peeks into a woman's kitchen window at night, watches her for a moment, then loses his footing and falls to the ground. A woman throws a jacket at a man's face.
► A vagina-plasty is mentioned, to which a woman says, "ouch." A boy is referred to as a lunatic child and a woman is referred to as a lunatic and nuts a few times; a man is described as having lost his mind. A woman tells another woman that she's lucky her husband is dead, because she doesn't have to run into him. Women talk about hating another woman. We hear a conversation about scars on a woman's hand and learn they were caused by cooking hot caramel (we don't see the scars).
► Adult children cry, say they are still getting over their parents' divorce, and mention feeling confused and betrayed. A woman, feeling humiliated, cries, and a man's grown children see him crying. A man jokes about crying for ten hours.
► A woman, hung-over, says she's dizzy, vomits into a nightstand drawer, and later into a toilet (we hear her crying and retching sounds, but don't see goo). A man who has choked on his food while kissing a woman, says he didn't mean to spit on her.
► A woman having a heated discussion with a man and preparing food, chops off a cooked chicken leg with a cleaver-like kitchen knife; another man cautiously takes the knife away from her.

SUBSTANCE USE - A man asks a woman, "Do you remember when we used to smoke pot?" and he pulls out a joint that he's brought and tells her to take a few hits (it is obvious later that she smoked it when she appears under the influence), a woman asks her date if he smokes pot and holds up a joint just as a police car is driving by, a woman shares a joint with her date who takes a big hit (partygoers nearby ask, "Who's got the reefer?") and a few scenes in the party feature the couple high and giggling, a woman tells a man, "I'm stoned," the expression "smoking weed" and "care for a toke" are used, three adults convene in a bathroom and share a joint (one man takes a hit off the joint while another man inhales his exhalation and a man tries to suppress a cough after smoking), and a man comments that he's not "stoned" anymore. A man and a woman order several drinks at a bar and become increasingly drunk, they laugh and dance and end up having sex with each other, a woman wakes up with a hangover and vomits, a woman slurs her words, a reference is made to "drunken sex," champagne is served and toasted with at a party and at a restaurant, a group of women drink wine at a dinner party, a woman orders a martini at a bar, wine is consumed with meals in several scenes, we hear, "Is no one drinking wine, but me?," a woman watches a couple dancing and comments that they must be "hammered," a young woman is surprised a man remembers something from the night before since he was so drunk, and a comment is made about people on the road drinking. A man passes out and falls to the floor, a doctor is summoned, and later questions him about his meds (Lipitor, baby aspirin and Flomax).

MESSAGE - The end of a marriage doesn't necessarily mean the end of a relationship, and although it may be complicated, it can be worth it. 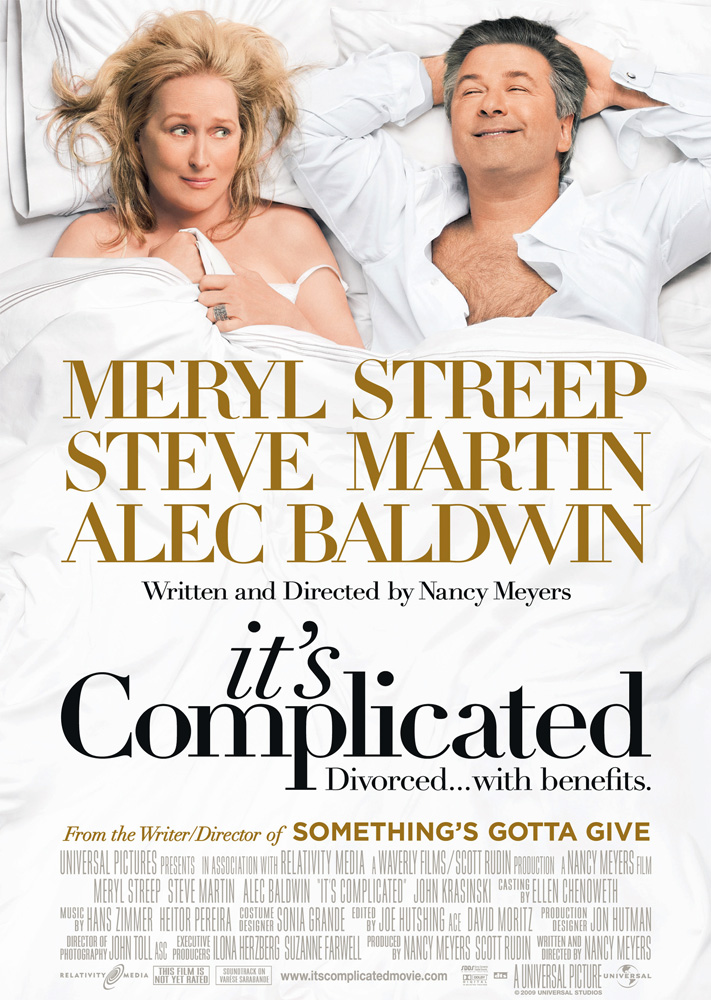