A depiction of the brutal massacre of the Tutsis at the hands of the Hutu militias in Rwanda during 1994, that left almost 1 million people dead. Despite round-the-clock cable news channels and the Internet, the genocide went almost unnoticed in the western media. Don Cheadle stars as an ordinary man who managed to save over 1,000 Rwandan refugees. Also with Djimon Hounsou, Nick Nolte, Joaquin Phoenix and Sophie Okonedo. Directed by Terry George. [1:50]

SEX/NUDITY 4 - Women are held behind a fenced-in area and are stripped of their clothing: bare breasts and buttocks are evident. A woman's bare breast is exposed while her baby nurses. A man and wife lie in bed kissing tenderly and talking. Also a husband and his wife kiss several times, and a husband and his wife lie in bed together and talk. A man and a woman flirt, and a man kisses a woman on the cheeks. Men and women are shown around a swimming pool wearing bathing suits that reveal bare chests on the men and cleavage, abdomens and legs on the women. Women wear low-cut tops that reveal cleavage.

VIOLENCE/GORE 7 - A videotape shows many people being hacked and murdered with machetes, and we hear them screaming and watch them fall to the ground after several blows. A truck drives along a fog-covered road, the road gets very bumpy and the driver assumes he has gone off the road; another man gets out of the truck, stumbles on mounds of dead bodies (we see their blood-covered clothing), and the man vomits -- we see bodies covering the roadway far into the distance. A grenade is fired into a hotel, many people are injured and we see dust and rubble. A truck full of people is ambushed by many people with machetes, a man is thrown off the truck, men are beaten, a man is slashed, and a man holds a machete to a woman's throat. A large group of men comes out of a tree-covered area and threatens to attack a truck full of refugees; another group of men shoots at them (some are hit and killed while others run away). A truck full of people with machetes threaten soldiers, they throw a bloody helmet on the ground (implying that the person who had been wearing it is dead) and we hear that many men have been murdered -- we read that nearly 1 million people were killed during these events. A truck full of people passes refugees leaving a city and there are many dead bodies along the road; a woman mourns over a man's body, and houses are burned. A soldier tells a man to shoot his family and holds a gun to his head. A soldier fires weapons in the air over a large group of people, the people drop to the ground in fear. A man drives along a road where houses burn, people run screaming and many bodies lie in yards and roadside with blood surrounding them. Women are held behind a fenced-in area, they are stripped of their clothing and beaten. A wounded man falls to the ground with blood on his head (his ear has been cut off and we see him later with a bloody bandage). A man holds a gun to a sleeping man's head. Soldiers hit a man in the face, then hit him in the face with the butt of a gun, then knock him to the ground and kick him repeatedly, and a woman screams as the soldiers take the man away in a truck. A man finds his young son terrified and hiding in shrubs with blood on his shirt, the man rushes him into their house, lays the boy on a table, and opens his clothing looking for a wound (there is no wound). A man is grabbed and men threaten to kill him. Soldiers shoot guns in the air as a threat. People with machetes push and shove other people out of a hotel. A man tells his wife to take their children and jump off a roof if he is captured or killed. We see an overturned truck and we presume that the driver has been killed. A truck full of people drives away, a man stays behind and his family (which is in the truck) screams and cries in protest. People are separated (nuns holding orphaned children, men and women), and some Rwandans are forced to remain behind fearing death, while others are taken away on a bus. We hear a report that a plane has been shot out of the sky and there are no survivors (a high-ranking political official was onboard). People in a truck drive along streets where houses are in flames, and people run and scream in fear. A bottle breaks near the window of the truck and the man is startled. We hear a radio show where people refer to another group of people as insects and that they should be destroyed and we hear an order to rise up and kill them all. Two men yell at each other and one man threatens the other with a gun. A man comes home to find his house dark, and his wife and several neighbors hiding in the bedroom. A woman talks about having been forced to watch men murder young children. People talk about children being killed to "end the bloodlines." A frightened boy enters his house and tells his parents that there are soldiers in the street. A crate breaks open on a floor spilling out many machetes (people who see it appear anxious about it). We hear that people were separated based on the color of their skin and the width of their noses. People are rousted out of their homes by soldiers. A man throws a bucket of ice on a man and yells at him.

MESSAGE - In the face of unspeakable atrocities we can sometimes muster the courage to help those around us. 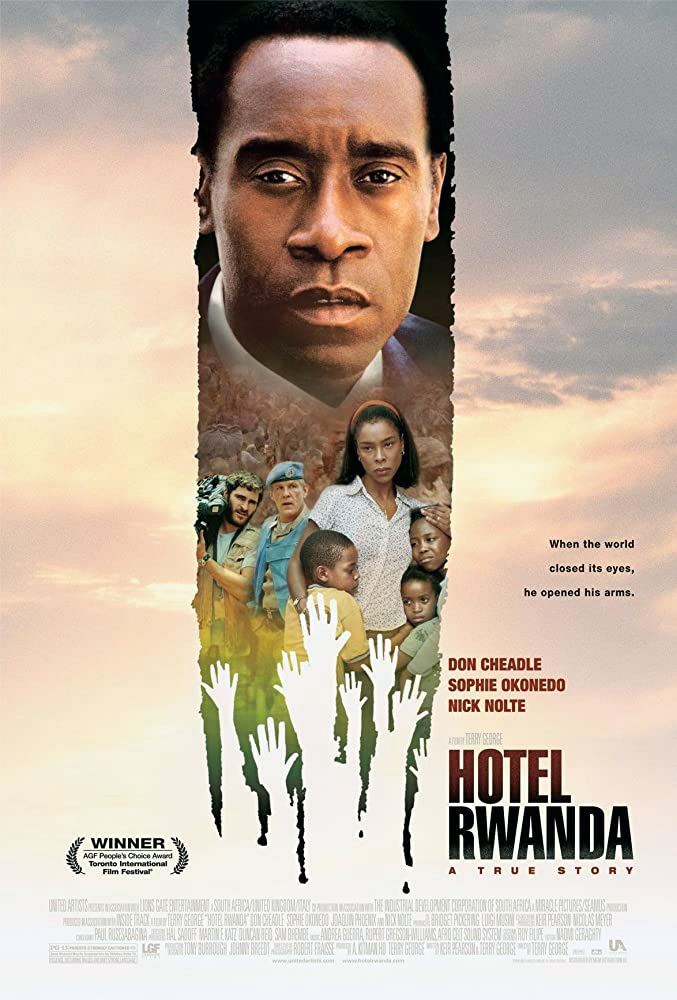