After 27 years a wife (Meryl Streep) decides that she wants to revive her marriage and enrolls herself and her husband (Tommy Lee Jones) for an intensive couple's counseling session. Her husband protests, but eventually relents and their journey teaches them whether their marriage is really worth saving. Also with Steve Carell, Jean Smart, Ben Rappaport and Marin Ireland. Directed by David Frankel. [1:40]

SEX/NUDITY 7 - A husband and his wife kiss while in bed, he moves on top of her and he thrusts and she moans. A husband and wife watch a movie in a theater, the wife caresses the husband's thigh, she moves onto her knees and unfastens his pants, and it is implied that she is trying to perform oral sex on him; he flinches a few times and spills his popcorn and she gets up and storms out of the theater. A wife sits on her knees and unfastens her husband's pants, she prepares to perform oral sex on him, he kisses her and they sit back on the floor and continue to kiss; he caresses her thigh and lifts her dress (we see a bit of bare leg), they lie on the floor, he thrusts briefly, they moan and they stop (they are both still fully clothed). A husband kisses his wife passionately, she leans back across a kitchen counter and wraps her leg around his hip, and they stop and he leaves.
► A woman in bed wearing a nightgown caresses her own breast (we see movement under covers) and it is implied that she is masturbating (we hear her moan sexually). A husband lies on a bed and his wife (both are fully clothed) caresses him on the arm and chest, then on the legs, moving up toward his crotch and across his crotch; he appears to be getting aroused and then stops her and leaves the room. A husband and his wife, both wearing pajamas, get into bed together and awkwardly hold each other.
► A wife reads a book and looks at a bunch of bananas seeming to be preparing to practice oral sex techniques (she ends up eating the banana). A woman holds a tube of prepared cookie dough in a grocery store and squeezes it suggestively.
► A wife wearing a low-cut nightgown that reveals cleavage, bare back and shoulders enters a bedroom where her husband is reading in bed (he is wearing pajamas); she stands and looks and looks at him seductively trying to communicate desire and when he understands why she is there, he says that he doesn't feel well and she leaves the room. A wife pulls off her robe (we see her wearing a nightgown that reveals the outline of her nipples) while sitting on a bed and seems to be inviting her husband to join her (he does not). A woman wears a low-cut dress that reveals cleavage. A woman wears a low-cut top that reveals cleavage.
► A husband and his wife on a TV show kiss passionately. A husband kisses his wife on the cheek.
► A husband and his wife talks about a time when they had sex and describe how and when. A husband talks about a fantasy of having his wife perform oral sex on him at the office under his desk. A husband talks about a fantasy of having sex with his wife and another woman. A man asks a woman if she masturbates. A man asks another man if he got aroused when his wife was caressing him. A man asks a husband and his wife if they perform oral sex on each other. A man asks a husband and his wife "When did you last have sex?" A man asks a husband and his wife, "What was the best sex you ever had?" A man asks a husband and his wife to talk about their sexual history and their fantasy life in several scenes. A man talks about sex toys and sex games. A husband complains about talking about sex with a counselor. A counselor asks a couple about what position they would use for sex. A wife talks to a marriage counselor about her husband and says, "He used to touch me. I don't touch him, he doesn't like it" and "there's nothing holding us together." A wife says of her husband that he wants "it" (meaning sex) not her. A husband talks about watching "a little porn." A wife says that her husband would "rub up against me." A woman in a bar asks many men in the establishment, "Who here is not having sex?" and several men raise their hands. A woman in a bookstore looks at books about sex and relationship advice books. A husband and his wife sleep in separate rooms. Two men talk about relationships. A husband says to his wife, "Is this a hormonal thing?" A man says of his wife "She was pretty. She was very pretty." A man talks about how people "forget how to want each other." A woman asks for a book in a bookstore titled "Sex Tips For Straight Women From Gay Men."

SUBSTANCE USE - People are shown drinking alcohol in a bar, and a man opens a champagne bottle and pours two glasses (he takes a sip).

MESSAGE - Marriages are a lot of work and can be worth working to save and improve. 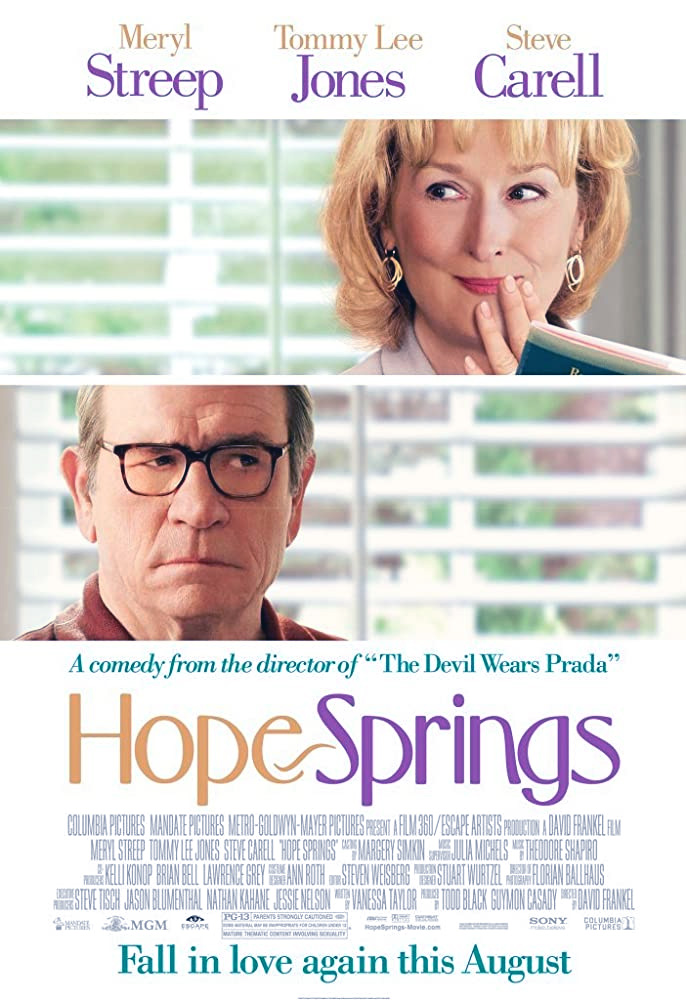