Why is “Honest Thief” rated PG-13? The MPAA rating has been assigned for “strong violence, crude references and brief strong language.” The Kids-In-Mind.com evaluation includes a couple of kissing and hugging scenes, several scenes of car chases, shootings and fistfights that end in injuries or deaths with bloody wounds shown, a house explodes with no injuries caused, and at least 1 F-word and other strong language. Read our parents’ guide below for details on sexual content, violence & strong language. When a notorious, yet non-violent bank robber (Liam Neeson) falls in love, he decides to give himself up and return all the stolen cash. However, after two rogue FBI agents (Jai Courtney and Anthony Ramos) steal the money and attack his girlfriend (Kate Walsh), the former thief decides to use his special set of skills to pursue justice. Also with Jeffrey Donovan and Robert Patrick. Directed by Mark Williams. [Running Time: 1:39]

– A man cocks a gun and lays it on a bed in a hotel room while he and another man argue; he holds another gun on the man and another man enters the room and seems suspicious until the man with the gun shoots him in the chest (he falls dead with blood on his shirt) and he and the other man fight, crash through a window and fall two floors to an overhang, then to the ground below (they both have blood on their faces) and they get up and run, with one shooting at the other. A man holds another man while holding a gun on another man, and the gunman shoots the man he’s holding in the back several times while pushing him toward the other man (we see several bloody bullet wounds on the dead man and the other man has a bloody wound on his side); the remaining two men shoot at each other, as one runs out and speeds away in a car.
► A man enters a shop and locks the door behind him, he seems threatening to a woman inside and when the woman tries to get out, he slams her into the door, and throws her against a shelf; she stabs him in the leg with a pair of scissors (we see blood), she hits him in the face with a stapler, and he slams her into a counter knocking her unconscious (and seemingly dead), and then holds a gun toward her but does not shoot (we see blood on her face). A man in a van reverses fast into a car and the bumpers become stuck together until he manages to pull away, one of the men in the car shoots at him and he shoots back (no one is struck). A man with a gun drawn follows another man into a church, the second man disarms him and they fight briefly (we hear bones crunch) before talking and the second man walks away. A man hits another man with a baseball bat, pins him against a wall and hits him in the abdomen with the bat while threatening him for information. A woman is shown in a hospital with a bruise on her face.
► A man’s house explodes as he runs out the front door and he is thrown; he drives away leaving the house burning. A man tells another man that he has planted a bomb under his car seat and that it is very unstable; the driver stops his car and a bomb squad is shown working on disarming the explosive.
► Police chase a man driving a van and they speed through traffic in city streets until another car T-bones the police car and disables it. A man is shown robbing a bank and using drilling equipment (we see sparks) to make holes in the vault door and using explosives to open it (we see a flash and hear a blast). Two men in a car chase a man and a woman in another car; they hide in another car in a parking garage and the man hotwires the car after the other two men drive away. A man breaks into an empty house and he and a woman walk through it.
► We hear gunshots on a recording and hear someone talking about killing someone. A man says that another man is going to kill a woman. Two men argue about stealing money in a few scenes and one acts threateningly toward the other. A woman yells at her ex-husband over the phone about the dog that he was granted in the divorce settlement and he hangs up on her. We hear reports of a string of bank robberies over several years (12 banks in 7 states over 8 years). A woman talks about having “baggage.” A man talks about his father’s health deteriorating after his mother died and that his boss embezzled his pension; the man eventually committed suicide by driving his car into a tree. A man talks about his military experience being minesweeping.

– A man takes an unidentified prescription pill. A woman holds and drinks from an open bottle of champagne.

– Love can prompt honesty in thieves, but don’t assume all law enforcement officers are equally honest. 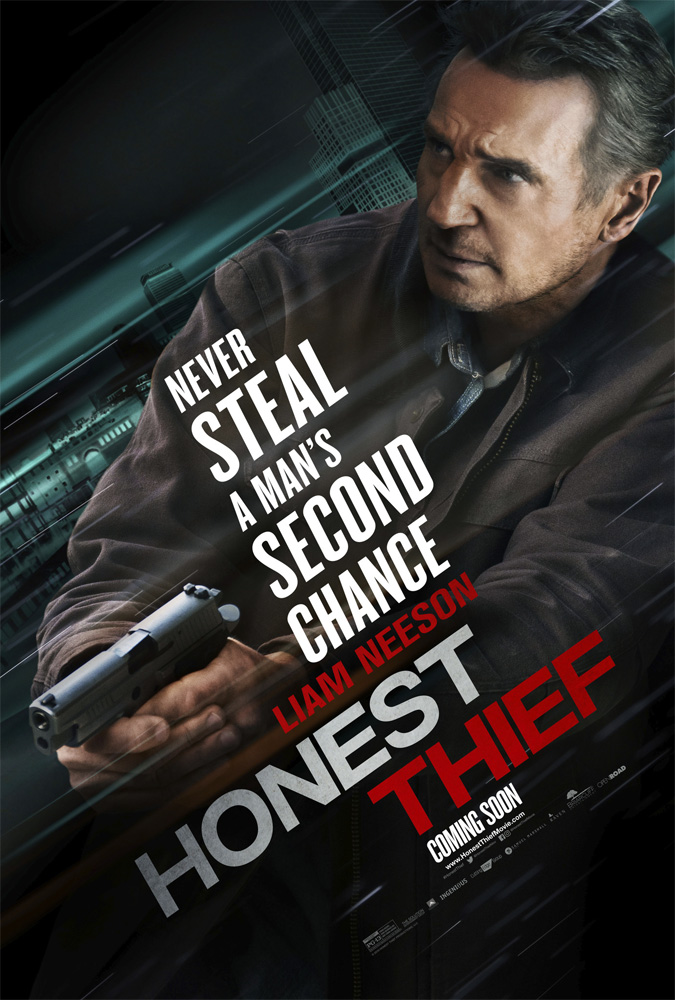