Sci-fi comedy, based on Douglas Adams's irreverent BBC radio show and book, with Martin Freeman as Earthman Arthur Dent, who hitchhikes across the galaxy after the Earth is destroyed in order to make room for a hyperspace bypass. Dent's companions include a depressed robot, a couple of aliens (Mos Def and Sam Rockwell) one of whom is remarkably dim-witted and an Earthwoman (Zooey Deschanel) Dent is in love with. Together they try to find the meaning of life. Also with Stephen Fry, Alan Rickman, John Malkovich, Helen Mirren and Bill Nighy. Directed by Garth Jennings. [1:50]

SEX/NUDITY 2 - A man and woman kiss a couple of times, and a man and a woman are seen flirting at a costume party. We see a woman and a man wearing very short pants and another woman in a short skirt. We see a woman showering and she is later wrapped in a towel (we see her bare shoulders). There's a reference to a man and a woman exchanging underwear, and we see a silhouette cartoon of a woman losing her underwear. Another silhouette cartoon shows a man milking a cow, and he panics when he understands that the cow is in love with him (a heart symbol floats above them). There's a reference to an alien having "two of everything."

VIOLENCE/GORE 4 - Some alien species look gross (very corpulent, with disgusting, discolored teeth and huge, fleshy lips). One white, furry alien has sharp teeth. A human-looking alien has two heads (one is on top of the other, and he keeps flipping one back to reveal the other one) and apparently four arms and other extra appendages. Another human-looking alien has a torso resting on metallic spider-like legs and when he takes his myopia eyeglasses off he has two black smudges instead of eyes (his eyes are apparently embedded in his glasses).
► A two-headed alien has one head removed and held as a hostage: In shadow, we see a saw, hear buzzing and then see one head removed; we then see the removed head on the body of a doll (it's alive and talking, but upset) while the alien with the other head looks fine except for a rather bloody bandage around his throat. A man is strapped onto a chair and is told that his "brain is needed"; we see a saw approaching him, as well as a device with a spike coming toward his forehead, and he yells but manages to escape unscathed.
► We see the Earth blowing up: aliens warn the population, we hear people panicking, running scared, huge spikes are dropped on the planet, covering it, and an explosion follows. We also see a house being demolished in another scene.
► Two thermonuclear missiles are shot toward a spaceship and they follow it for a while. Many aliens shoot lasers en masse toward humans, on several occasions, but don't manage to hit them; they do however strike a robot on the back of the head (we see the resulting hole surrounded by scorch marks) and the robot falls down, seems to have expired, but comes back to life, stands up and shoots the aliens with a gun that makes them feel depressed. The aliens fall down and are then stuffed in a paddy wagon and taken away.
► Two men are tied with strips of white tape, from head to toe, inside a space ship; an alien threatens them with either forcing them to listen to very bad poetry or being thrown into space, the men are frightened and one of them seems to be in pain when the poetry is read.
► A man smashes two talking white mice and we then see that they were tiny aliens (they look like children but they're supposed to be ancient); they look totally flattened (there's no blood or gore). A man tries to put a small wiggling fish in another man's ear (it's a language translating fish).
► A man punches another man in a couple of instances, and one time gives him a slightly bloody lip. One man hits and slaps himself repeatedly. While on an alien planet several men are attacked and smacked by instantly appearing and disappearing very large flyswatter-looking things -- they are smacked repeatedly, on the head and body, as they run away. A sleepy man knocks his head on stairs.
► A woman in chains is lowered into a cage where we're told an alien animal is going to devour her; she's pulled out again and she appears fine except for her pants that are shredded. A woman is thrown out of a door and onto the floor.
► Crabs are crushed: A crab is hit with a hammer-like utensil and splinters into small pieces, and another crab is apparently crushed when a spaceship he's holding onto takes off. A whale falls toward the surface of a planet, and thinks the ground is a greeting friend coming toward it; when it crashes we see a mushroom cloud rise from the ground; a pot of petunias also falls from the sky.
► A man threatens another man with pulling "your spleen out of your throat" and there's a reference to someone gnawing his legs off. There are instances of flatulence and men eating disgustingly and talking with a full, open mouths. In one scene a doll made of cloth throws up yarn.

SUBSTANCE USE - A man orders six pints of ale, and guzzles a couple, while in a pub; other pub patrons are shown drinking. A man brings a shopping trolley full of cans of lager to a construction site and distributes the drinks to the workmen. Two aliens consume an alien cocktail that's very powerful and they react with instant inebriated pleasure.

DISCUSSION TOPICS - The meaning of life, meaninglessness, the end of life on Earth, really bad poetry, the universe, alien lifeforms, friendship, falling in love, starting over.

MESSAGE - Life may have no meaning, or the meaning could be "42," or at least we may never be able to know what it is or it may seem too absurd, or it may be that we're asking the wrong question and it's simply finding someone to love. Towels are remarkably useful artifacts. 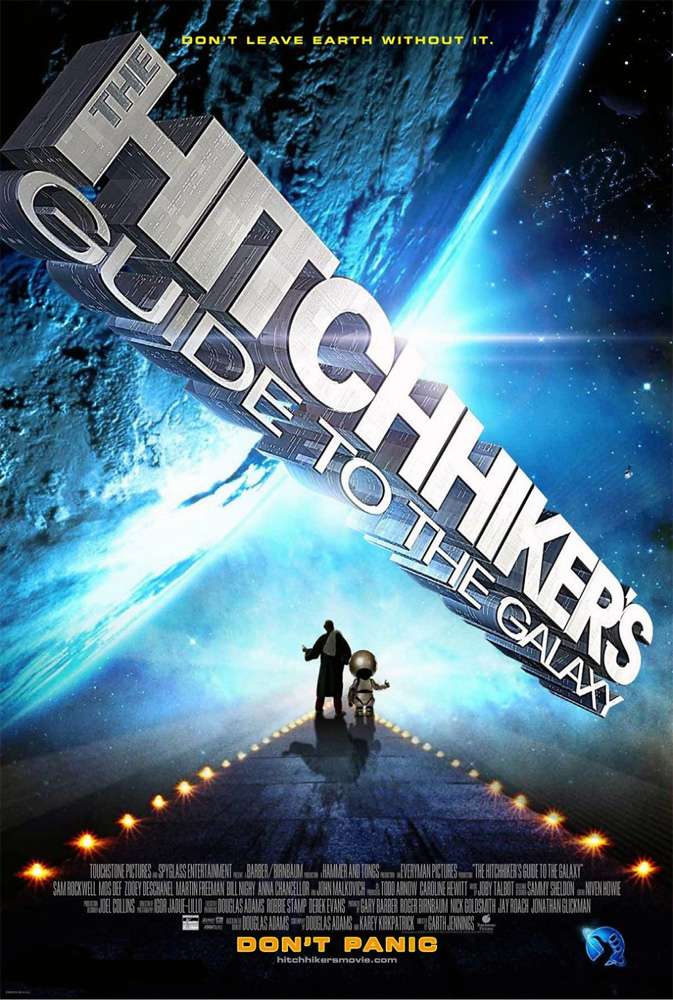