A young couple is driving to a lake resort for spring break, when they pick up a hitchhiker (Sean Bean). The stranger seems trustworthy enough, but their trip turns into a nightmare when he attempts to kill them. While they manage to get away, they keep running into him and the bloody wake he leaves behind. Also with Sophia Bush, Zachary Knighton, Kyle Davis and Neal McDonough. Directed by Dave Meyers. [1:23]

VIOLENCE/GORE 8 - A young man is chained by the wrists and the ankles between two trucks, and a man in the truck revs the engine and the young man is pulled several times; he screams and we see blood on his wrists, and the man steps on the gas and the young man is torn in half (we see the body separate and blood and matter spray).
► A young man finds a car with several murdered people inside, including children (we see the legs of a child, blood splattered on seats, and a stuffed animal): a woman has a large bloody wound on her throat and a man has a bloody knife in his chest (we see blood spurting as the man is moved into the back seat, and the man twitches, spits blood and dies).
► A man slashes a police officer's throat with a handcuff (we see the bloody wound spurt blood), and then shoots another officer in the head (blood spurts and sprays); a third officer swerves the car they are in, and it flips several times.
► A young man is pushed to the ground and handcuffed by a police officer, a young woman holds a gun on a police officer and another man shoots the officer in the head (we see the bloody bullet hole and the man falls to the ground).
► A young woman finds a man dead, with his throat slashed (a lot of blood is on the body and the floor) and another man with an enormous, bloody gunshot wound in his head (we see sticky, bloody matter on the back of his head); a dog licks the wound.
► A young woman shoots a man in the back, then in the chest and then in the head (we see blood splatter out of his head as he falls and we see his bloody face while he lies in a puddle of blood). A man shoots a man in the head (we see the bloody bullet hole in his head and blood splatters on a window behind him).
► A man shoots a man driving in a car (blood splatters on window), the car swerves, flips and crashes into another car that flips too, and another car slams into the side of the last car, forcing it to flip also. A man shoots at a helicopter and strikes the pilot (blood spurts on the windshield).
► A man grabs a young woman around the neck and slams her against a bed several times; she strikes him on the head with a telephone, and she gets away from him and locks herself in a bathroom.
► A young man who's driving slams on the bakes, forcing a passenger to slam into the windshield; the young man then kicks the man repeatedly until he is pushed out of the car and onto the road (we see the man with a bloody wound on his forehead).
► A young man and a young woman speed in a car while being chased by police cars and a helicopter, and the police shoot the tires out.
► A car slams into another car and spins out of control (a young woman inside is OK and the other passenger is pinned by the legs). A man grabs a young woman and locks her inside a van, he shoots a puddle of gasoline under the van and it bursts into flames (the young woman gets out before burning).
► A truck rams into the back of a car repeatedly. A car nearly runs into a man who's standing in the road, and it swerves to miss him. A car is nearly struck head-on by a truck, the car swerves and drives off the road, it crashes and a tree breaks through the windshield (the two inside are OK). A car crashes in front of a young man and a young woman who are walking.
► A hare is run over by a car (we hear a splat and see blood and matter and the bloody remains on the road).
► A man uses blood on his finger to draw the outline of a young woman on a mirror. A man breaks his own thumb and squeezes his hand out of handcuffs (the cuffs cut his skin and blood pours).
► A man holds a knife to the throat of a young man and tells him to say, "I want to die." A man grabs a young woman and holds a switchblade to her face and pushes it against her skin, close to her eye. A young woman holds a gun to a man's head but does not fire. A man pulls a young man's head against the bars of a jail cell and threatens him. A young man and a young woman are shoved around and handcuffed by police. A young man has a nightmare that a man broke through his car window and grabbed him around the throat. A police officer squeezes handcuffs tight around a man's wrists (he winces).
► Two dogs bark and jump against a fence, which a young man and a young woman are trying to climb. A scorpion skitters toward a young man's foot.
► A man breaks a cell phone and plays with a switchblade. We read that 42,000 people die in highway accidents each year. Alfred Hitchcock's "The Birds" is shown playing on a TV.
► A large bug splatters on the windshield of a car (we see green goo smear as the wipers smudge it). A young man and a young woman talk about her having to urinate. 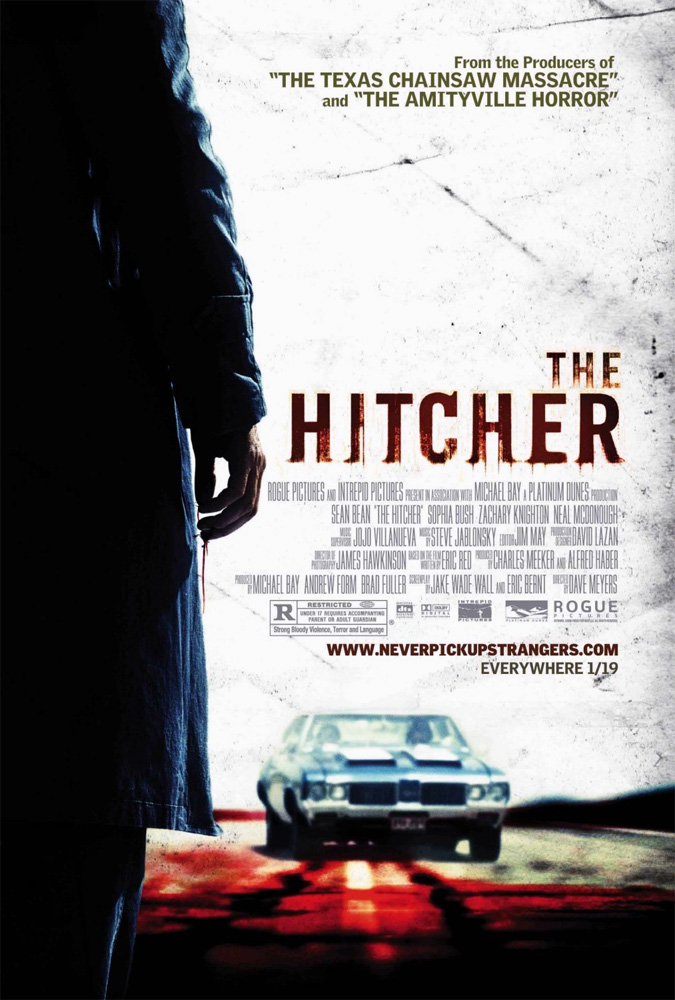