Lindsay Lohan stars as a college graduate headed to NY for her first job. What she doesn't realize is that her heart is still in car racing, and she finds the perfect car when she meets Herbie, a 1963 Volkswagen Beetle with a mind of his own. Also with Justin Long, Breckin Meyer, Matt Dillon and Michael Keaton. Directed by Angela Robinson. [1:32]

VIOLENCE/GORE 3 - A car is parked in the middle of a demolition derby ring and several other cars race toward it and crash into it; the car is crumpled and twisted but not destroyed. A young woman walks through a demolition derby ring, cars swerve and crash near her, and a monster truck (with large fangs over its grill and snorting smoke through its nose) rears up and crashes down nearly hitting her and a car; the truck chases the young woman and the car, they drive over a ramp, and they land on the back of a truck, whereupon it collapses.
► Two cars race, one rams the other, the car spins out, and then speeds up to catch the other car, it spins around on its bumper to avoid being rammed again, and then drives along a guardrail. A car rams another car against a wall and sparks fly, and another car crashes and flips on its side, and then on its roof.
► During a race a car crashes into a wall, spins out and the driver climbs out of the car and falls onto the roadway. During a race a car is trapped between four other cars, the car speeds up and climbs over the lead car and gets back onto the roadway. During a race a car rides on the bumper of another car then slingshots off and around it.
► During a race a car crashes against a wall, spins and smokes (we see the driver in the hospital and hear that he may have temporarily lost depth perception). A man punches a camera that's filming him, and presumably the cameraperson behind it (we hear glass breaking).
► A car blows exhaust fumes at a man leaving him with soot on his face; the same car flings one of its hubcaps at the same man hitting him in the back of the head, and then it spurts oil onto the man's shoe. A man peeks under the hood of a car, the car slams its hood down on the man's head twice, and it spurts oil on him; the man hits the car with a crowbar, and the trunk lid hits the man in the face and knocks him to the ground.
► Two men try to pull a car off of a truck bed, the car resists, and then it drives off; one man falls as the car drives on a ramp over him, the man holds onto a chain attached to the car's bumper and is pulled along behind the car (he seems fine).
► A man is launched out of the driver's seat of a car, and he crashes down onto people sitting in an audience. A young man trips and falls knocking his head on a box of car parts on the floor. A man walks into a wall.
► A car does a wheelie as it drives along a busy street. A car drives fast along a country road with a young woman inside, while she's trying to stop it; it speeds toward a young man working underneath another car and stops just short of running over him.
► A car hits a young man in the buttocks with its door. A car spurts oil on a young woman's top, and a car sprays windshield wiper fluid in a man's face. A car scrapes its side mirror along another car, making an awful noise and damaging the other car's paint. In a racing clip reel we see a car go over a hill and into water (we see it beginning to sink); the same car crashes into hay bales in a different race.
► A car is lifted up on a forklift, the car whimpers and honks, a large crane comes toward the car, the car quivers and flaps its doors, and it is lifted into the air and dropped on top of another car, crushing it. A car whimpers and looks sad when it is towed away.
► A horror movie shows a woman being chased by a skeleton. A man yells, appears to be having a breakdown, and is taken away in an ambulance. A man says, "I'm going to exterminate this bug" (referring to a VW beetle). A man threatens to crush a car.

SUBSTANCE USE - People are shown drinking in the background while in a restaurant.

MESSAGE - Don't allow one failure to stop you from trying again. Parents can be overprotective. Women can race cars as well as men. 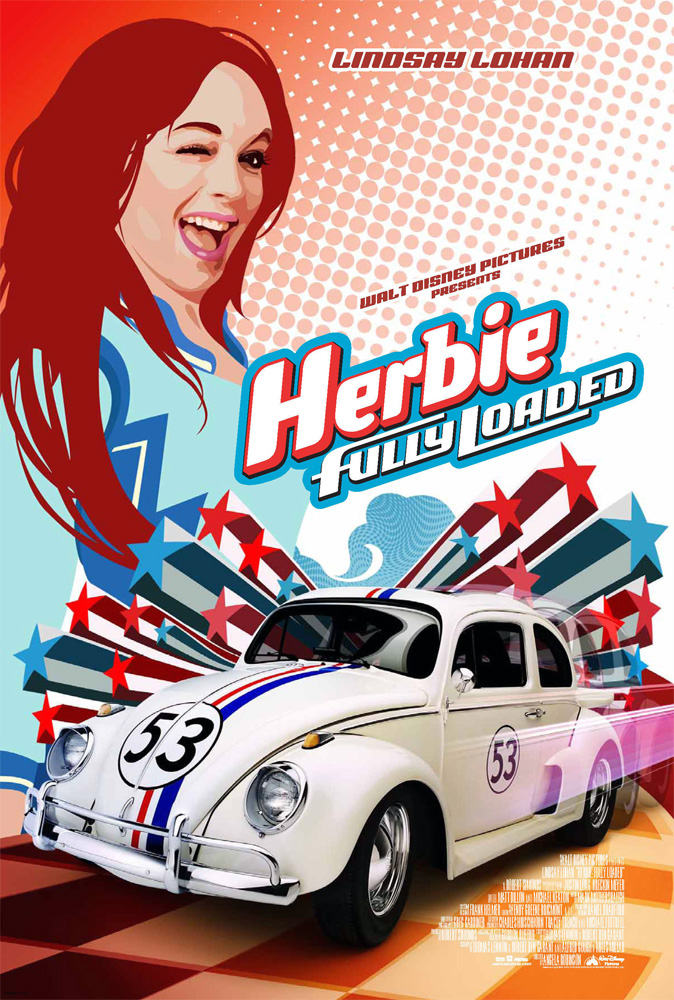