Adaptation of the eponymous best-seller: A 4-year-old (Connor Corum), the son of a preacher (Greg Kinnear), claims to have visited Heaven while under anesthesia for an appendectomy and to have met Jesus and dead relatives. His parents and their Nebraska town try to find meaning from his experiences. Also with Kelly Reilly, Jacob Vargas, Lane Styles, Nancy Sorel, Margo Martindale and Thomas Haden Church. Directed by Randall Wallace. [1:40]

SEX/NUDITY 2 - Several women wear dresses or blouses that reveal a small amount of cleavage. A woman wears a short skirt that bares her legs. A woman wears a thin cover-up garment over a bikini top and skirted bottom; we see some cleavage; she wears this loose garment and bathing suit again as she jogs away from the camera in her yard, revealing partial bare buttocks. A man and a woman lie in bed side by side; he is seen wearing a T-shirt and she wears an opaque gown.
► A husband and his wife kiss briefly at home and for a prolonged time on their patio.
► A woman says that she will do something in order to get a vacation and whispers in her husband's ear; he replies, "Now?" and they walk to the house (sex is implied). A wife tells her husband she is pregnant and he hugs her.

VIOLENCE/GORE 3 - A few graveyard scenes show people putting flowers on graves. An outdoor graveside funeral service features a few women crying and an older woman flinching at the four-rifle salute fired for her son, a US Marine killed in battle; after weeks she and a pastor sit on a bench at her son's grave where they cry briefly and hug. An elderly man lies in a hospital bed with IV lines, an oxygen tube, and electrode wires from machines attached to him; his relatives cry in the hallway as a pastor prays with him.
► At the scene of a building that has burned to the ground, with flames still burning, an elderly man struggles with a fireman to be allowed into the house to rescue his family; a fireman enters the flaming remains in full suit and ventilator helmet to find some sort of large marionettes and when he returns outside, he sees the elderly man lying on the ground with a medic applying defibrillator pads and the scene ends.
► We hear that a little boy threw up in the family car and we see him bent over the toilet at home and his sister bent over the bathtub while their mother says they are vomiting and we hear retching but see no vomit; the boy is still sick four days later, with red eyelids and sunken eyes and a spiking a fever of 104 degrees before his parents rush him to a hospital, where a doctor puts the boy through an MRI machine and says the appendix burst days ago, filling his abdomen with infection; medical personnel run through a hallway with the boy on a gurney to surgery and his parents cry in the waiting room and in the chapel where the father shouts at God and throws a chair down the aisle.
► A man suffers a compound fracture of the tibia and we see a bloody gag as he shouts in pain; after a few weeks he collapses in pain while standing in a pulpit at church, groaning that his back is very painful; we then see the man in a hospital bed, where a doctor tells him he has kidney stones again and the camera cuts to the man at home, shouting in pain from behind a bathroom door and yelling that he passed seven kidney stones.
► A boy's spirit floats above his body on a surgical table: we see the boy with a large tube down his throat and taped to his face while lying on the table from the spirit's point of view three times, and a square of skin shows at the abdomen through surgical cloth, where a doctor points a scalpel; the camera cuts to scenes of church members praying, then to the spirit of the child entering a church and seeing clouds, mists, blue sky, and angels with indistinct features and slowly flapping wings, singing; Jesus appears (we do not see his face) and takes the boy's hand to meet others in Heaven, whom we do not see. Jesus appears in a boy's yard and introduces him to a little girl without a name and weeks later the boy sees the clouds, mists and sky of Heaven in the corner of a church altar area where a deceased Marine appears for a second, smiling and then vanishing.
► Two boys in a schoolyard bully a little girl and throw a dodge ball into the back of her head; she turns, picks it up, hands it back to one boy, and punches both of them in the nose, knocking them down (they hold their noses and writhe in pain). A couple fights loudly in a kitchen, each throwing glass dishes and cups into a sink to break them in anger; in the basement the husband kicks his office chair across the room as they argue about whether Heaven is real. A pastor argues with his church board insisting that he stop talking about a real Heaven; the following Sunday in the pulpit he tells the congregation that people often ignore the heaven on Earth that reveals itself, choosing the hell of hate instead causing some men and women to cry.
► A little boy visits a dying child in a hospital, where dozens of angel figures sit on a counter nearby and paper angels hang on a mobile; the child in bed wears a knit cap, frowns and has sunken eyes, but smiles when the little boy holds his hand and says everything is OK.
► A docent at a botanical garden rests a tarantula on the hand of a little girl; a little boy declines to touch the spider, but returns another day to do so.
► A psychologist states bitterly that she watched her husband die and that religious faith does not help in that situation. A little boy tells a reporter that he saw marks (nail marks) in the hands and feet of Jesus; he tells his mother that he met his sister who died in miscarriage ("she died in your tummy") and the woman cries. A firefighter tells another firefighter that he should ask Jesus not to walk on water, but to dump the water on fires for them; the man stares for a few seconds, turns, and walks away. During a pastor's sick leave, a church board member makes a sour face at a substitute preacher and says, "I'm going to kill somebody." A wife jokingly tells her husband that she will whip him like a dog if he howls while she and the church choir sing again.

SUBSTANCE USE - Several patients in hospitals receive oxygen and unknown medications in tubes and IV lines, and a doctor tells a man in a hospital bed that a painkiller will help with kidney stone passage (we do not see any medications).

MESSAGE - Some people have seen Heaven. 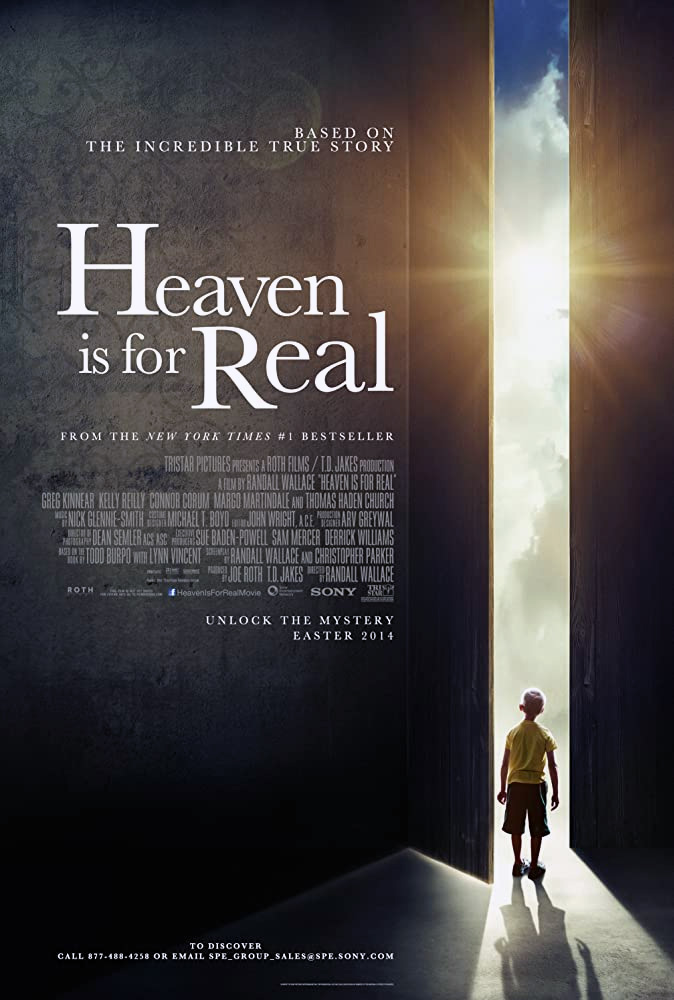