Shunned by his family and community for being different and "not quite penguin" because while he can tap dance very well he cannot sing at all (a requirement for penguin success) an Emperor Penguin leaves, hoping to uncover the reason for the disappearance of all of the fish and thus be welcomed back as a hero. With the voices of Elijah Wood, Robin Williams, Brittany Murphy, Hugh Jackman and Nicole Kidman. Directed by George Miller, Judy Morris & Warren Coleman. [1:38]

VIOLENCE/GORE 4 - A penguin stands alone on a small piece of ice, the ice is bumped a couple of times by something underwater, a leopard seal comes out of the water and tries to snatch the penguin, the penguin struggles to get away, swims fast through the water, and the seal follows snapping it's sharp teeth; the seal chases the penguin under the ice, then crashes up through the surface, bites the penguin's tail (and spits out feathers), but when the seal tries to grab the penguin it slams its face into the ice, gives up and slinks away.
► A huge ship breaks through ice and advances toward several penguins; one penguin falls into the water and is sucked into the propeller, but it is thrown back out without injury.
► Two killer whales play catch with a few penguins, tossing them back and forth through the air; the whales jump high into the air, they collide and fall back into the water (one whale has large gashes on its back).
► A penguin catches a fish while swimming, a bird snatches the fish away from the penguin, the penguin jumps out of the water and catches onto the fish as the bird flies away, they struggle over the fish in mid-air, the bird lets go and the penguin crashes to the ground (the penguin is OK).
► Four large birds surround a baby penguin and threaten to eat it. Four birds lunge at a baby penguin, the penguin falls into a hole and the birds try to peck at it (they cannot reach it and they fly away).
► Several penguins walk through places they have never been to, while trying to discover what is killing their food; they walk through a heavy windstorm, and through an abandoned mining village.
► Several penguins slide down a glacier and through ice chutes, large pieces of ice break off the glacier and fall into the water, and the penguins fall into the water along with the ice and a large piece of machinery. Penguins fall into water and large hunks of ice begin to close above them (they all manage to get out before they are trapped under the surface).
► A penguin slides down a glacier, knocking other penguins as it goes and falls into water. A bird flaps its wing striking three other birds a few times.
► A penguin has a 6-pack plastic holder stuck around its neck and it begins to get tight enough to make it hard to breathe.
► Many penguins press together in a group to shelter themselves from a heavy blizzard. A huge helicopter flies over a penguin community and the penguins are frightened briefly.
► Several penguins are told that they will be "ground up and made into fun food." A bird describes being captured, and injected with something and tagged. A penguin makes a remark about a penguin's "foreign friends." A bird and a penguin refer to "alien abductions" in several scenes.
► Many baby penguins hatch by poking out of their eggs, but one egg is quiet and still and the adults around it begin to fear that it is dead. A father penguin panics when a baby runs into a crowd of penguins and it is out of sight. A penguin drops the egg that it is nesting on his feet, the egg rolls away, it picks it up and returns to the group.
► A scene with elephant seals has them with very deep voices and they act in a threatening manner toward the penguins.
► A mother penguin regurgitates food into a baby's beak.

MESSAGE - Humans must pay attention to nature's delicate balance, or we will destroy the environment. 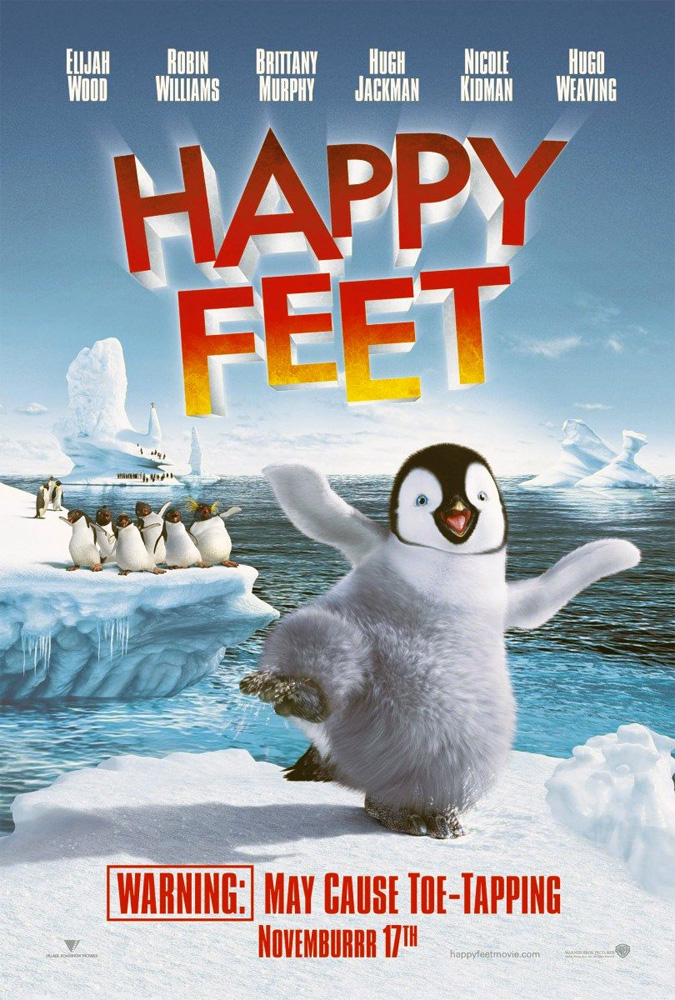