Based on actual events, it is the story of Auschwitz's twelfth Sonderkommando -- one of the thirteen consecutive "Special Squads" of Jewish prisoners placed by the Nazis in the excruciating moral dilemma of helping to exterminate fellow Jews in exchange for a few more months of life. With David Arquette, Daniel Benzali, Steve Buscemi, David Chandler and Allan Corduner. [1:48]

SEX/NUDITY 6 - A room full of dead bodies shows bare breasts, pubic regions, bare buttocks. We see piles of dead bodies all of whom are nude and we see bare breasts, pubic regions of the women and bare buttocks of the men. Many nude bodies are shown as they are placed on tables prior to cremation. Men and women undress before going into a "shower" room.

VIOLENCE/GORE 9 - A group of men are lined up against a wall and shot in the head one-by-one and we see them each slump to the ground. A man is put into a fire while still alive; we see him kicking and hear him screaming. We see a room full of people panicking, screaming, gagging and falling to the floor as gas begins to fill the room. Men go into a room filled with dead bodies (after they have been gassed), the walls are stained with blood, and pull the bodies out for "processing." Dead bodies are piled up and thrown into fires burning in a field. We watch as men lift bodies one by one on a table where they are then shoved into a fire and burned; one such scene describes a man having to push his own family into the fires, which drives him to commit suicide. People are ushered into a "shower" room and locked in: we hear them screaming as gas begins to fill the room, we hear them panic, pound on the doors and plead. A man beats a man to death with his bare hands while a woman watches and screams in terror; we see the man lying in a puddle of blood and the woman is shot in the face. We see piles of dead bodies being loaded onto a truck. A young girl is shot as she runs away. A man covers a man's face with a pillow and smothers him; we see the man struggling and kicking and then he goes limp. A woman is shot in the head, then another and another (we see many dead on the ground), a woman grabs a guard's gun and shoots herself and another woman runs into an electtrified fence and kills herself. Many men lie on the ground and are shot one after another; we see their bodies jerk as they are hit. A group of men crowd down a hallway but are shot in their tracks and pile up on the floor. Explosives are set and begin to ignite with men still inside a building. We watch a guard drop something through a chimney and begin to hear distant screaming (we gather that they are gas pellets and people inside are dying). A woman is bruised and bloody after being tortured for information; we hear her screaming from behind a door. A woman lies dead on the floor with a bruised eye and a bloody bullet hole in her chest. Men cut the hair off dead bodies and hang it on a string to be cleaned or dried, and a man pulls the gold out of the teeth of dead bodies with a pair of pliers. A dead body lies on a table in a morgue. We hear a girl's voice talking about her body being put into the fire and being burned and her smoke going into the sky and her ash falling on the men who were working in the crematorium. We watch men shovel piles of char into a truck (presumably ashes from cremated people). A man is shot at and punched in the face. Men in a building are fired upon and some are hit by men outside the building, they fire back and some are hit, the roof of the building begins to collapse from all of the bullet holes and the men scramble to reach a safe place. Several men stand over a man in a bunk, pronounce him dead and cover him with a sheet. We see trainloads of people (women, children, men, elderly) being transported into the death camp. A girl is given several injections to revive her; she has a bloody nose, she coughs, sneezes and vomits. Soldiers threaten prisoners with whips and dogs. There are references to and discussions of people being processed through a crematorium. We hear about other violent acts: a man says "three men were shot," a man talks about medical research being performed on corpses, men talk about the volume of bodies being "destroyed." We see fires flaring and burning in the chimneys of the crematorium throughout the movie. A man yells at another man and spits in his face. Men argue and yell at each other. We see a gallstone in a jar of liquid and a man talks about saving them for another man's collection. A man vomits and gags. A building begins to explode and fires rage.

MESSAGE - We don't know what we are capable of under extreme circumstances. 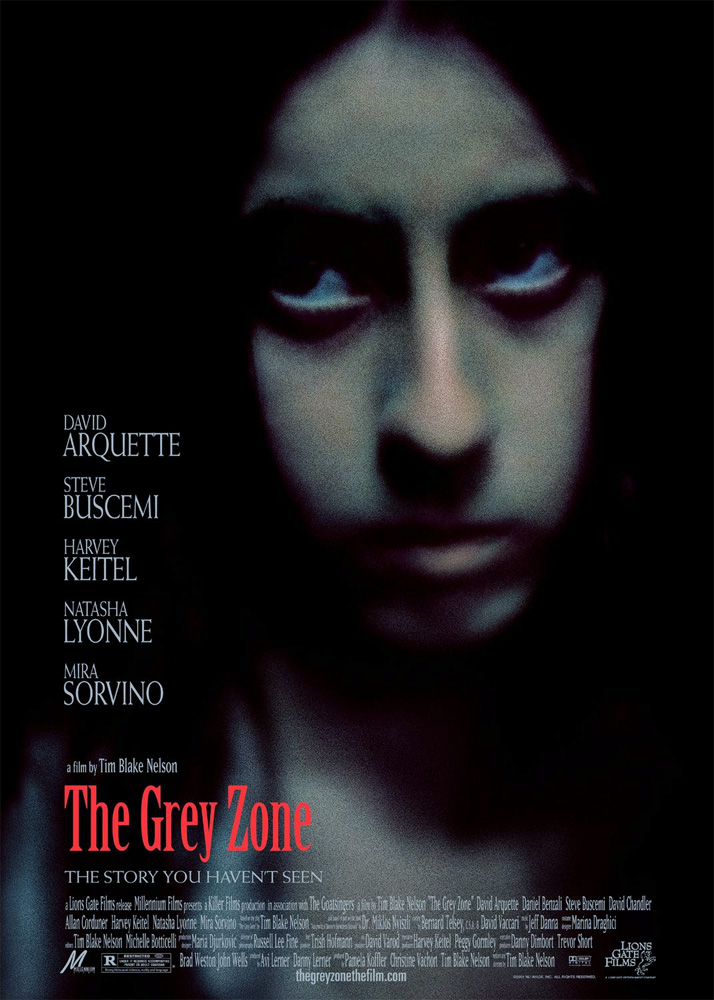