SEX/NUDITY 5 - Dancers in a hair show writhe and perform pelvic thrusts in a short sexually suggestive dance. Three woman bounce up and down on their feet on camera in a game show to show whether their hair and breasts are real and the female show host points at the chest of one and says, "See, it just sits there."
► On stage at a hair show, a man lies on a bed with 5 scantily clad models in bikinis, the man gets up, strips down to white biker shorts, puts on a sleeveless tank top and long sweat pants and the models rub his bare chest briefly.
► Briefly, we see two gymnasts perform at a hair show as living statues; the male is wearing only short shorts and the woman is wearing a bra and loose shorts.
► In several scenes, a male hair stylist wears women's high heels and spike-heeled knee-boots. A photo of two men embracing is flashed on screen as a woman says she designed her hair show around the film "Brokeback Mountain."
► In a barber shop, men talk about having sex with women in five different instances, each time being forbidden to touch the woman's hair and three men say they prefer sex and relationships with women of another race because they can touch their hair. A voiceover states that a stylist's entry in a hair show was once disqualified for nudity. A beauty school president tells his graduating class, "If you removed all the clothes sold to you by others than Blacks, we'd have a nudist colony in here." In several scenes, men and women state that African-American women feel they need straight heir in order to be attractive.
► During on-stage hair show scenes women wear either mini-skirts that reveal full thighs or bikini underwear and bras that reveal buttocks, thighs, legs and cleavage, or long slit skirts that reveal legs to the hip; two women are shown from the side, nude above the waste and we see the full side of one breast, several men wear tight swim trunks only, other men wear tight short-legged, sleeveless swim skins that reveal moderate bulges in the groin area, and a man states, "You don't need choreography when you have hot models with no clothes on." Dancers in a show wear skimpy outfits that reveal bare abdomens, arms and legs. A film clip shows male and female dancers in short loincloths, revealing thighs and buttocks, and the men are bare-chested and the women wear bra-like tops that reveal some cleavage. A film actress displays a bear paw tattoo on each breast that shows above her low-cut top. A brief shot of a photo shows a woman nursing an infant.

VIOLENCE/GORE 3 - Several barber shop, hair salon, and beauty school scenes show men, women and children having cream hair relaxers put onto their hair: children frown, one man states that you have to be careful or your hair will burn off, many women say that the relaxer experience feels like the scalp is on fire, a beautician states that a layer of skin on the scalp is actually burned off, we see a photo of a huge scab on the scalp of a bald woman, and a man explains that often the scalp becomes covered with scabs after the procedure, even if the hair does not fall out. Two three-year-old girls undergo chemical hair relaxation against their will: one of the girls says, "Everybody is supposed to do it" and that she does not like it and we hear that the process is often called a "perm" and it burns, even when a kids' milder formula is used. A dermatologist is interviewed, stating that perming a child from the age of 18 months to 6 years old can destroy hair follicles, that perming can burn the scalp at any age and cause permanent hair loss and this process of "relaxing" hair is physical torture.
► Human hair is gathered from a temple by manufacturers and taken to a small factory, it is dumped on the floor from 30-gallon garbage bags, elderly women pull tiny dead bugs out of it, comb out the hair, and men and women sew it into strips of long hair fringe; the sewers sweat as they work in an unventilated room. A baby in a Hindu temple is forced to have its head shaved, and the child screams and cries.
► A man receives Botox injections and we see the injections and dots of bloods on his forehead and face: his face swells and turns red as he uses ice packs and says, "I feel like I've been attacked by a thousand killer bees."
► People in India are encouraged by Hindu temple staff to have their hair clipped off and heads shaved at the temple; we see many children being forced to undergo this procedure against their will, they frown and look scared while a voiceover states that 85% of people have this done twice in their lifetimes, receive no compensation, and manufacturers take the hair at no cost.
► In a barbershop discussion, men cannot decide if it is worse to have a perm that burns or to be shot; one man says he was actually shot in the face once. Women in a beauty shop all agree that childbirth hurts worse than the heat from a perm, however, one woman says her last perm was so horrible that she cried at the burning pain. An Indian man explains in an interview that people steal hair in India; when women fall asleep, someone might come in to the room and cut off their hair and sell it or in a movie house, someone sitting behind a woman with long hair can cut it off right there and run out with it. A man says that if an African-American person moved into another ethnic community and set up shop to sell them their own ethnic products, the African-American person would be shot.
► A merchant carries a suitcase filled with hair lengths into a distributor and sells them; large heaps of human hair cover the desk. In a beauty shop, long clumps of cut hair are swept out into the street, where they gather debris and roll down the street like tumbleweed. A man takes a garbage bag filled with wigs made from African-America hair into various hair shops and tries to sell them; three shop owners make disgusted faces and say no one wants "Black hair."
► In a laboratory, two men look at pop cans soaking in sodium hydroxide (hair relaxer): after one hour the can has become transparent, and after four hours it has disintegrated. One scene shows a man in a smock and goggles mixing a 7,000-pound batch of a chemical while being told by a supervisor that eye exposure will cause blindness and breathing its fumes will permanently damage the lungs.
► A short 1960s protest film clip depicts people marching and protesting white supremacy groups in North Carolina and police standing by with weapons drawn.

SUBSTANCE USE - A man shakes hands with a little girl with the parting comment, "Stay off the pipe," a woman says that she might have to be high in order to allow anyone to touch her hair, sodium hydroxide hair relaxer is referred to several times as "creamy cocaine" and an addiction for African-American women, a man says that for African-American women buying new high-priced weave hairpieces is an addiction and another man replies that the hair pieces are like pornography in their addictive potential. A man sips water from a cocktail glass with a cocktail pick in it. 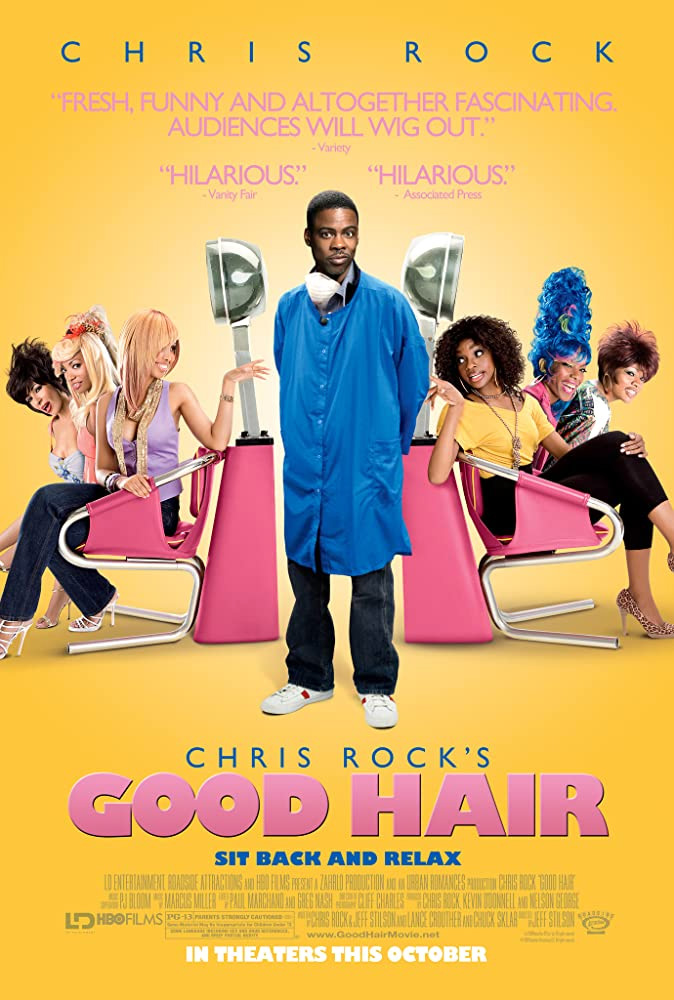