A woman (Amanda Seyfried) becomes concerned when her sister (Emily Wickersham) disappears one evening. She's certain that the serial killer that kidnapped her a year ago has come back and has taken her sister, as well as other girls. When she plans to face him down, two detectives (Daniel Sunjata and Wes Bentley) don't believe there is a serial killer. Also with Jennifer Carpenter, Sebastian Stan, Socratis Otto, Joel David Moore and Michael Paré. Directed by Heitor Dhalia. [1:34]

SEX/NUDITY 2 - A woman stands behind a translucent shower door and we see the full outline of her body. A woman wears skin-tight jeans and a sleeveless top that reveals bra straps and cleavage. We see snapshots of several female crime victims wearing sleep shirts that reveal cleavage (please see the Violence/Gore category for more details).
► A detective tells another detective not to chase women ("split-tails") at work, because only firemen chase women like that. A male and a female officer in a cruiser discuss sex: he says he had sex (using a crude term) with his sister-in-law, that his wife does not know, and that the sister-in-law won't tell his wife because then he would not have sex with her any more; the female officer says a wife is an accomplice to adultery if she lets it happen more than once.

VIOLENCE/GORE 5 - A woman drives to a dark forest at night, following a man's directions through winding roads: she walks to a clearing and sees a broken cell phone and an empty syringe, she looks into a deep hole in the ground and sees a dead woman with blood on her head, someone pushes her into the hole, and a man climbs down into the hole and tries to attack her using a long stone knife; she kicks him in the knees twice, draws a handgun and shoots him three times (we see some dots of blood and he is knocked down), she climbs out of the hole, looks back into it and shoots the man in the knee as he whimpers (we see a little blood), and then she pours kerosene into the hole, tosses in a lit camping lantern and walks away as we see the hole erupt in flames and hear the man scream loudly twice. A woman shoots a man three times and throws the gun into a thick forest from her car.
► Several flashbacks show a woman awakened in bed at night by a man duct-taping her mouth and chloroforming her: she is then shown in a deep hole in the woods, where she removes the duct tape with her teeth and fingers, finds a human shin bone and screams, finds a hairclip attached to a long lock of brown hair, she digs in the dirt and finds jewelry and small pieces of what could be human or animal skin; a man climbs down into the hole and she subdues him with an arm lock and a punch, she climbs out and escapes. An unconscious woman awakens in the crawlspace under her front porch to find her mouth duct-taped and wrists taped together; we see dirt, cobwebs and spiders as she pulls the tape off with her fingers and teeth, kicks open a thin door that was nailed shut and releases herself; she approaches friends and police officers at her house, cries and shouts for them to find her sister.
► We see several snapshots of college women arriving in the mail of a police supervisor; the women are shown with duct-taped mouths and bound wrists, dirty and unconscious, and under the photos is a map showing where they are buried in one large, deep hole.
► Several car chases by police following a woman involve erratic driving, vans and cars nearly hitting one another, screeching tires, sirens, cursing and shouting; there are several stops at houses and businesses where police draw their guns, but do not fire.
► A woman questions two men and argues with both of them, threatens one of them with a gun, gets in her car and nearly runs the two men over as she races away. A woman pulls a handgun from a dresser drawer and places it in her tote bag; she later points it at men and women she questions about a possible crime. A woman uses an arm-lock takedown effectively on two different men she feels might attack her (the men are surprised and they shout in pain).
► In a Krav Maga self-defense class, we see women and men attack partners and get punched, pinched, knocked down, arm-locked, pounded hard with fists and eye-gouged (we see some reddened skin on faces and arms); an instructor pulls a woman off a man and tells her to cool down.
► A woman in a police station argues with a panel of detectives about her sister's kidnapping and they belittle her; she cries, shouts several times, leaves and when the detectives call her cell phone, she tells them to leave her alone until a serial killer is dead.
► Throughout the film, a woman is hyper attentive to her surroundings and wary of being kidnapped a second time (her first time was a horrible ordeal that took place one year earlier).
► We hear that a mother died of cancer, that a man and a woman died in a car crash, and that an older woman died, leaving her husband a weird insomniac. A woman rents a private vehicle from a man and tells him if she does not return in the morning, it means she's dead. A police supervisor warns his team that a psych patient is on the loose with a gun and could get them sued for wrongful death.
► In a filthy hotel, a woman enters a room and finds a workbench with duct tape and dry dog food on it and she finds a large dried bloodstain on the floor.

SUBSTANCE USE - A woman asks another woman if she needs" ups or downs" to help her study (implying drugs) and the woman says no, a woman takes two pills at work with soda and throws away three remaining pills, a woman tells a friend that she is not crazy and that the police want to lock her up and make her take more pills, we hear that a serial killer drugs college-aged women and abducts them, and we see a close-up of an empty syringe. We hear several times that a woman is a problem drinker or alcoholic (we do not see her drink alcohol).

MESSAGE - Victims of crime sometimes are mistakenly diagnosed as being mentally ill. 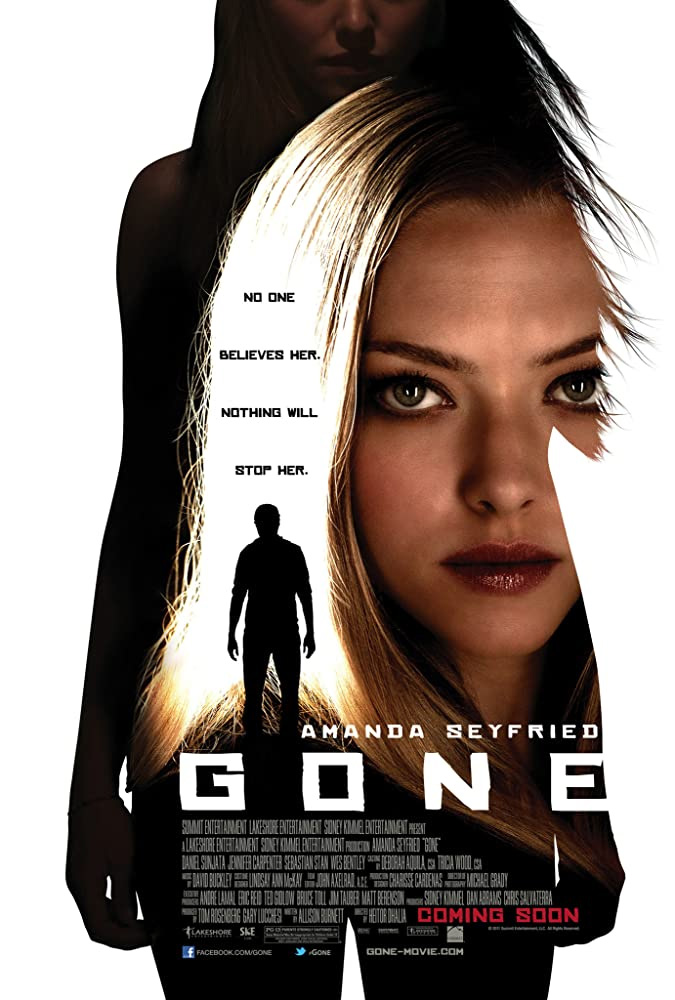